We'd been wondering how Barnes & Noble would respond to the $199 Amazon Kindle Fire at its Nook event next week, and it looks like we have an answer: the $249 Nook Tablet.

We'd been wondering how Barnes & Noble would respond to the $199 Amazon Kindle Fire at its Nook event next week, and thanks to a very prolific tipster, it looks like we have an answer: the $249 Nook Tablet. Externally it looks like a slightly thinner and lighter Nook Color, but the real action is on the inside, where there's a faster 1.2GHz dual-core TI OMAP4 processor and 1GB of RAM, as well as 16GB of built-in memory with an expansion port. That's just a hair faster than the Kindle Fire, but what really matters on a tablet like this is access to content, and B&N apparently thinks they have it covered, boasting of two million books, "thousands" of apps, and HD videos and TV shows from Netflix and Hulu Plus. Interestingly, B&N also seems to be taking direct aim at Amazon's Silk cloud-accelerated browser, with one slide noting that the Nook's browser "isn't monitored." Cheeky.

Hit the source links for more leaked slides, and check out our product comparison between the Nook Tablet, Nook Color, and Kindle Fire. 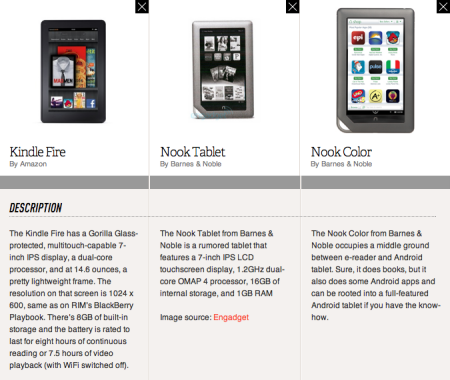