Adobe's photo editing and sharing solution will sync photos between your Mac, iPad, and iPhone. But are its cloud capabilities more trouble than they're worth?

Adobe Lightroom is my photo management tool of choice, and I have been yearning for an iPad version of the app since the summer. Adobe Carousel isn't quite Lightroom for iPad, but rather a watered down, cross-device photo editing and management solution that uses the cloud to make your photos available anywhere.

I've been taking Carousel a spin ever since it was released on the Mac and iOS App Stores last week. Is this the ultimate cross-platform photo tool that the world has been waiting for? Keep reading to find out. 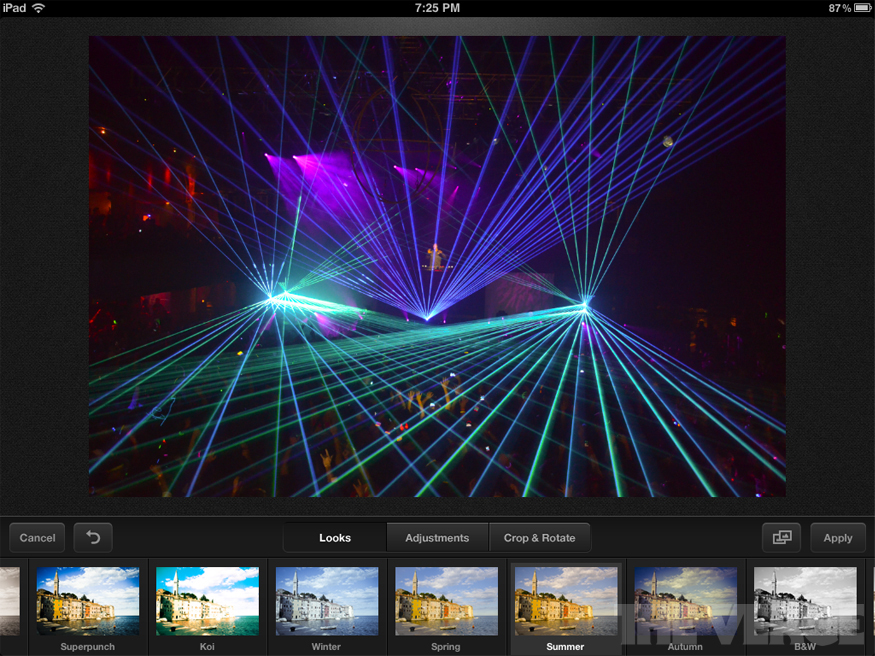 Carousel has a standard user interface that is virtually identical on iOS and OS X Lion. (Windows and Android offerings are in the works, but there's no ETA.) Photos are organized and sorted by date into horizontal strips of thumbnails that scroll sideways. Adding photos is as easy as clicking (or tapping) the plus sign in the upper left hand corner, at which point your originals are uploaded to Adobe's servers for safekeeping. They can be deleted just as easily, disappearing from all your devices in one fell swoop. You can take a new photo from directly within the app on any iOS device with a camera. In full-screen mode, Carousel on Lion is a virtual clone of the iPad interface, and we're told that this feature factored in to its lack of (Snow) Leopard compatibility. Also, while the iPad app works in both orientations, the iPhone version only functions in portrait.

Most users will find Carousel's simple interface to be approachable and intuitive, but it's not without flaws. For example, I found myself scrolling sideways excessively, and there's no way to re-arrange photos once they are imported. Similarly, there are no other view modes besides the thumbnail strips, so users with large photo libraries will likely be frustrated by these limitations. The problem is even more obvious when using a trackpad, which requires two finger inverted scrolling.

It's also important to mention that all photos are shown at "screen-resolution" (around 1440 x 900) in order to minimize data consumption for simple photo viewing. Clicking a thumbnail brings it up fullscreen, at which point you're presented with options to favorite, develop, or share. 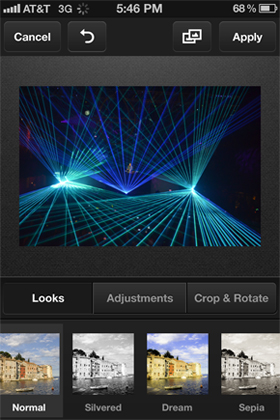 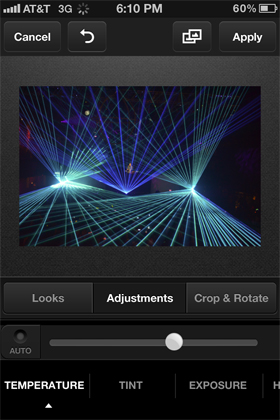 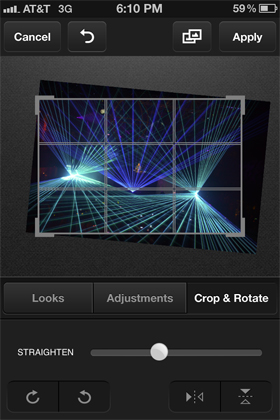 The develop screen contains nearly all of Carousel's core editing functionality, and allows you to make adjustments, crop and / or rotate, and apply "Looks." Once you enter develop mode, a full resolution version of the photo is downloaded for precision editing. (Yes an internet connection is required, but more on that later.) Looks are Carousel's equivalent of presets, which allow users to quickly choose and apply a motif to a photo. (They're similar to Instagram filters.) Carousel currently has 17 built-in looks — all curated by Adobe — but we're told that the company is "exploring" other options for user-submitted alternatives.

You can also make more precise edits to photos from the Adjustments tab, which has three sliders for white balance, exposure, and contrast. Each action can further be expanded by toggling the opposing arrows button to reveal even more detailed controls. For example, expanding white balance lets you adjust temperature and tint. There are Auto buttons for the less photography-inclined, but every setting can be manually tweaked. Pinch-to-zoom works for cropping as you would expect, though the rotating gestures do not work in place of the on-screen controls for changing a photo's orientation. 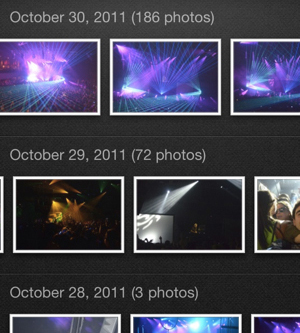 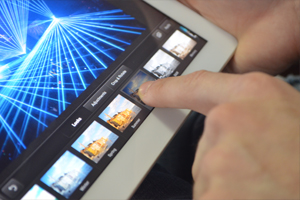 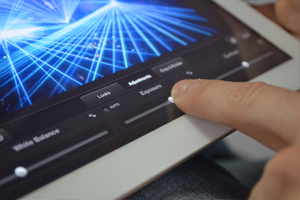 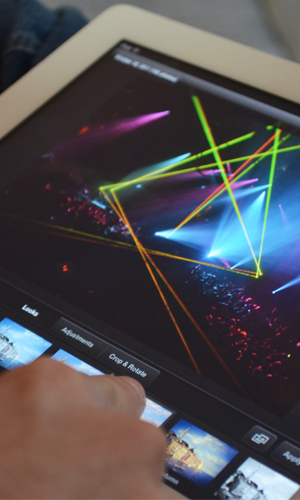 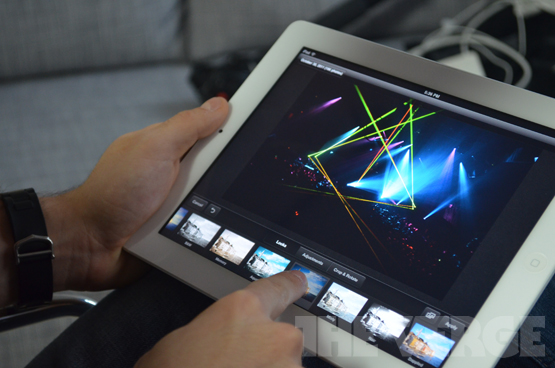 Carousel lies somewhere in the middle on the spectrum of consumer-friendly apps like iPhoto and Picasa and professionally-oriented ones such as Aperture and Lightroom. Its layout is quite simple and importing photos is designed to be as easy as possible, but you can also get fairly advanced in manual editing. It lacks the specialized tools and more advanced features of Lightroom or Aperture; for example, none of the labeling or rating options from Lightroom — or even iPhoto — make it into Carousel, which only lets you mark photos as favorites. As someone who uses that functionality religiously in Lightroom, I found myself longing for more robust sorting options. There's also no way to rearrange photos into folders or organize them besides by date — basic capabilities even found in iPhoto.

Since photos are only cached at screen resolution, any time you'd like to edit a photo, you're forced to wait as it downloads the original file from the cloud. Load times for high-res JPEGs averaged 10-15 seconds, though there were photos that took upwards of 20 seconds to fully download. This is one of the unfortunate downsides of Carousel's cloud-backed infrastructure, and sure to be a pain point for people planning to edit large batches of photos quickly. Of course, these figures are sure to vary based on your network connection and original file size, but it's a definite tradeoff over traditional locally-stored options. Even though lower-res previews are cached on your local device for offline viewing, a network connection is required to make any edits.

Carousel's claim to fame is its "real-time" cloud syncing, and in my testing, changes were pretty quick but certainly not instantaneous. The "Status" tab at the lower right of the app revealed that Carousel recognized the changes made on other devices almost instantaneously, but the actual time to upload or download the changes was held back by the network connection.

It's also important to note that Adobe is departing from its usual distribution method with Carousel, offering the apps as free downloads and instead charging a subscription fee for photo storage. Each paid account is given a maximum of five carousels, each of which can be shared with five more individuals. So if you do the math, up to 25 users can use a single, $6 per month account. You can download the app on any iOS device and login with your Adobe ID, and instantly have access to all of your photos. There was one particularly annoying bug that required me to re-login at seemingly random launches, but hopefully that will be addressed in a future update.

Carousel shows promise in its current form, but it has a long way to go

Adobe Carousel shows promise in its current form, but it's certainly only right for a select crowd. It's only OS X Lion and iOS compatible, and those users already have a lot of options. Power users will likely be put off by its lack of customizability and user-inputted presets, and people with with large photo libraries will be bogged down by its clunky navigation and lack of folders and rating options. The cloud-centric backend is supposed to be its claim to fame, but it has unexpected downsides on the app's speed and real-world use. That's not to say Carousel won't become a hit with the point-and-shoot crowd just getting started with photography, but Lightroom-experts and Aperture-heads will find themselves pining for more. Perhaps a future revision or an in-house Aperture or iPhoto port for iPad will finally get me to give up my laptop, but for now Carousel won't be replacing Lightroom.