Rokker.fm is a free web-based music service that browses and plays music videos from YouTube, and you can now try out the public beta which launched today. The service looks like a simplified version of Grooveshark but with considerably fewer options — all of the songs come directly from YouTube and functionality is limited to creating playlists (there are no radio stations or social features). Videos play in a small box in the bottom left corner of the browser window, and there's currently no way to enlarge them without watching on YouTube. Also note that as of now you'll only be able to use Rokker with Safari or Chrome.

While the service is not as robust as something like Grooveshark, it's pretty good for what it is — a YouTube skin that curates music content and auto-sorts album playlists. If you get most of your music from YouTube anyway, Rokker is a great option that will allow you to queue up your tunes without having to search for something new after each track. Additionally, there don't seem to be any added regional restrictions, so if you can watch the video in your country on YouTube, you'll be able to add it to a playlist on Rokker.

Go check it out and let us know what you think.

Update: in addition to the web interface, the developers are planning apps for iOS, OS X, Windows Phone, and Android. below, find two screenshots of the Rokker app running on an iPhone: 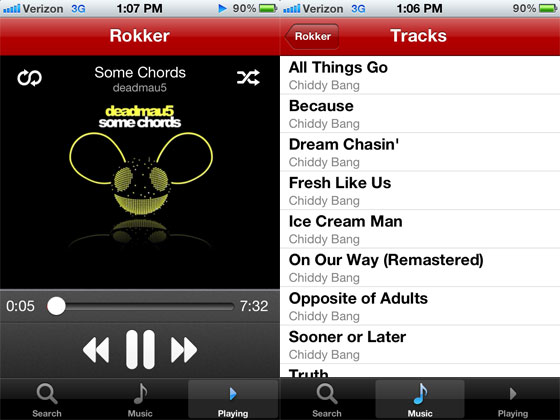