The cheaper half of Samsung's two-tier Windows Phone 7.5 strategy for AT&T packs quite a bit into its smaller, 3.7-inch frame

Whereas Nokia's Lumia 800 is standing tall as the flagship Windows Phone 7.5 device to lead out 2011 for Europe, the selection of new Mango devices is decidedly more competitive in the US. Samsung is taking a very strong two-tier approach with its Focus S and Focus Flash for AT&T. The former is being promoted as a 4.3-inch premier device for $199.99 on contract, while the latter Flash is priced at an entry-level $49.99 with a smaller frame and 3.7-inch screen.

But are looks and price points deceiving? The Focus Flash, after all, still has a 1.4GHz processor, a bright Super AMOLED screen, and HSPA+ connectivity. Is "entry level," then, an unfair moniker here — or are there other unfortunate compromises? Read on to find out!

Samsung chose sharper corners for the Focus S, with the front curving inward to a smaller rear profile. It's a welcome design choice that helps it somewhat stand out from the pack, and it fits comfortably in the hand. Weighing at around 4.1 ounces, the Focus Flash is actually just slightly heavier than its bigger brother but also lighter than the Lumia 800. It also falls right in the middle in terms of thickness — at 0.43 inches, it's thicker than the 0.33-inch Focus S but thinner than Nokia's 0.48-inch offering.

The front of the screen is one solid pane with the display slightly recessed, but despite the gloss, fingerprints don't show up as obviously as on some other devices I've reviewed (here's looking at you, Xperia Play). On the top right corner is the front-facing camera, and between that and the screen lies AT&T's predominant logo. Samsung puts its own signature just below the screen and above the three Windows Phone hardware buttons — and bezeled home button surrounded by capacitive back and search buttons, respectively.

Along the right side of the device, there's a dedicated camera button near the bottom and a power button near the top; opposite that on the left side there's a dedicated volume rocker. Each button has a distinct wiggle that you can test yourself through light touching and tapping. There is a 3.5mm headphone jack on top and a MicroUSB port on the bottom. The back is plastic with a strip of faux sheet metal — for as best as I can tell just an aesthetic look — and above that there's a 5-megapixel camera with adjacent LED flash. Popping off the back panel reveals a 3.7V / 5.55Wh Li-ion battery There's a SIM card slot and absolutely no apparent microSD slot.

The casing has a cheap look to it and does feel plastic-y, but at the same time it also feels fairly sturdy. The obvious caveat to any qualms is the $49.99 price tag, but even without noting that, the Focus Flash isn't in too terrible shape here. 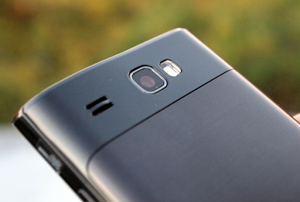 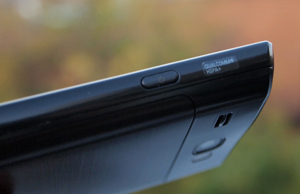 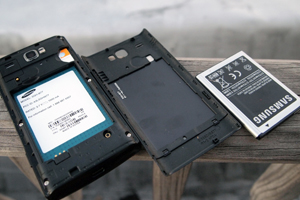 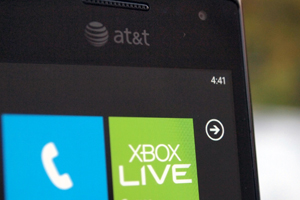 For all our (relatively few) qualms over the chassis itself, Samsung equipped the Focus Flash with a surprisingly nice 3.7-inch Super AMOLED display that really complements Windows Phone's bold colors. The black isn't always as dark as it should be, but under most of the interior lighting situations I tried, it bleeds convincingly into the hardware itself. This was less true outside during the day light, where the glossy front pane of the Focus Flash proves to be very reflective. That said, provided external light sources don't catch and bounce off the screen, both the horizontal and vertical viewing angles are quite impressive.

The Focus Flash has the same 800 x 480-pixel resolution as its Windows Phone counterparts despite its smaller screen size, which actually gives it a better pixel density — approximately the same 252ppi as Nokia's Lumia line and almost 17 percent denser than the Focus S' 217ppi.

Spend a few minutes with the 5 megapixel camera and you'll know exactly where Samsung cut corners to reach that price point. I spent a couple days and nights shooting pictures under various conditions, and the results were never too pretty. Colors looked consistently washed out, and far too often the shot would come out blurry — even for still subjects and even after multiple retakes.

There is a 720p option for video, but the Focus Flash I had defaulted to VGA and seemed to return to that lower-res option on its own a couple times. After recording a few videos on both resolutions, I kind of see why — the VGA video turned out a bit cleaner, while the graininess of the 720p footage was more apparent.

Button placement is another concern. Far too often I found myself accidentally hitting the search and back hardware keys while lining up my shot, which means I'd have to maneuver my way out of the erroneous windows and set up my shot once more. If you prefer using your phone to take quick day-to-day pictures over a dedicated pocket camera, this probably isn't the device for you. 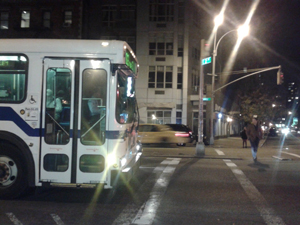 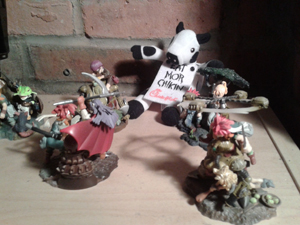 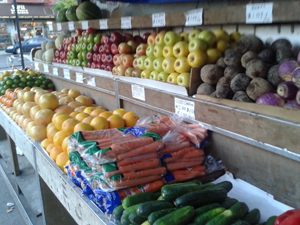 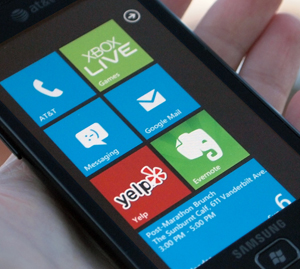 Thanks in large part to its 1.4GHz processor and 512MB — more or less the same internals that the other Mango devices have — the software runs just as smoothly as its competition. In fact, if your only concern is finding a cheap device that runs Windows Phone 7.5, you can't do much wrong here.

With that all said, I'm going to defer to Chris Ziegler's excellent Mango review from back in late September, as not much has changed since that time (appropriately enough, we were given a Samsung Focus, this device's predecessor, to test out the updated platform). Microsoft is continuing to evolve the OS in all the right ways, but it still hasn't quite matched the functionality of its iOS or Android peers. It's a gorgeous and stylish user experience, but it only takes a few minutes before you come across some oddities — no mass transit option for Bing directions, quirky multitasking that seems all too quick to close some earlier apps, a hardware search button that takes you to Bing instead of searching inside the currently-open application. The app ecosystem is quickly improving and again Microsoft is making all the right updates, but it's still not yet at the level of its competition.

Much to our surprise, the Focus Flash lasted almost two days on moderate-to-heavy use on medium brightness. I wouldn't be surprised if many people out there will be able to pull off an entire weekend without charging the phone.

Call quality, on the other hand, wasn't quite up to par — it wasn't what I'd call bad, but it wasn't that great, either. I took the phone for a walk from midtown to lower east side New York, and although no calls were dropped, everyone I spoke with sounded slightly tinny. At times, the volume felt lower than expected, too, no matter how high I'd raise it. There were about three blocks that I couldn't get any data or calls to go through, but that area was just as bad on my AT&T iPhone 4, so I'm going to blame the carrier for that one. 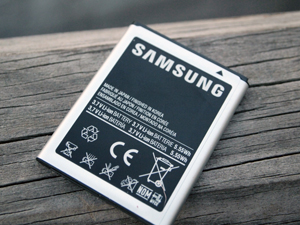 Our review of Samsung Focus Flash 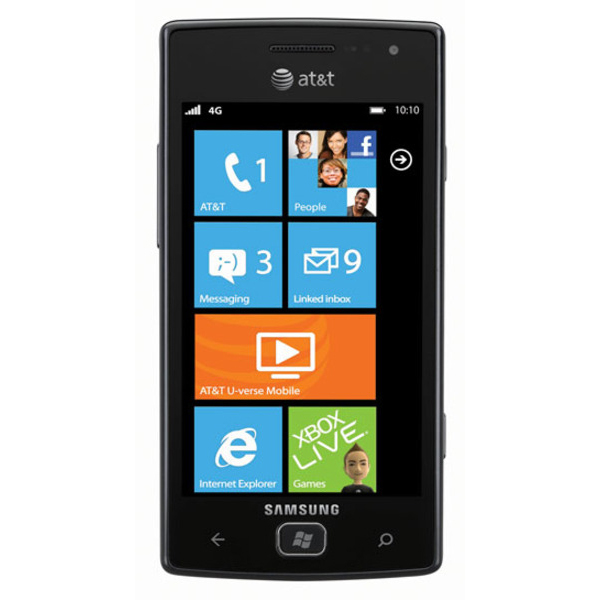 If you're looking to try out Windows Phone 7.5, the Focus Flash provides just as good an OS experience as any other device out there — it's rocking the same 1.4GHz processor with 512MB RAM as pretty much everyone else, and the 800 x 480px resolution on a 3.7-inch Super AMOLED display means the screen is bright and crisp. For this much, Samsung should be praised. No, the tradeoff Samsung made here to hit that $49.99 price point is what else makes up a phone — namely, a plastic-y chassis, so-so call quality, and a really bad camera.

In a sense, what you have with the Focus Flash is a platform that's form over function — style that hasn't quite hit the feature set as its competitors — combined with hardware that's function (price) over form. Those who find the size of Samsung's 4.3-inch Focus S too large should definitely consider this as a Windows Phone 7.5 alternative, but in doing so, consider taking that $150 in savings and buying yourself a nice point-and-shoot to accompany you.