The Droid RAZR is a legitimate feat of hardware engineering — but is it your next phone?

The Droid RAZR is one of those rare phones that qualifies as a leap forward in hardware design and engineering. Sure, other handsets have higher-resolution displays and faster processors, but only the Droid RAZR squeezes a full set of competitive state-of-the-art specs and an LTE radio into a body just .28-inches thick — a profile thinner than any other modern smartphone available. Even more remarkably, the RAZR has a bigger battery than the Droid Bionic inside its ultraslim case. In other words, it’s the best phone Motorola’s ever put together, at least on paper. How does it hold up in the real world — and is it worth getting now instead of waiting for the Samsung Galaxy Nexus, which was announced on the same day and features Android 4.0? Read on to find out.

Yes, the RAZR is thin. Unbelievably thin — just slightly over a quarter-inch thick. It’s hard to appreciate how thin that is without holding the RAZR in person; apart from the now-familiar Motorola camera bump at the top, most of the body is just as thin as an iPod touch, but there's a 4G LTE radio in there. That thinness is courtesy of the stainless steel frame and soft-touch Kevlar back, which also contribute to an impressively stiff and solid feel. There’s zero body flex here.

But while the RAZR might be thin, it’s not small — it’s rather huge, actually, with a ton of padding around its 4.3-inch display. In terms of surface area it’s actually closer to devices with 4.5-inch displays like the Samsung Infuse or Galaxy S II on T-Mobile and Sprint, and the thick bezel around the screen doesn’t make it easy to use one-handed. I have large hands and I found one-hand operation difficult; if you have small hands it’ll be basically impossible.

The front of the RAZR is notable for reasons other than its sheer expansiveness: there’s a notification LED, 1.3-megapixel front-facing camera, ambient light sensor and proximity sensor tucked in beneath the earpiece, and you’ll find the standard set of capacitive buttons at the bottom with the Verizon logo clumsily squeezed above them. The edges of the front glass are also slightly beveled, which makes the entire front surface appear to pop out slightly from the case even though it’s actually flush with the sides. It’s odd, actually — a bulbous feature on a phone that emphasizes thinness.

You’ll find MicroUSB, MicroHDMI, and the 3.5mm headphone jack along the top, but there’s no noise-cancellation mic as on the Droid X2. The left side is blank apart from a flip-down door for the 4G LTE SIM and microSD card slots, and the right side offers up the sleep / wake switch and minuscule volume rocker. Around back, the 8-megapixel camera, LED flash, and speakerphone are set into a gunmetal-colored plastic panel above that woven Kevlar back plate, and there’s a second microphone for video recording just below it. Inside, there’s a 1.2GHz TI OMAP 4430 processor and 1GB of RAM.

One thing you won’t find? A battery door — in another concession to thinness, the battery is sealed in. 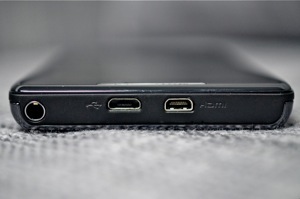 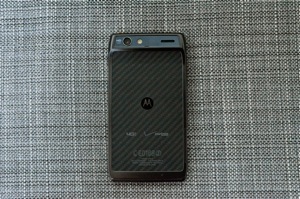 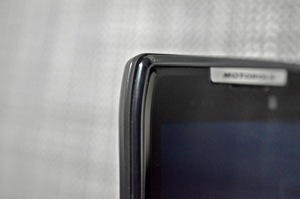 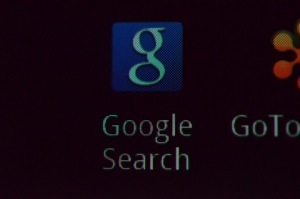 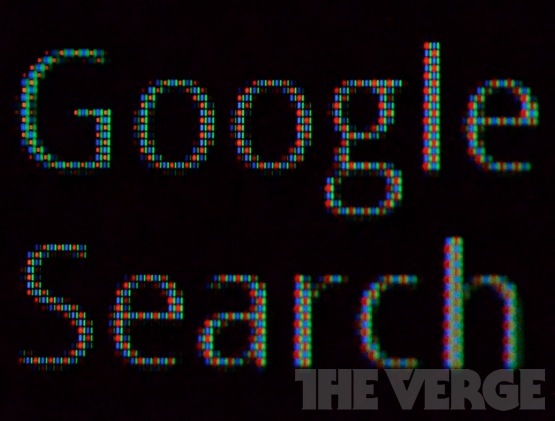 While the RAZR is the first device to ever ship with a 4.3-inch qHD 960 x 540 Super AMOLED display, it’s not quite the achievement Motorola made it out to be at launch. First, the Samsung Galaxy Nexus features a higher-resolution 720p HD Super AMOLED display, and second, the RAZR’s screen looks pretty bad. Super AMOLED panels use the inferior PenTile pixel arrangement, and the RAZR’s 256dpi pixel density doesn’t hide it — in fact, it seems to make it worse. Not only are individual pixels readily apparent, but text looks jaggy, there’s red fringing around vertical lines, and images seem to de-res when scrolling in the browser.

Compared to Motorola’s excellent qHD LCD displays in devices like the Bionic and Droid X2 and Apple’s industry-leading iPhone 4 / 4S Retina Display, the RAZR is a major disappointment — and that’s before even taking into account AMOLED’s inherent love-it-or-hate-it hypersaturation and consistent off-axis blue color shift.

(Update: I've taken a closer look at the RAZR's screen in our forums.)

Motorola’s dropped the "Motoblur" and "Blur" branding for the skin it puts on its high-end smartphones, but this nameless evil is still to be feared. I actually quite liked the skin Motorola used on the Droid X2, which did little apart from tightening up some visual elements of Android and adding clear buttons to individual notifications, but things have gotten substantially worse with every subsequent Motorola device. The current version of Moto’s skin is overwrought, fussy, and confusing in many places, and while there are some redeeming elements, nothing about it is clean or inviting — it’s almost like the OS is screaming at you. Just watch the extraneous random "glow" animation that accompanies each homescreen transition, or the super-slow zoom in effect when you open the app list. Both are cute the first time, and then quickly irritating.

Some of the extra pieces are particularly silly: the quick contacts widget doesn’t let you jump down your contact list by letter, so you have to scroll endlessly to add specific contacts, Motorola’s app icons are just slightly larger than Google’s, so they don’t look properly aligned, and the photo gallery app is a mish-mash of controls and menus. It all feels like Motorola just can’t seem to help itself when it comes to cramming things into its skin; a little restraint would go a long way.

That said, Motorola has added some interesting pieces to the RAZR.

Smart Actions are likely the single best feature of the RAZR. The system constantly monitors the phone’s state and location and automatically adjust settings and performs tasks as things change. The possibilities range from the simple, like launching the music player when headphones are plugged in, to the complex, like shutting down Bluetooth and GPS when you get home to preserve battery life.

The system itself is extremely simple: individual rules consist of triggers and actions. Any rule can have multiple triggers and multiple actions, although there’s not a lot of granularity; all of the trigger conditions have to be met to set off rules. You can’t say "turn off GPS if I’m at home or the battery level is below 30 percent," for example. Obviously you can get around that by creating multiple rules, but it would be nice to have a few more options. It would also be nice if the system was extensible so other apps could add in their actions.

Popular apps like Tasker and Locale offer similar functionality and a little more extensibility, but hey — Smart Actions are free. 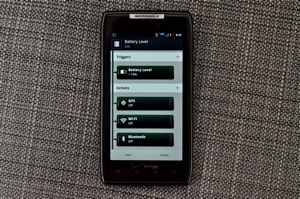 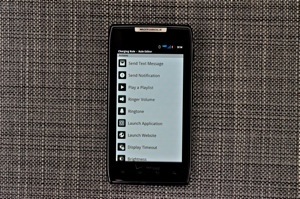 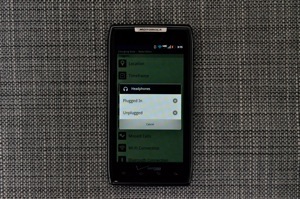 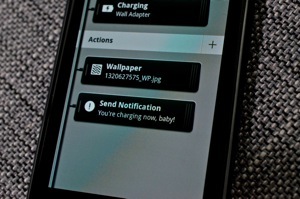 Once installed on your computer, the MotoCast application can also handle syncing content over USB from iTunes, which is extremely useful.

The RAZR can also run Motorola’s Webtop environment when plugged into the various docks. You probably don’t care. Webtop remains as marginally useful as ever — it’s not a reason to buy the phone, nor a reason to avoid it.

Lastly, we should note that all of these tweaks and extensions to Android mean that the RAZR won’t get Android 4.0 Ice Cream Sandwich until sometime next year. That’s hard to take, especially since we’re expecting Verizon will launch the Galaxy Nexus with 4.0 in the next few weeks. And even when the RAZR does get ICS, you’ll forever be stuck with those four capacitive buttons at the bottom of the screen as Google moves Android away from them entirely. Yes, ICS will work with them, but they're not at the cutting edge of the platform. It may or may not matter to you, but it’s definitely something to consider. 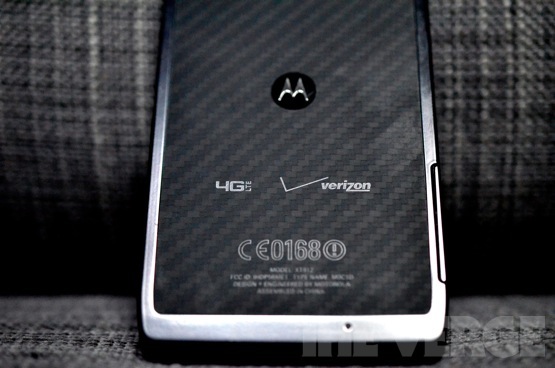 Motorola might pack on the unnecessary animations and bloat, but the RAZR’s overall performance is quite good: I got Quadrant scores of between 2400 and 2800, which is in range of other high-end Android devices like the HTC Amaze 4G and the Samsung Galaxy S II. I did notice a fair bit of occasional lag in the web browser, although it was inconsistent, and the SunSpider browser test returned a score of 3448.6, which is in line with other high-end devices.

Motorola only gave us but a single day to review the RAZR, so we'll have to see how the battery holds up over time, but in average use the RAZR’s battery held up as well as any other LTE device — I browsed the web, made a few phone calls, checked my mail, and otherwise used the phone like normal for most of the day before having to charge up. Unsurprisingly, the more I used LTE, the quicker the battery drained. The 1780mAh battery is a bit larger than the Droid Bionic’s and it offers slightly longer quoted talk times, but it’s also sealed in — you won’t be able to quickly swap it if you’re a serious road warrior. 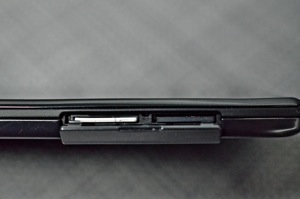 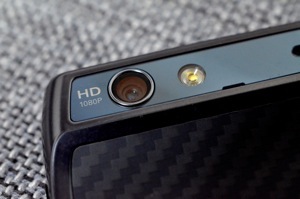 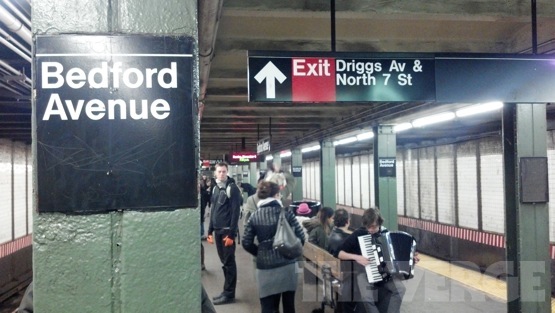 The 8-megapixel camera on the back of the RAZR is the same as the Droid Bionic. And just like the Bionic, the RAZR takes reasonably good photos when everything is perfectly in order, but the slow autofocus and relatively poor low-light performance doesn’t make that easy — especially not compared to the newer, faster cameras in phones like the iPhone 4S and HTC Amaze 4G. Similarly, the 1080p video is reasonably fine, but not spectacular, and it generates huge files — perhaps that’s why the RAZR comes preset to 720p out of the box.

There’s a 1.3-megapixel camera up front for video chatting, which works with the bundled Google Talk client. As with other front-facing cams, that’s really about all you’ll want to use it for.

The Droid RAZR appears to be just one step behind

So is the Droid RAZR worth Motorola’s marketing blitz? Is it the phone to get? Well, probably not. While the hardware engineering required to stuff the internals of the Bionic into the thinnest smartphone design on the market is nothing short of amazing, the compromise on display quality needed to get there simply isn’t worth it. The quality difference between the LCD 4.3-inch qHD panel on the Droid Bionic and the Super AMOLED panel on the RAZR is simply night and day — and while the Bionic isn’t as sexy as the RAZR, I prefer a screen that’s easy on the eyes to a Kevlar back panel. And the RAZR’s over-the-top Android skin makes a bad display look even worse.

“Something better is coming” is usually bad buying advice when it comes to Android phones, but in this case it’s true. The upcoming Samsung Galaxy Nexus is nearly as thin, offers a larger 4.65-inch display with higher 720p resolution, and will ship with stock Android 4.0 as a Google-blessed device that’s first to get software updates. I’m concerned that the Galaxy Nexus also has a PenTile Super AMOLED display, but all things being equal the RAZR appears to be just one step behind.