Cyberdyne's HAL — Hybrid Assistive Limb — robotic suit has been updated to help workers clean areas contaminated with radiation. The new design is meant to be worn under anti-radiation tungsten vests that weigh as much as 132-pounds (60-kg).

Tokyo-based Cyberdyne unveiled a new version of its Hybrid Assistive Limb (HAL) robotic suit today specifically designed to help workers operating in areas contaminated with radiation. The exoskeleton was unveiled in hopes of assisting its human jockeys with the cleanup at the Fukushima Daiichi nuclear plant — though no decision has been made yet in that regard. The battery-powered suit is designed to be worn under anti-radiation tungsten vests that weigh as much as 132-pounds (60-kg).

When Japan suffered a triplet of tragedies on March 11th it was a fleet of foreign-made robots that helped remotely monitor and assess the situation. Ironic given Japan's burgeoning robotics industry. 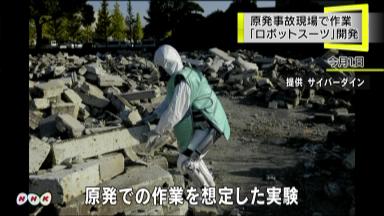