Lenovo's crafted a beautiful ultrabook, but does it have what it takes to knock the MacBook Air off its perch?

Months before Intel decided to jump-start its new ultrabook category, Lenovo made an extremely thin laptop which essentially fit 95 percent of Intel’s vision: the IdeaPad U260. The aluminum-wrapped laptop, which came out last December, was just 0.7 inches thick and was one of the best Windows ultraportables ever created in terms of performance and overall build. However, it couldn’t take on its closest competitor — the MacBook Air — for one major reason: battery life. An incredibly thin laptop cannot last under three hours on a charge and expect to be taken as a serious rival.

But every first draft deserves a rewrite, and the 13.3-inch, $1,199 IdeaPad U300s is just that. The latest ultrabook entrant has the now-familiar Intel-mandated attributes, including Core i5 / i7 processors, 256GB solid-state drives for fast boot and resume times, and long battery life. So has a year and some direction from Intel made the U300s the perfect laptop? Or does it — like the other two ultrabooks out there — have another set of issues entirely? Those answers and many many more await in the review below.

Boy, is it a nice change of pace to not open this paragraph — as I have the other ultrabook reviews — with a description of how the U300s looks like a MacBook Air with some slight tweaks. Not only has Lenovo taken a totally different design route than Apple (and subsequently Asus and Acer), but it’s created one of the most unique and beautiful machines in existence. As you can clearly see from the surrounding images, I was sent the "Clementine Orange" version, but it’s also available in gray. Whether or not you like the orange hue, the uniform aluminum sheet that wraps the laptop like a book cover gives it a particularly clean and understated elegance. And speaking of clean, Lenovo has painted the Windows and Intel branding onto the underside of the laptop – nope, no stickers mucking up the palm rest here.

Even better is that the brushed aluminum shell makes the system very rigid, at least when it’s closed. The metal outer sheet and palm rest are very tough, but where the two meet around the edges, there seems to be some issue. That’s not to say that part of the machine is poorly made — it isn’t — but I noticed the right edge of the palm rest making a clicking sound when I would press on it.

But, of course, the killer design is intertwined with a really thin chassis. Unlike the Air, the U300s is a uniform 0.58 inches thick, and while that may make it look chunkier than the Air and Zenbook, it still weighs just 2.9 pounds. The laptop is easy to carry with one hand and slides right into a shoulder bag, but the port selection does leave a bit to be desired. The clean black edges are home to USB 2.0 and USB 3.0 ports, a 3.5mm headphone jack, and an HDMI socket. Sadly, there’s no SD card slot and no included USB-to-Ethernet dongles like the Zenbook. The missing SD card slot is obviously the biggest blunder, and considering the U260 was knocked for the same issue, I’m not sure why Lenovo didn’t just throw the extra port on there. 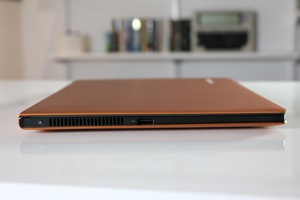 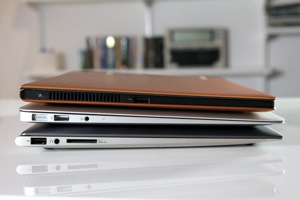 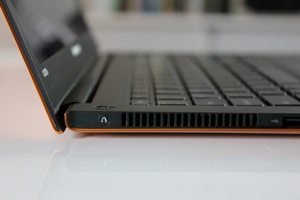 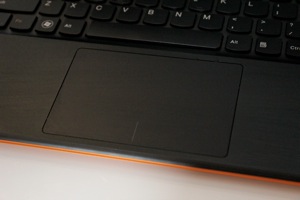 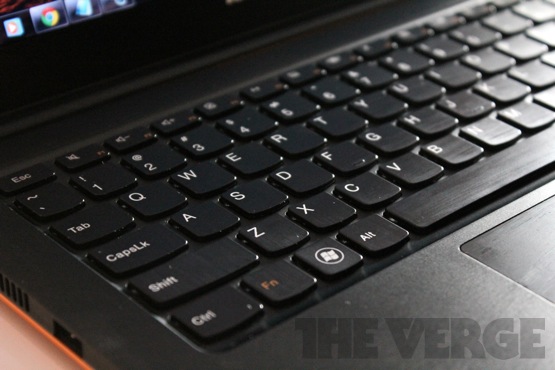 One of the biggest complaints I’ve had about all the extremely thin laptops out there, including the MacBook Air and the Sony VAIO Z, has been the shallow depth of the keys. (The thin dimensions of the deck doesn’t leave much room for key depression.) However, Lenovo’s taken its deep knowledge of keyboards and employed it on the U300s. The keys don’t mold or curve to a finger like the ones on the ThinkPad X1, but their rounded bottom edges (or what Lenovo calls the smile shape) require less movement when typing and they have a decent amount of height. That’s not to say the keyboard is perfect — the right Shift and Tab keys are shrunken and there’s no backlight — but it is the best ultrabook keyboard I’ve seen so far. And I’d even say it beats the ones on the Sony VAIO Z and MacBook Air in terms of ergonomics, although I slightly prefer those because of the backlighting.

Ah, the trackpad. Has Lenovo been able to get right what Asus and Acer have gotten so terribly wrong? The glass pad isn’t flawless, but it is better than the Zenbook UX31. Sadly, Lenovo removed the sandblasted glass layer that was on the U260, but the single button pad is smooth under a finger tip. As for functionality, it supports basic pointing and clicking and multitouch gestures are responsive, though not as smooth as those on the MacBook Air. Two-finger scrolling, for instance, works, but can be somewhat jittery. My biggest issue is that the pad is a bit too close to the keyboard, which resulted in my palms swiping at it at times and moving the cursor around on the screen. Angling my hands and turning off the touchpad using the F6 key helped to skirt those sporadic cursor jumps. 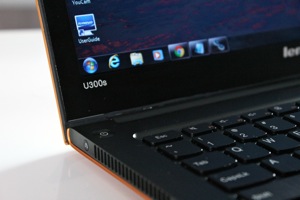 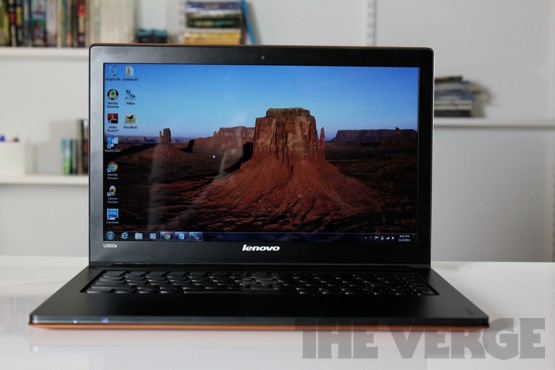 The U300s has a very standard 1366 x 768-resolution 13.3-inch display, which means it falls behind the 13-inch MacBook Air’s 1440 x 900-resolution display and the Zenbook UX31’s 1600 x 900-resolution screen. That’s a bit disappointing, but so is the quality of the panel that Lenovo went with. While it is sufficiently bright, blacks don’t look all that deep (at least not in comparison to the Air) and off-axis vertical viewing causes a decent amount of color distortion. It’s not a terrible panel, but it’s just not as high quality as the one on the Air. Also, Lenovo doesn’t offer its typical anti-glare, matte option so you’re stuck with a glossy screen that’s hard to read outdoors. If only Lenovo had gone with the matte IPS display that’s available on the ThinkPad X200. If only!

As soon as I started listening to the new Florence and The Machine album it became apparent that Lenovo didn’t put the same sort of time and energy into the speakers as Asus did on the Zenbook. While the sound is clear and actually rather steady, it doesn’t have the same fullness as the UX31’s speakers. The speakers were fine for listening to some tunes while writing this review, but I actually decided to utilize the Intel WiDi capability, which allows you to stream music and video to a HDTV via a WiDi box. Lenovo doesn't bundle the $99 box with the laptop, but I happened to have the Netgear box lying around my new apartment, and streaming Pandora to my 40-inch Toshiba HDTV worked without issue. It’s a convenient trick and not something the other ultrabooks have built in.

Like the Asus UX31 I just reviewed a few weeks ago, the U300s has a dual-core 1.8GHz Core i7-2677M processor and 4GB of RAM. (The entry level unit has a Core i5-2457M processor.) And like the others, it also has an SSD (a 256GB JMicron 616 to be specific) to achieve its 20-second boot and 15-second resume times. Additionally, all of those parts in conjunction create for a very speedy laptop; I never found myself waiting around for programs to open and simultaneously running my usual programs — Microsoft Word, Chrome with over 15 tabs, Trillian, TweetDeck, and GIMP — was no issue. You’ll see in the benchmark chart below that the laptop scored slightly higher than the Asus and Acer, but not quite as high as the MacBook Air. 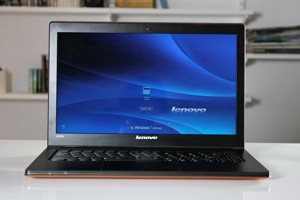 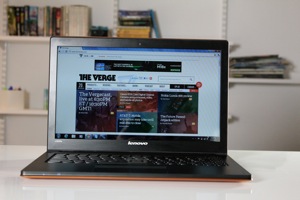 The graphics part of these reviews is starting to sound like a broken record. The Intel HD 3000 integrated graphics is fine for local and streaming HD video, but isn’t going to cut it when you want to fire up that new Batman: Arkham City. Still, it’s perfectly fine for basic multimedia playback and, as I mentioned above, streaming audio and video from the laptop to a TV with Intel’s WiDi was quite smooth. Also, thanks to the vents located in the hinge and the breathable keyboard, the laptop, including the palm rest and underside, stayed relatively cool during heavy Flash playback of the two-hour first-ever video Vergecast. 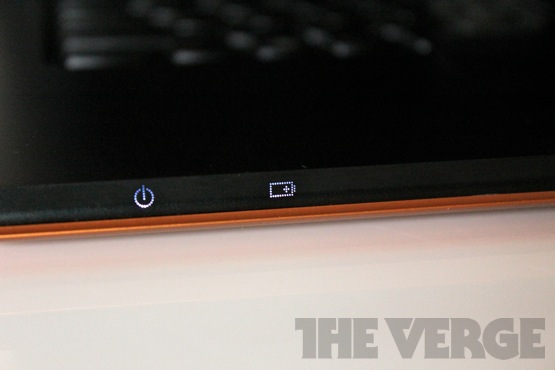 As I pointed out in the introduction, the precursor to the U300s — the U260 — suffered from terrible battery life. Two and a half hours was hardly enough juice for a very mobile laptop, but I’m happy to report that is no longer the case. The U300s’ four-cell battery lasted five hours and 33 minutes on The Verge Battery Test, which loops a series of websites and images at 65 percent brightness. In actual usage, I got closer to six hours of use. That’s in-line with the UX31, but about an hour shorter than the MacBook Air. Still, it’s extremely solid for a laptop this thin. Unfortunately, Lenovo hasn’t put as much thought into the power brick as Asus — it’s your typical two piece brick and cord setup — but the cool battery LED on the front lip of the laptop might make up for it.

Lenovo has actually kept the Windows 7 Home Premium install relatively clean, though it does have its TouchZone app, which aims to mimic OS X spaces or Android’s homescreens. When you vertically swipe four fingers across the pad it brings you to a colorful screen with a Post-it note-like image. You can write notes and then rip off the sheet by swiping up. It’s a neat idea, but I’m not sure it’s all that useful to have notes on a completely separate screen. Other than that, Lenovo has its typical proprietary applications, including OneKey recovery and its Energy Management.

Our review of Lenovo IdeaPad U300s 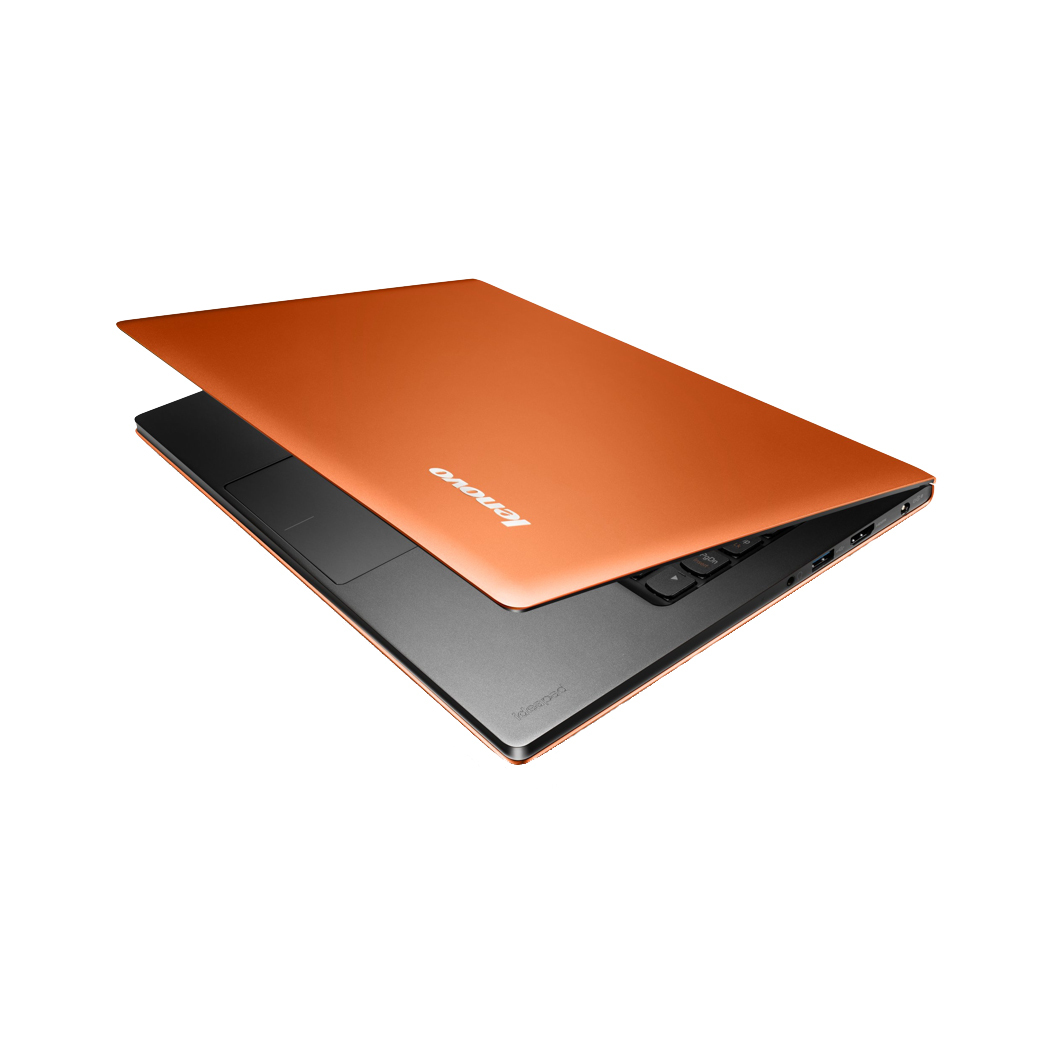 The U300s’ captivating design and battery life make it a great laptop, but Lenovo still hasn't caught up to Apple's MacBook Air

The Lenovo IdeaPad U300s isn’t only a worthy update to the U260, it is now the best ultrabook on the market. Thanks to a totally unique design, extremely solid build quality, a functioning trackpad, a comfortable keyboard, and six hours of battery life, the IdeaPad U300s doesn’t suffer from the pain points of the other ultrabooks out there.

But is it better than the MacBook Air — the laptop that has set the bar for the entire industry? At $1,195 (our Core i7 U300s rings up at $1,495), it is $200 less than the base 13-inch MacBook Air, however, saving that cash means living without a higher resolution display, an SD card slot, an extra hour of battery life, and a backlit keyboard. And that’s the sad fact about the U300s – it may be the best ultrabook, but Apple’s lead and ability to competitively price its premium products makes it incredibly hard for these other laptop manufacturers to catch up. The U300s’ captivating design and battery life make it a great laptop, but Lenovo still hasn't caught up to Apple's MacBook Air.