A number of LG products were unveiled at the CES Innovations Awards, including 3 flagship TV models and an unusual iPod speaker dock.

The 2012 CES Innovations Awards were just handed out, and that's brought a number of LG's upcoming products into the public eye, the most noteworthy of those being several new HDTV models. First up is the Cinema 3D TV 55LM9600, which carries LG's "Nano Full LED" technology, and an insanely small bezel — if the photos are to be believed, this TV is nearly all screen, similar to Samsung's UN-D8000 series. The other Cinema 3D TV, model number 55LM8600, also claims to have LG's narrowest bezel but doesn't feature the Nano Full LED technology. Lastly LG's offering a flagship 3D Smart TV for those who prefer plasma, the PM9700.

LG also unveiled an iPod speaker dock that brings some style to a category filled with dime-a-dozen models. The distinctive (and oddly named) Powerful Sound iPod Docking Speaker (modle number ND8520) probably measures a bit under a foot in each dimension and features AirPlay capabilities. There's little other information available on this device at this time — it hasn't yet been added to LG's website, and the details on the CES awards page are minimal. 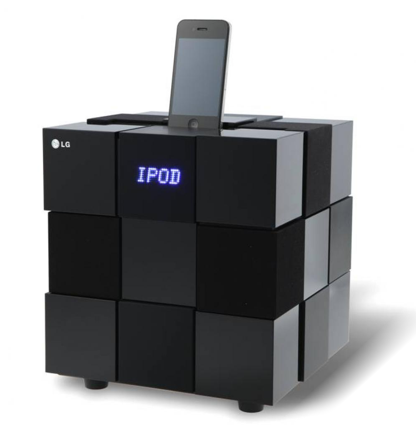