Spotify wins with Facebook Open Graph, other music services not so much

Share All sharing options for: Spotify wins with Facebook Open Graph, other music services not so much

Facebook has released early results of Open Graph integration on various social music apps, and although it reports good news for all music services, the truth is Spotify is crushing the competition. The European newcomer has 2.5 million daily active users (DAU), 250 times the runner-up Mog, and tops out at 7.4 million monthly active users (MAU). Rdio still only clocks in at 60,000 MAU, despite new user registrations from Facebook increasing 30 times since f8. When it comes to social networks, the number of users is just as important as the quality of service, and the dominant player garners a distinct advantage here even though it lacks desirable features, like a web interface. The green circle has it's drawbacks, but if the social aspect of music is important, there's really no other choice.

Update: If you want to argue that Facebook is driving folks to social music, there may be some truth to that. For instance, Spotify's daily active users are apparently up 1.33 million, with monthly active users up 3.98 million to 7.4 million since f8. Then again, as TechCrunch points out, Rdio has ultimately grown by a mere 200 users in the same amount of time. 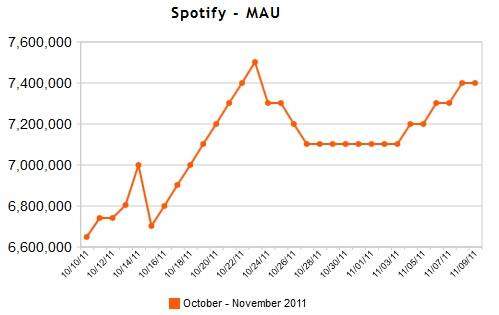 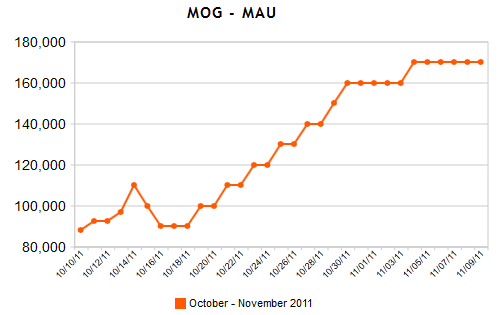