I was writing a brief response to the  very good "Death of a Lamppost" post, when I realized my thoughts were a bit bigger than a mere comment.

There is one theme that the post hints at a bit and other places on the internet lay on thick: The suggestion that the iPhone's success is largely due to marketing.  Apple's ads are better than any competitor's. I think that's something everyone can agree on, which is outlined excellently by Mr. mrdavis47. But that isn't enough to make people drop the kind of money on a product that costs as much as an iPhone. Advertising and marketing can create desire, but the best commercials can't automatically make someone go "I'm buying this tomorrow." 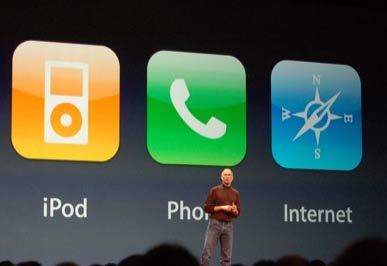 Hype, though, can sell phones. Whether it's an Apple keynote or the leakage of the latest and greatest Android super phone's specs or picture, hype is powerful. Hype can get a product into your mind. It can get a product into your hands. It can make you drop hundreds of dollars. But hype is a finite resource. When you get the product in your hands and use it for a week, the hype is gone. The product becomes normal to you. It becomes routine, like breakfast or your job.

So marketing only goes so far. Hype can get you to buy an expensive product, but it doesn't last. How has the popularity of iOS devices lasted so long? One word: The experience.

I'm sure you're asking why this is called "On Scrolling." To me, it's because scrolling is the central part of the experience on a mobile device.

And Android does it miserably.

I never really thought about this until the big Kindle Fire reveal. Here we had the newest Android tablet savior, the tablet that would finally do what the 10-12 other Android tablet saviors released in 2011 were supposed to do: be an iPad Killer. I was thoroughly impressed by the presentation by Jeff Bezos, and thought the price really did make it a game changer. That is, until I saw this hands on.

Watch the first 10 seconds here. The Amazon spokesman merely scrolls through a list, and it stutters going down and when it goes back up. This is a very high-end device. Dual core processor, lots of RAM, all sorts of crazy internals that would have cost $10,000 in 1998. And yet it can't scroll. This isn't exclusive to the Fire, as every Android device I've ever touched has had scrolling issues.

People buy things because of hype, marketing, and word of mouth. But nobody keeps a product because of those things. When the time comes to think about replacing a phone or a tablet, the commercials aren't the first things that come to your mind, if they do at all. The experience is what sustains the happiness in users when they use a product, and scrolling is the heart of it. If a device cannot perform a simple but crucial task like scrolling effortlessly, then it does not bode well for the rest of the experience.

I've owned an HTC Incredible since the day it launched. I was a hardcore Android fan, glowering at any mention of the iPhone or its success. They were mere sheeple, I thought. They had no idea what Android could do.

Then I started scrolling. 19 months later, I'm ready to try something else.