the DOJ's new campaign against piracy and counterfeiting ties IP crimes, to drug trafficking, job loss, child labor, and murder in the streets, and it's hilarious.

The Department of Justice and McGruff the Crime Dog launched a multimedia campaign against piracy and counterfeiting yesterday that ties these undesirable activities to drug trafficking, job loss, child labor, and murder — a bolder strategy than merely hiding search results. According to a government-approved survey, "the public believes that 'bargain' products — getting something they want at a cheaper price — are a normal part of life," and most people aren't aware of the impact IP crimes have on communities. Leading the charge against this "dire situation," the video below illustrates how buying a fake DVD from a well-set Russian mobster supports society's most pernicious ills.

The short film is basically a retelling of The Dead Zone if Johnny had chosen to take on intellectual property infringement instead of the far less pressing threat of nuclear war. Lest you think you can avoid any negative effects by sticking to the internet, the next video gives a heart-wrenching real-life example of how illegal downloading steals money directly from the bank accounts and guitar cases of starving artists. Is there no moral way to get the something-for-nothing we all deserve?

The videos above are intended to bring "the public’s proactive attention to these issues," says Attorney General Eric Holder, and "we can all be part of the solution" by reporting IP crimes to cybercrime.gov. Citizens can help the government to "prosecute the individuals, gangs, and international criminal organizations that profit from these activities." Holder also advised Americans to "exercise caution when looking for bargains and discounts on the internet." That great deal you find could leave somebody with no Christmas at all. 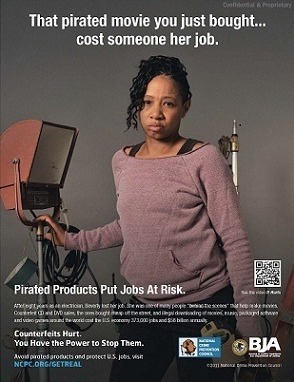 Of course, we don't know if this campaign will actually have any effect on piracy, or if the dangers are as dire as they're made out to be, but we're hoping for some more ads as memorable as the last big government advocacy program we can remember:

Adi Robertson contributed to this article.