A leaked version of BlackBerry OS 7.1 for the Torch 9810 includes mobile hotspot support.

Well, it's about time, RIM! A leaked version of BlackBerry OS 7.1 indicates that native mobile hotspot support is finally reaching the aging platform. The 3G sharing feature, which is a staple on most Android devices, looks like it will be integrated at the OS level. Or at least that seems to be the case according to an OSBB tipster, who has posted a leaked version of 7.1 for the Torch 9810.

This inclusion in its outgoing platform suggests that there's a good chance we'll see the feature included in the newly-renamed Blackberry 10 operating system when it's finally released. However, if you can't wait until then, or until 7.1 is released officially, the leaked software is available to install from the source link — just proceed with caution. Note that the installer is actually an unofficial, hacked-together version that updates the 7.0.0.540 ROM with the 7.1 features, so that caution you're proceeding with is doubly important. 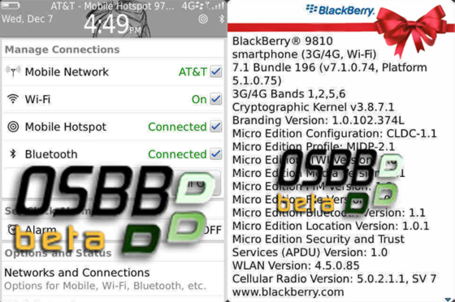