While a new study finds the Android Market app the most popular on Android across all age groups, Facebook dominates in the number two spot ahead of many of Google's other products. Market research firm Nielsen's new study of Android app usage breaks down the percentage of users that used an app during the month of September. Aside from Facebook, social apps are lightly represented here; no Twitter, LinkedIn, or Tumblr in sight. Otherwise, core functions like search, email, YouTube, weather, and maps — and Angry Birds — round out the top ten.

The lists are surprisingly consistent across age groups, with a core list of apps simply shuffling spots. Across the 18-24, 25,34, and 35-44 age groups, the study finds Google Search, Gmail, and Google Maps shuffling behind Facebook, and YouTube, Angry Birds, and Pandora radio fight for spots six through eight. It's notable that the top six apps in each age group boast usage over 50%, with a steep drop-off of at least 15% separating the rest of the list. 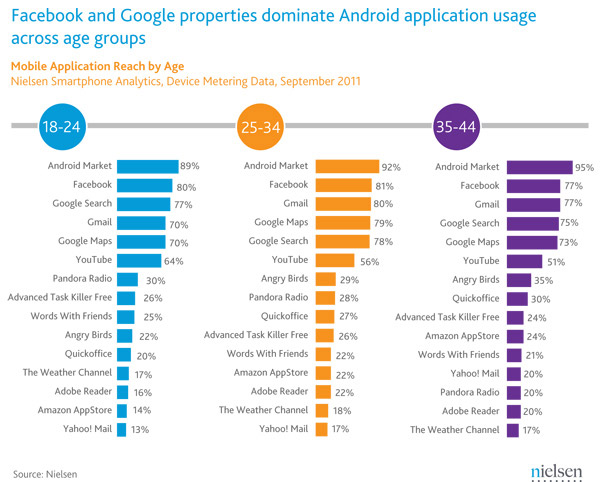