Nest thermostats are pretty difficult to get right now — Nest Labs' own website will only take down your email address to let you know when you can buy one, and Best Buy isn't selling any more online until 2012. That said, I learned over the weekend that there are apparently three Best Buy locations around the country that are currently stocking them, and I just happen to live a couple miles away from the Chicago location... so naturally, I ran down and picked one up. 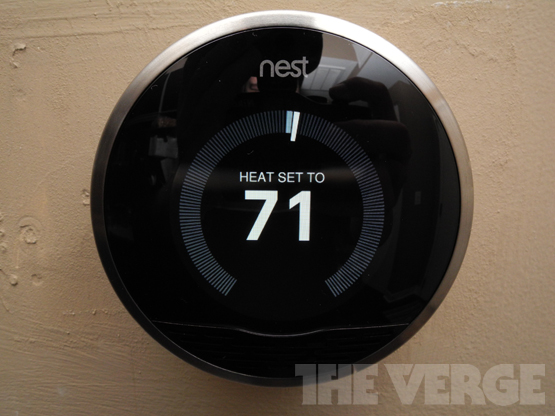 I should preface this by saying that I have a little experience with thermostats. When I bought my place a couple years ago, my first order of business was to retrofit the entire unit with Z-Wave-compatible lights, switches, sockets, and climate control, so I'd previously been using a Trane ComfortLink. It had been a pain in the ass to install, so I figured that upgrading to the Nest would be a snap by comparison. I ended up running into a few hiccups along the way, none of which were Nest's fault.

Taking it out of the box, I was really amazed and delighted by how well everything was packaged — and everything that Nest includes. Of course, no other company has really thought of a thermostat as a consumer electronics device before, and therefore hasn't really thought to package it with as much thought and care as you would, say, a smartphone... but it was really kind of more fun tearing this apart than I expected it to be. More to the point, Nest includes absolutely everything that the average person dealing with an average installation (more on that shortly) would need to get the Nest up and running. You get two drywall taps, two different types of paintable backplates if you have an area of torn-up drywall that you want to cover, an adapter to mount Nest to an electrical box, a really nice mini screwdriver with several bits that you'll want to keep, and various screws. The thermostat itself is — like many thermostats — divided into two parts: the base, where the connections to your system are made, and the top part (which is the part you actually see when it's installed). There's a short, visual, step-by-step installation guide that folds out. If you're quick and you don't have a weird setup, you could probably have it done in ten minutes.

But anyway, I have kind of a weird setup. See, the ComfortLink doesn't use batteries and requires a 24V common line for continuous power, which as far as I can tell is pretty rare. It's actually pretty crazy to me that most modern homes don't have a "real" power source going out to thermostat connections, so that was a learning experience for me. A company called Venstar sells a magical device called an Add-A-Wire which gives you a common line in addition to a standard four-wire configuration, for a total of five wires... I don't really understand how it works, but you need to get into your furnace, wire it in, and then on the thermostat side you splice in a diode that splits one of your existing wires into two. It worked pretty well with the ComfortLink, although it would sometimes reboot when the furnace attempted to ignite the gas — I long suspected that the ignition process caused a spike in the line that was just enough to cause the thermostat's processor to glitch out, but there wasn't much I could do about it, especially since I was already using a shaky, black magic hack.

I yanked the ComfortLink off the wall and used Nest's included labels to identify each of the five wires — Rh, W, G, Y, and C. It turns out that there's some sort of big metal thing inside my wall where the thermostat is mounted, so the included plastic drywall taps just immediately shredded when I tried to insert them... I ended up having to run down to Home Depot to buy a small drill bit then screw through the metal. I suspect it's a stud of some sort, but I'm not sure. The Nest's base — the first thing you mount on the wall — is extremely cool: not only is it far more organized and user-friendly than your typical thermostate baseplate, but it has a built-in bubble level so you can make sure that you're mounting it perfectly square (if you don't, the Nest's display and logo will be crooked). You don't need a screwdriver to affix the wires to the Nest's base — the clamps are all hand-operated. Just press, slide the wire in the hole, and let go. You match the wire labels that you applied before to the labels on the base, that's it. Couldn't be much easier.

I reset the breaker on my furnace and the Nest came to life. Success! Or so I thought. The first thing you do is connect the device to your Wi-Fi network, then it spends maybe 5-10 minutes updating its firmware and rebooting. After that, you go through the initial setup process where it identifies the type of HVAC system you have based on which wires you've connected. The Nest couldn't "see" the two hacked-on wires that were a part of the Add-A-Wire system! I was panicking. I pulled the Nest off, stripped more plastic off those two wires, inserted them again, and restarted setup... this time, it saw one, but not both. It wasn't looking good.

I consulted Nest's online support and learned that it supports four-wire systems without a 24V common. This was very strange to me because the Nest is obviously a higher-function device than my old ComfortLink, but what I didn't realize is that there's a rechargeable battery inside the Nest that sucks tiny amounts of power off the four-wire system to keep it charged continuously. Brilliant — and very good news for the majority of Americans who are living in homes with four-wire systems. 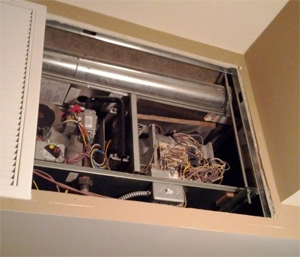 Unfortunately, that meant I needed to tear apart my furnace and my wall to remove the Add-A-Wire, which took another couple hours... but once I did and I rewired and reconnected the Nest, it worked perfectly. And to the Nest's credit, it was as verbose and graphical about what was wrong at all times — it let you know exactly which wires couldn't be detected, and showed a full-color depiction of the connections on the base so you could see which it was referring to. Very well done.

So I've had the Nest in use for a little less than a day now, and it's awesome. I don't know that it's the revolution that some have made it out to be, but it's the perfect modern update to an ancient part of the home that everyone has — it just looks good on the wall. It's not glaringly high-tech in appearance, it's not big, it's just "nice." What impressed me was the online account registration process, which lets you monitor and change your settings from a browser: when I went to sign up, Nest's site detected that I was near a unit and automatically identified it and added it to the account (once I verified it from the thermostat's display).

I'll add some more observations once it's had a chance to "learn" over the next few days.