As you may know, I posted my first Galaxy Nexus review back on November 17th, when I was able to get my hands on the international, HSPA+ version of the phone. Verizon has finally released its 4G LTE version into American waters, and I've spent some time testing the variant.

Overall, there are very few differences between the two models, and as such, much of my review of the GSM version still applies. For this review, I'm only going to be focusing on the notable changes, which center around data rates, call quality and stability, battery life, and slight hardware and software differences.

Even though the changes aren't all that noticeable, I still wanted to look under and around the hood of Google's latest flagship phone in its first real release on US soil, so read on for my take on the Galaxy Nexus for Verizon!

Take a look at our original, in-depth review of the Galaxy Nexus right here 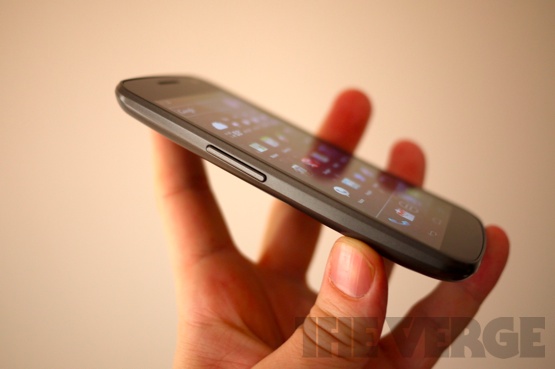 Physically, the Verizon Galaxy Nexus is nearly identical to the GSM version, save for some very slight alterations.

For starters, the phone is a bit thicker than its international counterpart (0.37 inches versus the HSPA+ model's 0.35 inches), and just a tiny bit heavier (0.33 pounds versus 0.3). Having used both versions, I can honestly say that the change isn't really that noticeable. The Galaxy Nexus looks and feels like the sleekest LTE device on the network yet. It's not as thin as the Droid RAZR, but it's more comfortable to hold, and seems more thoughtfully designed.

There was some speculation before the devices were available that the Verizon model would be a different or darker color than the GSM version, but I'm happy to report that both phones are nearly identical to my eyes.

Other small tweaks worth mentioning are that the volume and power buttons have a slight bit more snap to them than the pre-production model I tested last month. And like the GSM version, there's no microSD slot present here (though you do get 32GB of onboard storage, versus the HSPA+ unit's 16GB). Otherwise, all of the internal components line up (save for those cell radios).

Otherwise, the LTE Galaxy Nexus is the same phone as the one I reviewed a month ago (from a hardware standpoint). It's not as well made or well-designed as the iPhone 4S, and certainly doesn't use the same quality of materials, but it's still a solid, handsome phone. There are phonemakers like Nokia that are able to pull off world-class industrial design like Apple — I hope Samsung figures out how to do the same at some point. 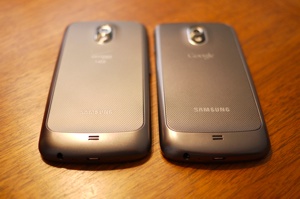 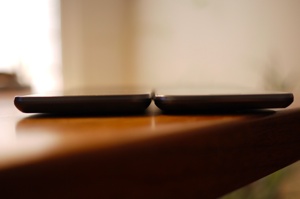 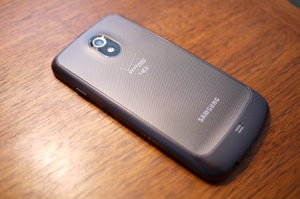 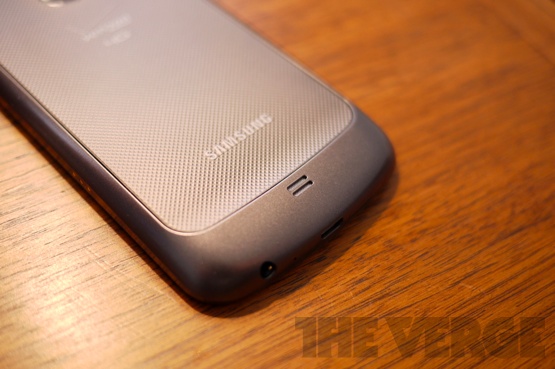 As with all LTE handsets, you can expect a dip in battery life which is not insignificant. I'd been getting anywhere between 15 and 18 hours on a single charge on my GSM version of the phone, but the Verizon model doesn't match those spans. Let's be honest — you knew walking into a Verizon 4G handset that there were going to be tradeoffs, and the battery is the primary target.

In typical, moderate daily use with 4G switched on (that includes a few phone calls, some gaming, lots of Twitter and email activity, and general web browsing), I'm seeing about 12 hours on a single charge before I need to plug in. That's not really thrilling news if you're going to be away from a wall socket for any significant period of time, but it's also not too shabby compared with other LTE phones on Verizon. On heavier days, you can expect to see that number dip even lower, however.

Even though the battery life takes a clear hit, I don't think it's necessarily a dealbreaker on this phone. Obviously it can't hold a candle to non-4G devices, but a swappable battery (or extended options) and an option to switch off 4G can help ease the pain. Still, don't expect the same performance you see on your 3G handset here. It simply won't happen. 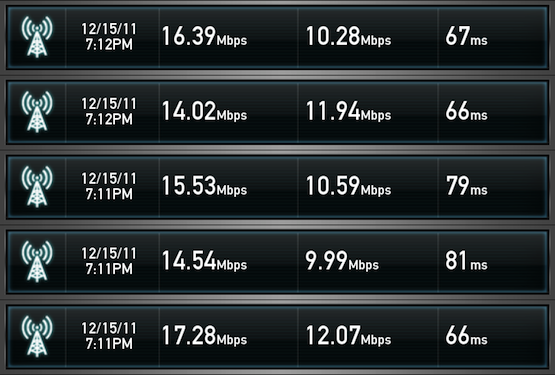 Data, on the other hand, was fantastic on the Verizon version of the Galaxy Nexus. As usual, LTE speeds far exceed what I saw on the GSM version in the same area. My tests topped out at around 16Mbps downstream and 12Mbps up (at its highest point), while even when I was getting a single bar of 4G I saw around 3Mbps down. That's really impressive.

As with most Verizon phones, voice call quality and reception has been excellent, and I didn't see any major issues with dropped calls or interference. I actually think the sound quality might be slightly better on the Verizon version versus the GSM model, but I would mostly chock that up to network differences as opposed to any changes in hardware. Some reviewers (particularly Sascha Segan at PC Mag) apparently had issues with connectivity and sound quality, but multiple people in The Verge New York office have the LTE device, and no one has experienced the same problems. 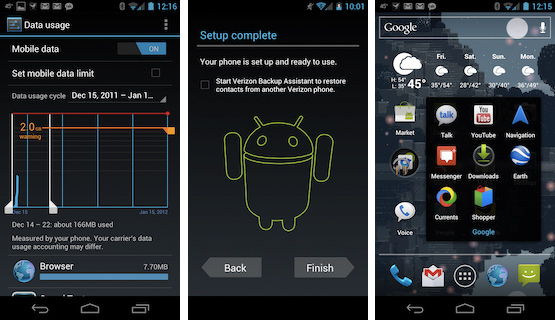 There's been some fuss about the software included (or not included) with the Verizon version of this phone.

In addition to the standard Google components, Verizon has saddled its Galaxy Nexus with a small set of carrier branded apps. Namely, the Verizon Backup Assistant, and My Verizon Mobile. I'm happy to report that the few pieces of software the company includes can be disabled in the app settings on the phone, after which you will never see them again. As far as I can tell, the function works like a kill switch for those apps — the only annoying piece of the puzzle might be the fact that they still live in some part of the phone's storage.

Since I've had some decent time to test ICS on the GSM version, I can tell you that one small issue I've seen pop up is that a handful of older apps exhibit some strange behavior in the OS. For instance, a menu is missing from one view of TweetDeck, and in other apps, because they haven't been plugged into the new text selection / copy and paste API, there are still issues with grabbing text. Clearly having more of these phones in the market (and more phones on ICS) will alleviate those problems.

Otherwise, even though there's been a slight update on the Verizon unit (4.0.2 versus 4.0.1), I can see no significant differences in the software on this phone. ICS is still just as excellent, and all of the pros and cons of the the new OS are present here. Of course, I went quite in-depth on this in our first Galaxy Nexus review.

One other minor note: as previously written about, Google Wallet will not be present in this phone at launch, even though it has NFC capabilities. I don't really buy Verizon's reasoning for the holdup, but it's worth saying that the GSM version didn't come equipped with the software either. I don't know how much of a problem that is for most users — I certainly haven't been pining for the service. Still, it would be nice to have full access to Google's suite of software and services, given that this is supposed to be the company's flagship phone. 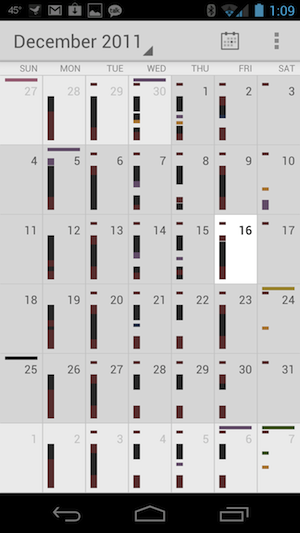 Note: This video review is taken from the GSM Galaxy Nexus review, though the focus is on the software

The Galaxy Nexus exceeds my expectations as a smartphone

As I said when I reviewed the GSM version of the Galaxy Nexus — this is one of the best smartphones ever made. The addition of Verizon's killer 4G service makes it almost undeniably awesome, though those improved data speeds obviously come with a price. Namely, battery life. There are also other knocks, like the fact that the camera produces uneven results, and the size of the phone won't be to everyone's liking.
Still, the combination of solid hardware, the fantastic new Ice Cream Sandwich software, and the speed and stability of Verizon's 4G service is intoxicating. For those of you who've been waiting for a true, pure Google phone on Big Red, this will be a dream come true. For users who have been thinking about the other LTE offerings on the network, such as the Droid RAZR or Bionic, there really is no comparison. You get the same fantastic network without any of the software tradeoffs.
At the end of the day, when you're spending $300 on a phone (and far more in monthly fees over two years), you need to love the device you get, and it needs to get the job done for you. The Galaxy Nexus exceeded (and continues to exceed) my expectations as a smartphone. It's an extremely capable and surprisingly fun piece of gadgetry to have in your pocket, and as a first-rung Google phone, it will likely reap the benefits of the company's innovations long before other handsets do. Ultimately, you have to make the decision of what you want out of a phone, and there are excellent choices on the market right now. Personally? Verizon just got themselves a new customer.
Compare the Galaxy Nexus to its GSM counterpart, the iPhone 4S, Droid RAZR, and Lumia 800 here
Read our original, in-depth review of the Galaxy Nexus right here