Is this smartphone-controlled ball the next hot toy?

Your smartphone’s not just a phone anymore — it’s a remote control for your TV, your stereo, an AR.Drone helicopter, and much more. So why not a plastic ball? I can only assume that’s what Orbotix thought when it developed Sphero, a baseball-sized ball that you drive around using your iOS or Android device. It sounds incredibly odd and more like a dream toy for pets, but thanks to some high-tech hardware inside – Bluetooth, an LED light, compass, gyroscope, and accelerometer – it has the potential to be much more, and even to amuse us humans. It’s mostly just a motoroized baseball, designed to roll around and light up, but its interaction with your smartphone opens up a bunch of different possible uses. Given its technology and its $129.99 price tag, I expected the Sphero to wow me. Is this an awesomely high-tech toy, or just a pointless novelty? Read on to find out. 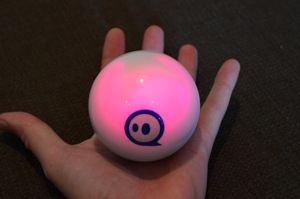 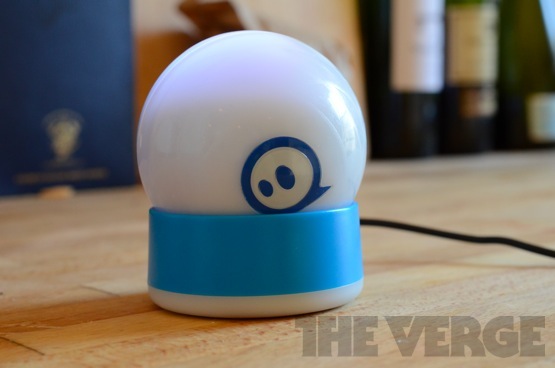 The Sphero looks like a mutant hybrid of a baseball and a plastic Easter egg you hide candy inside. It’s a translucent white color, with the blue Sphero logo on it, and while it looks like you could open up its halves you’re definitely not supposed to. The only real thing separating this ball from one you might find at a toy store is the moving part inside, which looks like either a fish or a bat, depending on which Verge staffer you ask. That’s the piece that contains all the ball’s various hardware, which is constantly moving around inside the ball to keep it oriented properly. It makes Sphero feel oddly alive, as if something’s going to come bursting out of it at any moment.

All the internals parts make the 5.9-ounce ball a little heavy, and oddly fragile — you’re not supposed to drop it from more than six inches, or kick or throw the ball. I did all of those things unintentionally or otherwise, and the Sphero survived the beating just fine. You shake the ball twice to turn it on, and the LED starts to glow a bunch of different colors; it rotates through several different ones, or you can control it manually with your phone. It has thousands of possible colors, and cycles through a lot of them when you drop it into the inductive charging cradle. Basically, it’s perfect for lighting up a dark room, or you know, a rave. 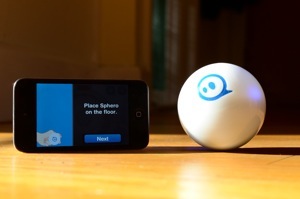 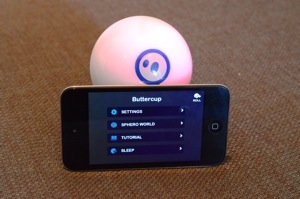 It’s only when you pair this odd ball with a cell phone that it shows its true colors. The Sphero connects via Bluetooth to iOS devices running iOS 4.0 or later and Android devices on 2.2 or later. Unfortunately, the Android app wasn’t yet available, so I have been testing using both an iPod touch and iPhone. The Sphero paired quickly and easily, and then re-connected immediately every subsequent time I turned it on.

You have to calibrate the Sphero every time you turn it on. It’s a simple process — pinch your fingers on the screen and spin them until a blue dot on the Sphero is facing you — and a critical one, because if the Sphero gets turned around and forward becomes right, it becomes really hard to use. You can re-calibrate the ball at any time, and I found myself doing it a lot. Anytime the ball hit a wall, or tried to go over a rug it couldn’t surmount, it seemed to get directionally confused. The ball is definitely better-suited for wider, open spaces, but it’s more fun when there are obstacles around, so re-calibration is pretty much a necessity.

The ball rolls around at one of three speed settings, the fastest of which has the ball rolling three feet per second. There's also a boost mode to give you a momentary burst, so you can get the ball off the carpet or over a stray cable — it gets stuck pretty easily, and the boost mode helps, but I moved a lot of cables out of its way when playing with it. The Bluetooth connection works up to about 50 feet, which I like; what I don’t like is that the ball turns off after only about five minutes of non-use. If I got an email while the Sphero was on, by the time I'd read and responded to it the ball had gone to sleep. That’s a battery-saving move, I’m sure, but it means you spend a lot of time picking the ball up and shaking it back on and re-calibrating. It doesn’t even seem to help battery life much, either. If you use it constantly, it dies in an hour, occasionally a few minutes longer if you’re not moving it around too much. It then needs three hours in its inductive cradle to charge fully again.

The Sphero has fairly basic functionality, but there’s a surprising number of fun, goofy things you can do with a device that rolls around and changes colors. At launch, there are five different free Sphero apps, each of which does slightly different things with the gadget. The company is releasing an SDK for developers to build other apps, but here’s a taste of what’s out there now.

This self-titled app is basically a catch-all for using the Sphero. You can move the ball around using an on-screen joystick or using a cool drawing feature that lets you map out the ball’s entire path and then watch it follow your route. You can change the ball’s color and speed, and do a couple of wacky things like ask the ball yes-or-no questions and have it blink different colors for different answers.

This is the app you also use to connect to Sphero World, a web app that lets you track how much you play with the Sphero, how far the ball travels, and various achievements — like your best golf score. You can also join a Sphero Swarm and track your progress against other people; it’s like the most bare-bones version of Xbox Live you can think of.

You can also name your Sphero — mine came to me named "Buttercup," but you can call it whatever you want. A company rep promises that there’s a lot more to come from Sphero World to make it more of a full online platform, an idea that reminds me a bit of the Nike+ website.

The Sphero ball promises plenty of YouTube-able moments with pets or small children, and the SpheroCam app overlays Sphero controls on top of a basic camera interface, so you can control the ball and and take pictures or video of it at the same time. Whatever you capture gets dropped into the Photos or Gallery app on your phone, and you can share stuff from there. Sadly, there’s no camera on the ball, which would be even better, but at least it’s a way to capture how much a colored ball can confuse your dog.

This is the app for the serious Sphero owner. It gives you three different ways to control the ball — the same joystick as in the basic Sphero app, plus RC car-style up-down and left-right controls, and an accelerometer-based control. I’d say I spent 80 percent of my time using SpheroDrive since most of the fun of it is just driving it around (and occasionally terrifying my family’s pets). It takes some time to get good at maneuvering the thing, but once you get the hang of it, it’s a good time. 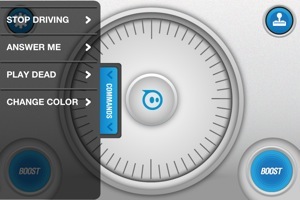 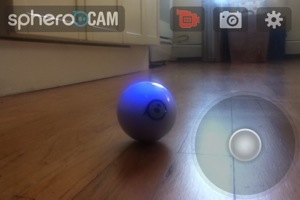 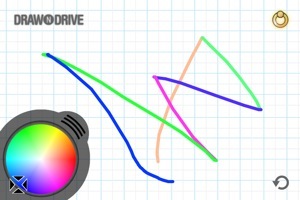 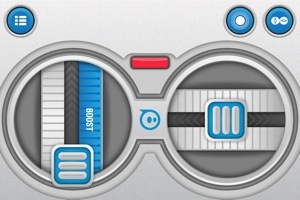 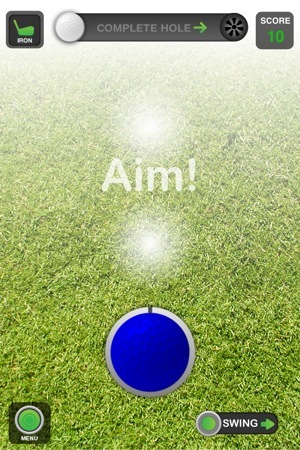 The draw-to-drive feature is impressive, though not quite useful. You can draw basic paths for the ball to follow in the regular Sphero app, but Draw&Drive brings some added control: you can make the ball go slightly left, then turn pink and go right, then go green and backward. It remembers surprisingly long and complex paths, and follows them closely, if imperfectly — if I had it go around and then come back to where it started, it always came close, but usually missed the exact mark.

If you’ve got a white ball rolling around, why not make a golf game, right? Essentially the idea is that you set up your own golf course wherever you are, using cups or bowls or room corners as holes, and then use the app to try and get the ball in the hole. You can use a driver, iron or putter, and you track your score as you go. It’s an interesting idea, but the implementation falls short; you can’t really use any kind of touch, and the ball’s not quite accurate enough to make the game fun and challenging (you end up using entire walls as holes, because you can at least hit those).

The Sphero’s a weird device, to say the least. As a pet toy, it’s so high-tech that it’s almost ridiculous. As a kids’ toy, it’s a little complicated to use and figure out. For adults, it’s a cool novelty, and is actually more fun than I thought it might be, especially as a race car — setting up obstacles and racing the Sphero was a good time. But that fun lasted maybe an hour, before the Sphero got mostly forgotten in its rather-cool charger. And my hunch is that others will have the same experience. Sphero’s developers are releasing an SDK for the device, which could change that — there are a lot of fun things this device could do with augmented reality. However, it needs a much broader swath of uses before I can recommend spending $129.99 on it.

Though honestly, can you really put a price on messing with your cat without even getting off the couch?