Acer Iconia Tab A200 will combine Tegra 2 and Honeycomb at launch, upgrade to Android 4 in January

Acer's Iconia Tab A200 has been fully detailed in terms of specs and Android upgrade plans, but the release date continues to elude us.

Share All sharing options for: Acer Iconia Tab A200 will combine Tegra 2 and Honeycomb at launch, upgrade to Android 4 in January

The Iconia Tab A200 that we saw plenty of in a teaser video recently has now seen its full spec sheet revealed. The guys over at Netbook News have been first to obtain the slate's official announcement, which includes a promise to ship the A200 with Ice Cream Sandwich in January and to provide a free upgrade to anyone who buys it with Honeycomb today. Shipments have apparently already begun in some countries, where buyers will be greeted by the familiar Tegra 2 dual-core chip, a 2-megapixel front-facing camera (no imaging equipment on the back), a choice of rear plate colors, a full-size USB port, and the Acer Ring app launcher. Aside from that, you'll get 1GB of RAM, a 3,260mAh battery, 8GB or 16GB of internal storage with microSD expandability, and the standard-issue 1280 x 800 screen resolution.

To see how the Iconia Tab A200 stacks up against other 10-inch Honeycomb tablets, hit up our comparison engine and have a browse. 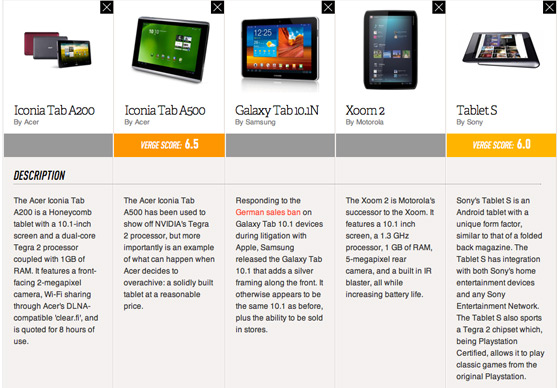 Android 4.0 Ice Cream Sandwich updates: everything you need to know