Gingerbread is on over half of all Android phones

The latest bi-monthly report given to Android developers on the state of Android fragmentation shows that over fifty percent of Android phones are running Gingerbread (Android 2.3 or greater).

Share All sharing options for: Gingerbread is on over half of all Android phones

Good news! Just over half of all Android phones accessing Market are running Gingerbread, according to the latest bi-monthly report given to Android developers on the state of Android fragmentation. The number comes in at 50.1 percent for 2.3.3 to 2.3.7, and a total of 50.6 percent for all Gingerbread (>2.3) devices. That number is impressive considering only 10 percent or so of Android phones were running 2.3 or greater six months ago. It looks like the Android fragmentation situation is in much better shape than it once was, and hopefully it means that 18 month update promise is being taken to heart. Unfortunately, the news comes just as Gingerbread is unseated as the latest and greatest by Ice Cream Sandwich, which doesn't even make a blip yet. 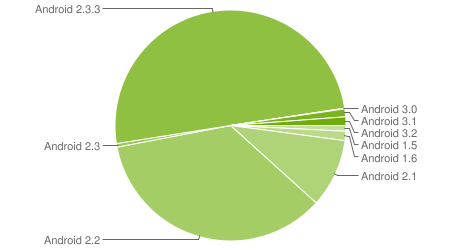