Users of Twitter are becoming less happy over time, according to a study by researchers from the University of Vermont.

By JamieKeene Dec 21, 2011, 9:17am EST
Via PsychCentral | Source University of Vermont and PLoS

Users of Twitter are becoming less happy over time, according to a study published in science journal PLoS by researchers from the University of Vermont. By tracking a huge number of key words, ranging from everyday, neutral words like "the" to more emotive words like "pancakes" or "suicide", the team have been able to glean an idea of the gross domestic happiness amongst users of the microblogging service. The happiness value of these keywords were rated by crowdsourcing through Amazon's Mechanical Turk, which provides easy access to manpower. Participants rated the words between one and ten on their sense of happiness, with their scores then averaged by the research team to create happiness values — examples given include "laughter" at 8.50, "food" at 7.44, "greed" at 3.06, and "terrorist" at 1.30. 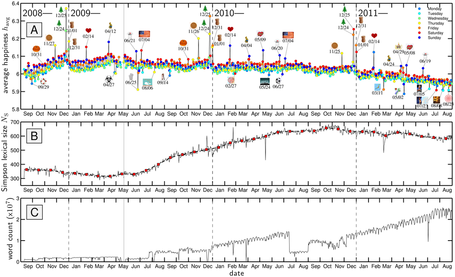 This analysis was projected across 46 billion words over the last three years from Twitter's 63 million global users. By plotting the averages from this enormous dataset, the team concludes that people have been becoming progressively unhappier over time. The research shows upsurges in happiness at predictable points — the holiday season sees a spike each year — and low points on the death of Michael Jackson (25th June 2009) and the Fukushima Nuclear Disaster (23rd July 2011). However, the team hasn't drawn a specific conclusion on the overall downwards trend. It's worth noting that words with multiple connotations might not get given the weight that they deserve — is "truck" always a positive thing? Also, does your Twitter persona accurately reflect how you feel?