AMD today launches the Radeon HD 7970, its first graphics card built at a 28nm production process and the first member of its Southern Islands family of GPUs.

AMD today launches the Radeon HD 7970, its first graphics card built at a 28nm production process and the first member of its Southern Islands family of GPUs. As its name suggests, the HD 7970 is the replacement for AMD's fastest single-GPU graphics card to date, the HD 6970. The new card increases transistor count from 2.6b to 4.3b, cranks the engine clock speed up from 880MHz to 925MHz, and adds 33 percent more Stream processors, jumping from 1,536 to 2,048. VRAM is also up from 2GB to 3GB — with a 384-bit memory interface for a bandwidth of 264GBps — but the most important change is in internal architecture, with the new Graphics Core Next setup promising to untap the card's potential to perform more computational tasks (i.e. GPGPU) without sacrificing any of its gaming prowess.

Other novelties with the HD 7970 include PCI Express 3.0 and DirectX 11.1 compatibility, making it the first card compatible with either of the two new standards. AMD is also introducing a new ZeroCore Power Technology, which is part of a number of cool things done on the power management side. The HD 7970 is the first AMD GPU to actually know how much power it's drawing from the system, and it's intelligent enough to "gracefully downclock the engine to ensure it's within power limits," as AMD's Zvika Greenstein explained to us. That allows the company to set the aggressive 925MHz default speed and to also promise some amazing overclocking potential from its new card. More from Zvika:

"I really encourage you to overclock this card ... The clock speed that you will hit will be well above 1GHz."

Basically, most retail graphics cards are designed to endure maximum loads for long periods of time, but only synthetic benchmarks are able to put them through such a gruelling test. Games require full power a lot less frequently, which is why a clock speed that you might not be able to support while running something like Furmark might make sense in aid of higher frames in a game like Battlefield 3. With AMD's new dynamic power management technology, setting that higher clock speed without fear of reprisal from the karma police looks to be a possibility.

Returning to the ZeroCore Power feature, it's a new idling mode that cranks everything down on the card to reduce its idle power consumption to 15W when displaying anything on screen or less than 3W with a black screen. This is particularly relevant to people with CrossFire setups, where the slave video card will consume just 2.6W (with its fan off) when not in use. Maximum power consumption for this new card is rated at 250W, same as with the HD 6970.

The stock heatsink on the HD 7970 is described as the sixth generation of AMD's vapor chamber cooling system, while its fan is equipped with new, wider blades that push more air and result in improved acoustics. It all sounds like a comprehensive upgrade package for anyone looking for the latest and greatest, though some patience will be required. The Radeon HD 7970 won't be on sale until at least January 9th, when AMD's recommended price will be $549 in the US and €499 in Europe.

Update: The early reviews are in and it looks like the HD 7970 is indeed the fastest single-GPU graphics card for gaming, but not by a tremendous margin. It looks to be both faster and cooler than the Nvidia GTX 580, the latter of which should validate AMD's claims of high overclocking potential. The $549 MSRP isn't a steal, however: you're paying for what you're getting, it just happens to be quite a bit. Read some of our favorite reviews at the source links below, or check out AnandTech's in-depth preview of Graphics Core Next right here. 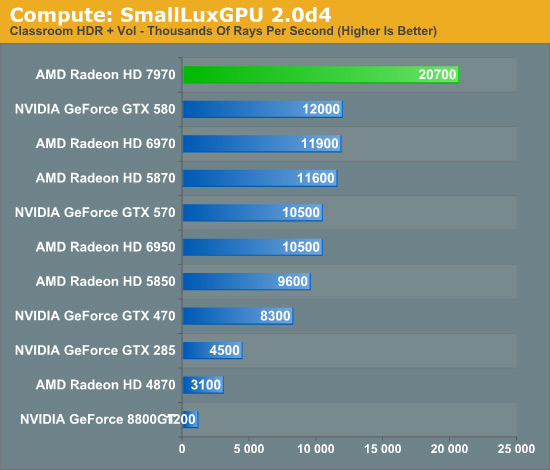