LG's tradition for pre-announcing its CES launches has today revealed the DM92 monitor, a 27-inch IPS display capable of playing back 3D content and featuring a hair-thin bezel.

LG's tradition for pre-announcing its CES launches has today revealed the DM92 monitor, a 27-inch e-IPS display capable of playing back 3D content and featuring a hair-thin bezel. LG claims it's just a millimeter on three sides of the display, while improved power efficiency in the DM92 should allow make it around 25 percent more efficient than current IPS panels. Full specs won't be available until the actual Consumer Electronics Show in Vegas three weeks from now, but those headline features are enough to whet our appetite.

Alongside the DM92, LG will be introducing DM82 and DM52 models, which will serve to trickle down the 3D-capable IPS displays to lower price points. The DM82 comes in a 23-inch size (with two 7W speakers built in), while the DM52 will be available in both 23- and 27-inch form factors. Rounding off the new range will be the 3D-centric D43, which comes with a built-in 2D-to-3D converter. All of LG's new monitors are set for a global release in February 2012. 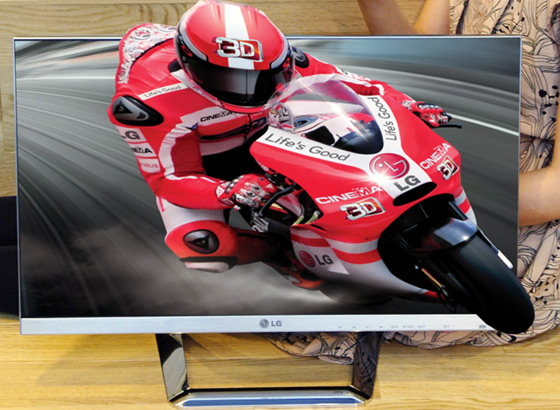