A good smartphone comes but once a year

The seed for this editorial was planted in my brain the day that the HTC Amaze 4G was released on T-Mobile 119 days after its predecessor, the Sensation 4G. It bears repeating: one hundred and nineteen days. Even now, it makes my head spin.

Share All sharing options for: A good smartphone comes but once a year

The seed for this editorial was planted in my brain the day that the HTC Amaze 4G was released on T-Mobile 120 days after its predecessor, the Sensation 4G. It bears repeating: one hundred and twenty days. Even now, it makes my head spin.

Love it or hate it, Apple has done many things right in its relentless march to smartphone dominance over the past five years; the company's strategic prowess in deploying and growing the iPhone is practically a college textbook unto itself. But recently, its talent for building a patient, deliberate product cadence around a single brand has really spoken to me. By falling into a (roughly) annual release schedule, Apple owns the entirety of the hype machine that surrounds the iPhone at almost all times — a hype machine that's predictable and whole, never fragmented. Every iPhone customer wants every new iPhone that Apple makes, because they have sufficient time to understand the new model, tire of the old one, and gain some traction on a two-year contract. That's an enormously powerful weapon in Apple's arsenal.

I think the best way to demonstrate what I'm talking about is with a graphic. Here, we're taking a look at Apple's phone releases versus HTC's since the start of 2010, plotted over time: 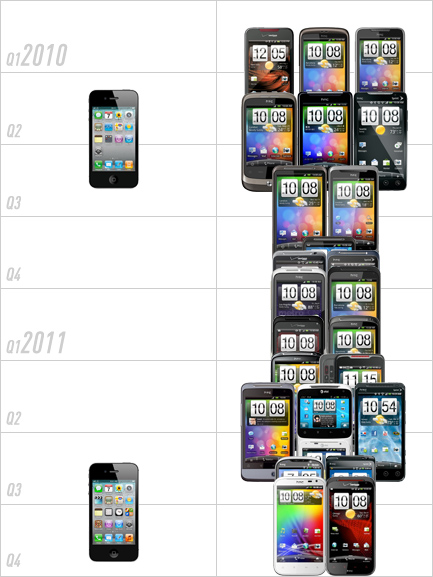 And this isn't even every HTC, I've left out the Windows Phone and Brew MP products plus a few regional and carrier-specific variants. Clearly, I'm not revealing anything new here — we all know that Apple releases one phone a year while other manufacturers tirelessly pump out dozens — but it really hit home for me just how wild this difference was once I could visualize it.

Don't get me wrong, the amount of continuous engineering and marketing required to release and support devices at this kind of pace is humbling. I don't know how HTC, Samsung, or anyone else in this business is able to sustain the pace of iterative innovation that we're seeing right now — it boggles the mind. But as impressive as it might be to technology and business process nerds, it's just as upsetting to the average consumer.

You alienate your best customers. Over and over and over again. How do you think Sensation 4G customers felt when their phones were bested less than four months later? Mobile is the one and only durable goods industry I'm aware of where a gnat-like product life cycle is considered "normal." From the consumer's perspective, there's no great reason why it should be — top-tier phones are $200 to $300 upfront these days, and the financial commitment around that device can add up to $3,000 or more. This doesn't happen in home theater, it doesn't happen in gaming, and if you don't include component spec bumps, it doesn't happen in the PC business.

You induce paralysis at the register. After a few cycles of this madness, consumers catch on that they're stuck in a zero-sum game. They're always asking themselves (and us) what's around the corner. You deny them the comfort and the reassurance of knowing that their device will be "the best" in its class, if only for a while.

You confuse people. No human, much less a paying consumer standing in line at a corporate-owned carrier retail store, can keep track of 30-plus Android phones from a single OEM in the span of two years. If they claim they can, they're lying to you.

You make it more difficult on yourself to keep devices updated in a timely fashion. This one's just simple math: more SKUs means more firmwares, and more versions of those firmwares. Each of those versions needs the care and feeding of an engineering team, and there are only so many engineers to go around. If a particular model is unpopular — which is more likely when you're releasing a countless array of them — long-term support becomes an even greater risk. Think of the HTC Aria versus the wildly successful HTC Evo 4G, both released around the same time.

Obviously, there are many forces at play here, none more powerful than the American carrier bloc. Verizon, AT&T, Sprint, T-Mobile, and the largest regionals all want their individual whims and design concerns catered to — and more often than not, they want their own model names attached to the devices. It's a practice that robs manufacturers of their identity and their ability to control the product cycle. It's a malaise that only Apple has been able to shake off thus far.

There's hope, though. Among Android manufacturers, Samsung seems to be fighting the hardest to establish a meaningful identity, focusing its products around the Galaxy name since the release of the original Galaxy S in early 2010. That's good, and regular consumers now seem to be recognizing that the term "Galaxy" goes hand-in-hand with Samsung and Android — strong word association, which is exactly the kind of thing you're trying to achieve with a good branding campaign. Even more importantly, Samsung looks poised to establish a yearly cadence for its premier line: the original Galaxy S in March of 2010, the S II in February of 2011, and in all likelihood, the S III in February of 2012 at Mobile World Congress.

Coincidentally, ridiculous names like "Galaxy S II Epic 4G Touch" serve as evidence that carriers are fighting Samsung's attempt to establish its own carrier-independent identity — and that Samsung isn't backing down. It's the right move. OEMs can't continue to be goaded into producing dozens of similar, incremental devices when it doesn't serve either the end users' best interests or their own. Historically, Nokia and Sony Ericsson have been pretty hard-headed about this — hopefully that trend will continue as both brands reinvent themselves in 2012 — and Samsung's heading in the right direction. If HTC, LG, and Motorola can all stay strong, the world will be a better place (and there's already evidence that HTC is looking to release fewer devices next year). That's not to say carriers wouldn't look to backfill some of their bespoke requests with second-tier OEMs like Huawei, ZTE, and Pantech, but you can't displace the big-name manufacturers in the most visible product segments — no matter how unbending they may be.

It's simple: make a large high-end device, a smaller value device, and a QWERTY device. Maybe one or two other specialty form factors, tops. That's it. Update them once a year, and keep the names the same.

Goodness knows you're running out of names, anyway.