A modder from Bacteria Forums has created his own portable version of the Atari Jaguar.

Originally released in 1993, the Atari Jaguar was far in advance of the Mega Drive and SNES that it aimed to compete with, but despite its technical advancements it failed to gain ground and was the last console from Atari before it left the gaming market. It's retained a devoted following of hackers and modders, though, famously including Ben Heckendorn who created his own portable version of the console back in 2006. Following in his footsteps, Bacteria Forums user Evil Nod has created his own, and it's slim, sleek, and gloss black. Evil Nod's got prestige here, too — in the past he's also produced a portable N64, Mega Drive, and even a Saturn.

The production process is extensively documented, down to each step of trimming down the controller and console and putting them into the custom designed case. The final result isn't small, by any means, but looks a lot more ergonomic than Ben's version. He's also built a custom storage and carrying case, giving it that extra sense of panache. Games run smoothly on the unit as you'd expect, though the builder doesn't give an idea of battery life or weight — factors that can make or break a portable system. 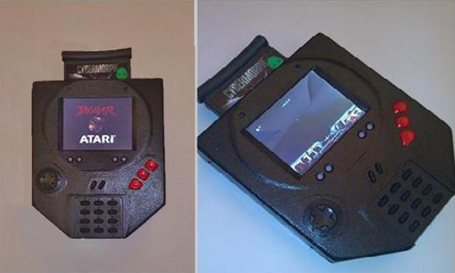