Toshiba takes a second stab at this tablet thing with a 7-inch, Honeycomb device

Toshiba hasn't had an easy ride in the tablet market. When we reviewed the original Thrive tablet this July, it wasn’t only thicker and heavier than the rest of the 10-inch tablets out there (Toshiba claimed the bulk was necessary to house an array of full-size ports), but it was also stricken by charging and build issues. It really was far from the "work of progress" that Toshiba marketed it as, but the 7-inch Thrive stands a much better chance of living up to that claim. While the $379 tablet has the same internal specs — a Tegra 2 processor, 1GB of RAM, and 16GB of storage — it costs less than the original Thrive without sacrificing its high resolution 1280 x 800 7-inch display. So, does the Thrive 7 change the tide for Toshiba? Or should the tablet maker scrap the Thrive lineup and start thinking a bit harder about what “progress” really means? Read on.


Mini Thrive. That's what Toshiba should have called the 7-inch Thrive, since it truly looks like a shrunken version of the original. Everything from the ribbed back to the chrome surrounding the cameras (and down to the flimsy port flap) is a carbon copy of the styling and design of the larger model. The only major change is that the black rear cover isn't replaceable like it was on the 10-inch version. There's really nothing wrong with the look of this tablet from afar, but in hand there are some noticeable quality issues. Not only does the back feel overly plasticky, but there appears to be a gap between the plastic and the internal back wall of the device causing an annoying creaking sound when you hold it. It simply isn't as well made as other 7-inch tablets out there, including Samsung's Galaxy Tab 7.0 Plus, and even the Kindle Fire or Nook Tablet, which cost half as much, demonstrate better build quality.

If your ears aren't put out by the annoying creaking, the Thrive does feel nice in hand from a form factor perspective. The smaller footprint makes it easy to grip, and at .8 pounds it’s light enough to hold it up for longer periods of time. The 7-inch is thinner than the original by .14 inches, but still not as thin as Samsung’s Galaxy Tab 7.0 Plus or the Kindle Fire. Unfortunately, that size decrease also means that the original's full-size ports also had to be shrunk to compensate. Under the left edge's aforementioned plastic flap are Mini USB and Micro HDMI ports and a microSD card slot. (I have no clue why Toshiba opted for the Mini USB over the more common Micro port; digging up a Mini USB cord was a chore when I wanted to transfer over some pictures.) A 3.5mm headphone jack lives along the top edge. 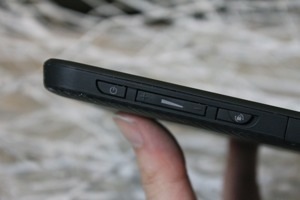 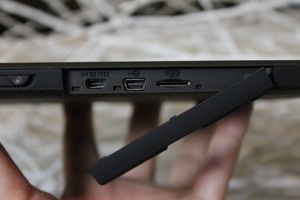 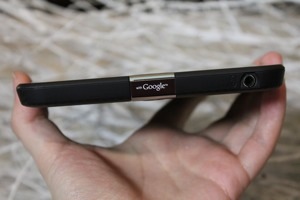 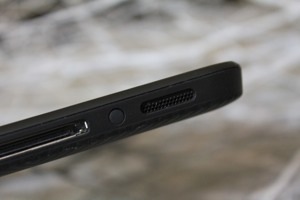 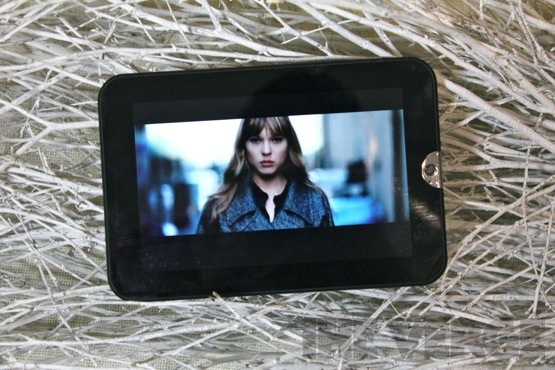 Sadly, Toshiba didn't go with an IPS display like in the Nook Tablet or Kindle Fire, but the 1280 x 800 resolution and 209.8ppi pixel density makes up for the lack of wide viewing angles. While the panel itself isn't as bright as others, text and pictures look very crisp. The same clip of The Wire looked much sharper and more detailed on the Thrive than it did on the Fire, and that has to do with the higher resolution you get here. Of course, viewing angles aren't as wide as the ones on the Nook Tablet or iPad 2, but you can still hold this tablet off-axis and see what's on the display. The two speakers on the bottom of the tablet were loud enough for everyone in the big room of our office to hear bits of the Megaupload song, but sound was quite tinny.

I can't start this camera section without first talking about the terrible placement of the lens. Just like on the original Thrive, the 5-megapixel camera is awkwardly placed in the middle of one end, and since it’s more natural to hold the tablet horizontally to take a shot, I consistently blocked it with my finger. On top of that, the camera is very slow to take shots. It takes a good three to four seconds for the shutter to actually snap, which means that at first all my photos came out blurry since I'd move the tablet before it would actually take the picture. Those issues in combination make for a pretty terrible photo experience, and to top it off, the images aren’t all that great. It's a similar situation on the video front and while Toshiba claims the Thrive can capture 720p video, footage I shot outdoors didn’t look all that "HD" to me.

Undoubtedly you know what I am going to say about the 2-megapixel front facing camera; it is good for video chatting and that's about it. Still photos look grainy and incredibly washed out. 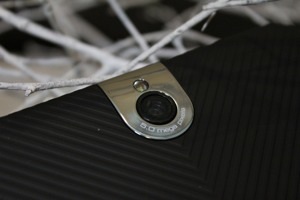 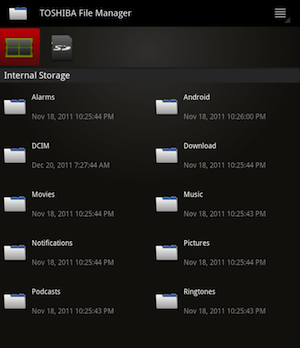 Toshiba has done very little on top of Google's Android 3.2 operating system. It added a file manager and a handful of third-party apps, like Kaspersky Tablet Security and Need for Speed Shift. What that really means is that many of my complaints about Honeycomb — application selection, sluggishness — still remain, but they haven’t been exacerbated very much by skins or bloatware either. While the lack of tablet apps on some other 7-inch tablets isn't as bothersome because of their lower 1024 x 600 resolution panels, the higher 1280 x 800 resolution here makes it more noticeable. For example, the Twitter app leaves lots of white space, though the new Twitter website is a pretty compelling experience on a tablet. That said, other tablet apps, like Google's new Currents, look nice on the tablet.

ICe cream sandwich on the horizon

Toshiba hasn't given a timeframe on the Thrive 7-inch's Ice Cream Sandwich update, but it’s coming, and I really feel like it will make a very, very big difference in terms of usability. ICS really has added significant polish to the platform, and, above all, I just want to be able to swipe away open apps in the app shortcut bar. I anticipate that large tweaks like that and other small tucks will make these tablets much better once ICS arrives for the larger screen. 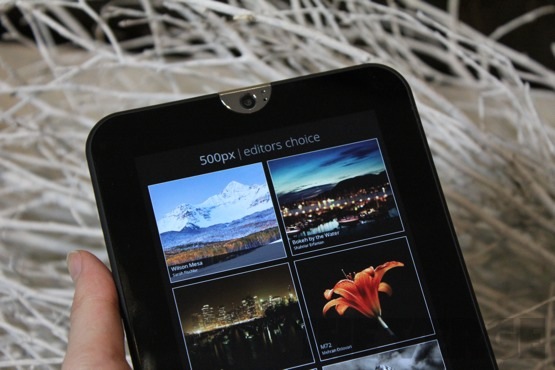 I mentioned that Honeycomb sluggishness before, and it really is apparent on the Thrive. It could be that I have now spent a significant amount of time with the quad-core Tegra 3-powered Asus Transformer Prime, which responds swiftly to swipes and opens applications quickly, but the Thrive just feels slow when it comes to doing those things. Browser performance, on the other hand, was good, with responsive scrolling and swipes. Similarly, graphics performance in games like Shadowgun was good. Still, I'd say the overall performance feels slower than other equally specced tablets like the Galaxy Tab 7.0 Plus.

Battery life is also disappointing. On the Verge Battery Test, which loops a series of 100 websites and intermittently downloads photos with brightness set at 65 percent, the tablet's 15Wh battery lasted only 3 hours and 51 minutes. That’s pretty bad, especially since you cannot swap out the battery like you could with the original. On the same test, the Galaxy Tab 7.0 Plus lasted seven hours and the Kindle Fire lasted almost six. The battery does charge up rather quickly, but it has to be done through Toshiba’s chunky proprietary port on the bottom of the system; the Mini USB port won’t charge up the cell. 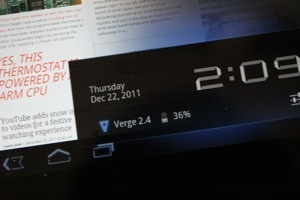 The second installment of the Toshiba Thrive story ends better than the first, but that isn’t really saying much. The nice, pixel-dense 1280 x 800-resolution display can only do so much for this $349 tablet; it just isn’t enough to combat the creaking and poor build quality, the camera placement, and the lagging performance and battery life. The $399 Samsung's Galaxy Tab 7.0 Plus may have a weaker display and TouchWiz skinning, but it’s a better, more well-rounded option for those looking for a 7-inch Honeycomb tablet. Of course, if you're looking for a 7-inch tablet for just basic browsing, media consumption, and access to a handful of Android apps, the $199 Kindle Fire will more than suffice. And there you have it: Toshiba’s going to have to think a lot harder about what progress really is to thrive in this new and fierce tablet market.