Airtight App turns your Google TV into an AirPlay receiver

A new app has hit the Android Market for Google TVs, adding AirPlay functionality that allows you to stream video from your iOS devices or iTunes direct to your Google TV.

Share All sharing options for: Airtight App turns your Google TV into an AirPlay receiver

A new app has hit the Android Market for Google TV devices that allows them to act as a receiver for Apple's AirPlay-enabled devices. Named Airtight, it's still fairly early in development, and there are a few limitations — it's only able to show video and photos for now, with music being "looked into," and anything protected by DRM is currently unsupported. While Android devices have been able to act as transmitters to other AirPlay hardware via the DoubleTwist app, this is the first time we've heard of one of Google's devices being able to receive video using the protocol. It's still new to the market, so user reception is thin on the ground, but so far seems positive. While Apple might look the other way, AirPlay's still a proprietary technology and this isn't something Apple's given its blessing to. If you feel like giving the app a try — work in progress, bugs and all — it's available to download now for $0.99. 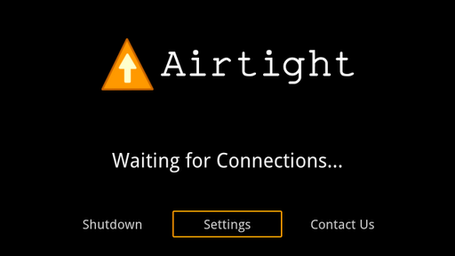