Apple's licensed at least one iOS software patent related to scrolling functionality to Nokia and IBM, and offered a license to Samsung during failed settlement negotiations in November 2010.

Until now, it's been assumed that Apple's playing absolute hardball in its various patent lawsuits around the world — that the company has no interest in licensing its patents, especially patents that cover fundamental parts of iOS. Turns out that that's not entirely true: Apple's licensed at least one iOS software patent related to scrolling functionality to Nokia and IBM, and offered a license to Samsung during failed settlement negotiations in November 2010.

The patent in question is #7,469,381, which covers the distinctive "scrollback" behavior of iOS that displays a background texture when you scroll beyond the edge of a document of webpage. Apple asserted this patent against Samsung as part of its failed attempt to get an injunction against Galaxy devices, and the court order denying the injunction includes general discussion of how past licensing behavior affects the decision of whether or not to grant an injunction. The discussion is nestled among two redacted statements shown to The Verge that confirm the '381 patent was licensed to IBM and Nokia, and that Apple offered a license to Samsung in November of 2010 as part of settlement negotiations. 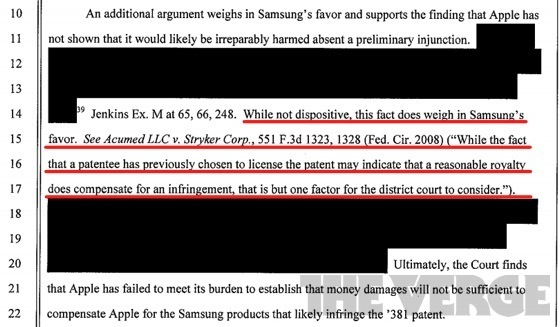 You might remember that Apple confirmed it cross-licensed some patents to Nokia when the two-year conflict between the two was settled this past summer, so we'd assume '381 was among them. What's interesting is that at the time Apple said it had retained "the majority of the innovation that makes the iPhone unique," but it's hard to think of features in iOS more distinctive than its scrollback behavior. (Stock Android and Motorola's skin use a different pulsing highlight behavior to indicate that you've reached the end of a list.) What's more, Apple's sued Samsung, Nokia, and HTC over '381, which would usually indicate that Cupertino thinks it’s a strong patent, and the court agreed that Apple was likely to prove Samsung was infringing with its Galaxy devices. Offering up a distinctive software feature covered by a strong patent indicates a level of willingness to negotiate that we simply haven't heard from Apple in the past — it's a far cry from Steve Jobs telling his biographer that he was willing to go "thermonuclear war" on Google and Android OEMs for infringing Apple's patents.

What we don't know is how or why those November 2010 settlement negotiations fell apart: Apple could have been asking for exorbitant rates on a patent license, Samsung could have refused to pay because it thought the patents were invalid, or Jobs could have simply called the whole thing off. We also don't know if the two parties are still holding settlement negotiations or if things were put on hold as various courts around the world reached injunction rulings, and we don't know how Apple's inability to get injunctions to stick outside of Germany and the Netherlands — and Samsung's ability to quickly work around those injunctions — will affect another round of settlement talks. We'll see what happens next.