Australian chiptune hacker cTrix has taken music geekery to a new level, incorporating an Atari 2600 and some effects pedals into a guitar-like body to create the gAtari.

While Muse's Matt Bellamy might have integrated a Kaoss pad into his guitar, we think this goes one better in terms of electronic music geekery. An Australian musician performing under the pseudonym cTrix specializes in creating chiptunes using a combination of games consoles from 1977 - 1992, including a Commodore 64, Amiga 500, a clear-cased Gameboy, and an Atari 2600. The latter is possibly the most striking setup, incorporating the Atari (running custom-written sequencing software) into an oversized guitar body, with a fretboard packed with Boss stompboxes and a great pun as a name — gAtari. 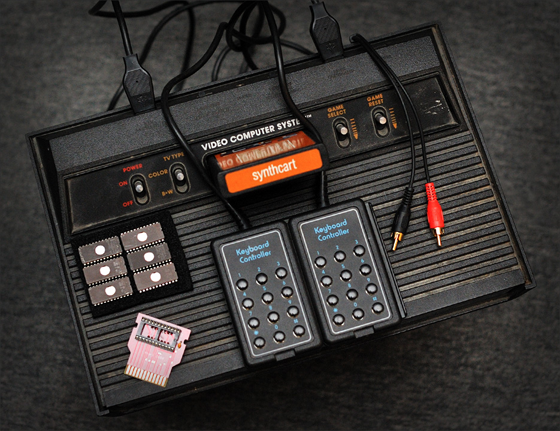 The result is a full-on rave, despite the limitations of the Atari's sound circuitry — the console is only capable of 31 pitches, with "minimal" waveforms and only two channels — as seen in May this year at the Blip Festival in New York. Possibly the most striking factor about the gAtari is the way it allows for a greater performance than the same setup on a table would, allowing the crowd to see exactly what you're doing to manipulate the sound. If you want to catch him live, cTrix is bringing his full setup on a European tour early next year.