The HTC Radar 4G is T-Mobile's first Windows Phone device to debut with Mango and the carrier's first one with HSPA+. More importantly, it's also the only Windows Phone T-Mobile is currently selling and seemingly the only smartphone in its library that isn't black or dark gray. The 3.8-inch slate has a sturdy aluminum build with a smooth plastic bottom, a Super LCD screen, and 5-megapixel camera. Is that enough to make it stand out over its Android competition on the carrier? Read on to find out.

It's clear that HTC has grown rather fond of the white-and-metallic aesthetic, having used it for the Sensation XL, the Flyer tablet, and now this 3.8-inch slate. In fact, it’s not too much of a stretch to think of the Radar's chassis as a shrunken-down version of the Flyer’s — pretty striking in comparison to the usual dark plastic of most smartphones. An aluminum frame wraps around the phone, separating three distinct patches of white: the glass-covered display with white border, the bottom cover that detaches and houses the SIM card, and a curved strip of plastic on the top back that encloses the camera, LED flash, speaker, 3.5mm headphone jack, and the power button.

Measuring 4.74 x 2.42 x 0.43 inches, the Radar 4G is slightly thinner than most of HTC’s other Windows Phone 7 devices with a notable exception being the 4.7-inch Titan. Looking at the smartphone landscape as a whole, however, it’s certainly not the thinnest of devices — but it’s also not the thickest. Nor has it been uncomfortable at all to pocket. The height and width are pretty comparable to HTC’s CDMA-equipped Arrive and Trophy, and seem about on par for most 3.8-inch slates.

The standard three capacitive Windows Phone buttons lay flush below the screen, and above it, there’s a front-facing VGA camera and familiar HTC / T-Mobile insignia. A front speaker is housed above that under a small grill. Going further up the phone, there’s the aforementioned 3.5mm headphone jack and power button that I found to be sturdy but at times perhaps a little too hard to push down and wake up the phone. On the right edge, there’s a long volume rocker and a dedicated camera button; on the left, there’s just a small alcove that protects a MicroUSB port. The bottom edge of the phone is a slippery-smooth plastic curve that pops off for accessing the SIM card. There is no SD card slot of any size, and no, the battery isn’t removable. One other thing worth noting here is that, once you remove the chin of the phone, it automatically turns itself off. Keep that in mind when waiting for important phone calls.

The plastic portions of the chassis have managed to stay relatively clean after a week of use, and smudges, though they do appear at regular intervals, seem to wipe off with ease. Though I wouldn’t recommend sliding your nails across it — a disconcerting feeling not unlike chalkboards, to be sure — the metallic frame feels very sturdy. The entire phone, in fact, is very well-built and put-together. The one knock I would give here is that the seam between the aluminum frame and front panel isn’t as solid as it should be; I’ve definitely managed to get some dirt stuck in between that I can’t get out, and given the white body, it’s fairly noticeable. 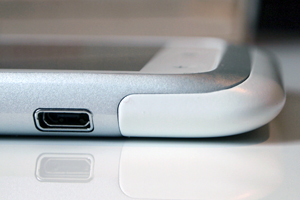 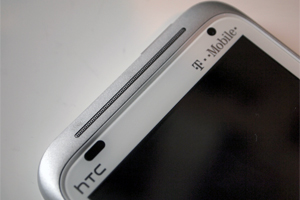 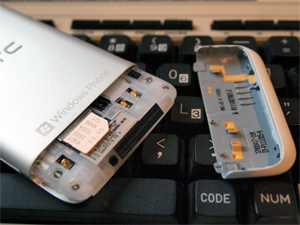 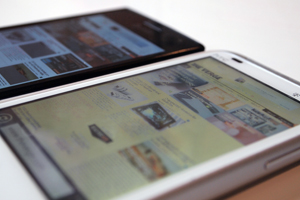 The funny thing about the displays on Windows Phone devices is that sometimes smaller is better, given the universal 800 x 480 resolution and subsequent pixel density. I found the 3.8-inch screen size quite nice and the display overall very bright. On its own, I had no problem with the color vibrancy, but when compared next to the Focus Flash’s Super AMOLED screen, it was clear that the shades of blacks didn’t have the same fullness. The viewing angles were decent both horizontally and vertically. Where the Radar 4G shines, however — quite literally — is that it could get much brighter. It also felt a bit warmer, less bluish when side-by-side. It was easier to read in the sunlight, but overall I still prefer the Super AMOLED screen found on Samsung's devices.

I spent a good week using the Radar 4G as my primary phone, and in general I'd get somewhere between a day to a day-and-a-half of use before having to recharge — not too bad. I lent the device to Thomas Houston for the Spotify event this week, and after using the internet sharing feature heavily for over an hour — uploading images, having multiple chat clients open, browsing multiple sites — the phone dropped about 50 percent charge.

The Radar 4G has a 1GHz processor and 512MB of RAM, which translates to minimal at best sluggishness in the menu system and most apps. I noticed the Focus Flash (with a 1.4GHz CPU) felt a hair speedier and less sluggish in the menus, but that was only noticed when placed side by side.

Anyone I talked to sounded tinny on phone calls, but on the reverse, I was told I sounded clearer than I usually do on my AT&T iPhone 4. The speaker is located on the back of the phone, which means when you're laying the phone down, that tends to get muffled — an odd design choice given you'll mostly be using the speaker when the phone is on a desk or table. There is, alas, no Wi-Fi calling.

Given the pretty stringent hardware restrictions Microsoft has dictated, camera is one of the few places where Windows Phone devices can differentiate from one another. The Radar 4G's 5-megapixel sensor and f/2.2 lens took better pictures than the Focus Flash but still suffered some similar issues with the colors looking slightly washed out. It doesn't seem to handle contrast well and takes too long to autofocus. We tried pretty hard to do some decent macros, and none really came out that great. Low light tended to be pretty grainy. You can start snapping photos without unlocking the screen via the hardware camera button, but even then it takes several seconds for the app to load up.

Because Windows Phone software likes to default to VGA video even after changing the setting and leaving the app, most consumers won't really use the 720p HD recording option. In either case, though, the video tells the story but does so with noticeable motion blur, odd intervals of refocusing, and audio capture that's pretty rough and tinny.

HTC's Photo Enhancer app allows for a number of filters both for creating faux-vintage stills and for being silly with the photo. A few of the tamer options actually fixed up some of my color complaints from before, and none of the alterations save over the original file — thankfully, you get copies each time, leaving the original file untouched. 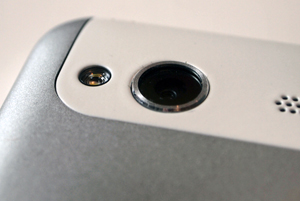 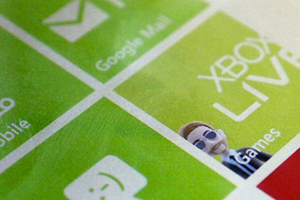 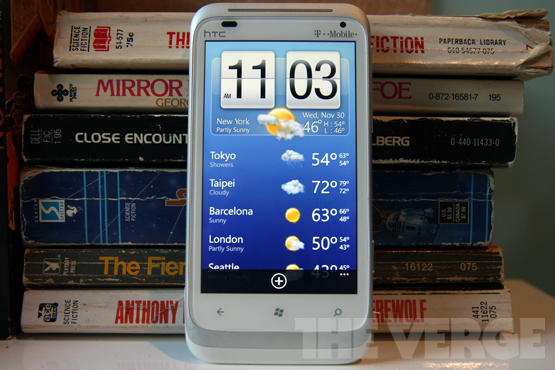 Microsoft has kept Windows Phone a pretty consistent experience throughout, but HTC did manage to add a theme and some key apps. The HTC Theme is a white background with green icons, which is actually quite nice until you pin the Xbox Live icon to the home page and realize it's a slightly different green hue — a bit jarring if you stare long enough (pictured, left). The HTC Hub app is like a window to Sense, in that it opens up a pane that's not entirely dissimilar to the homepage found on the company's Android skins, complete with a clock and weather widget. You can track the weather of multiple cities, and clicking on any will give you more detailed results care of AccuWeather. You can also swipe over to see stock and news feeds and a list of featured apps. If you used the Hub app prior to Mango, some of the aesthetics will feel nicer, but the differences aren't too crazy. The HTC Watch app is also included, but this isn't really the screen for purchasing and video. On that note, Netflix comes pre-installed and streams decently over T-Mobile's network — I watched the first 20 minutes of Johnny Dangerously on a treadmill, and though grainy, the stream came in clear enough.

Other than the apps, what you're getting is more or less the same Windows Phone 7.5 Mango experience as every other device running the platform. In fact, I'm going to say exactly what I did in the Focus Flash review, which was itself a call to Chris Ziegler's Mango review from late September:

Microsoft is continuing to evolve the OS in all the right ways, but it still hasn't quite matched the functionality of its iOS or Android peers. It's a gorgeous and stylish user experience, but it only takes a few minutes before you come across some oddities — no mass transit option for Bing directions, quirky multitasking that seems all too quick to close some earlier apps, a hardware search button that takes you to Bing instead of searching inside the currently-open application. The app ecosystem is quickly improving and again Microsoft is making all the right updates, but it's still not yet at the level of its competition.

As I've said many times before, Windows Phone devices have very few ways of differentiating right now. There’s hardware design, display quality, camera, and a few bundled apps. The Radar 4G falls below the overall quality of the 4.7-inch Titan, but with a $99 on-contract price tag, it’s clear HTC intended this for the midrange / entry-level market. If you’re unquestionably sticking with T-Mobile and want to dip your toes into Microsoft’s ecosystem, the Radar 4G is quite literally your only choice; you might find a year-old T-Mobile HD7 for pretty cheap, but what you’d be giving up is HSPA+, a Super LCD display, and that “new phone smell,” so to speak.
For the carrier agnostic, neither Sprint’s HTC Arrive nor Verizon’s HTC Trophy is going to feel that much different here. Only AT&T is offering a number of different Windows Phone choices in the US right now, and of those, I’d suggest taking a look at Samsung’s new Focus S and Focus Flash before making a decision. Finally, for the platform agnostic — for those who aren’t committed to purchasing Windows Phone hardware — I’m still not quite sure I can recommend this over an Android phone of similar value. Still, the price is hard to argue with, and if you’re the adventurous sort, by all means jump into a new ecosystem and give it a shot.
Want more? Compare the Radar 4G to the HTC Titan, Samsung Focus Flash, and more in our product tool!