Leaker email to retailers says Galaxy Nexus will be on sale at Verizon stores on Friday December 9th.

The latest leak for the Verizon Galaxy Nexus shows a Friday, December 9th sell date, not December 8th as previously rumored. The new date comes courtesy of an email supposedly distributed to store management ahead of the retail launch.

While we know it's coming in December for $299 on contract, the specific launch date has thus far eluded us, leaving mankind with nothing but rumor, speculation, importers to guide their holiday purchasing decisions. According to the leaked email, the Galaxy Nexus can not be displayed or sold prior to this coming Friday.

Of course, we don't expect Verizon to make much of a fuss when this pure Google handset does finally hit since it'll be competing directly with Verizon's own Droid brand of Android devices. That's ok, you don't need an army of exploding robots to convince you that Verizon's LTE Galaxy Nexus is the best Android handset on the market — that's what our review is for. 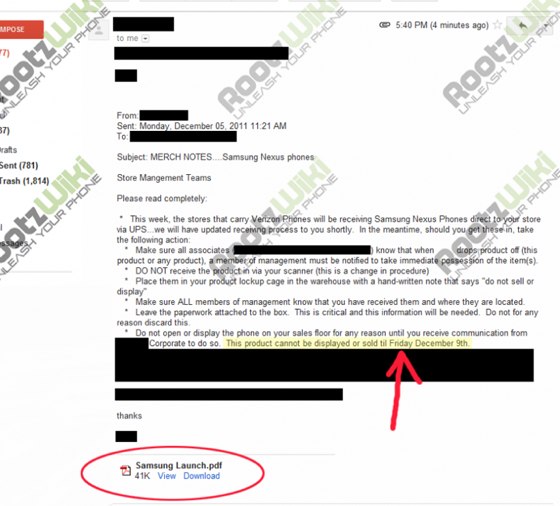