New pictures have leaked of the alleged successor to LG's pricey G-Slate, the Optimus Pad LTE.

New pictures have surfaced of the alleged successor to LG's pricey G-Slate that confirm it will be an LTE device. Images of the new Optimus Pad first appeared around Thanksgiving, but its 4G status was unclear at the time; one of the new photos, published by Korean site Cetizen, clearly shows off an LTE startup screen. The tablet is reported to include a 1.5GHz Snapdragon processor, an 8.9-inch, 1280 x 768 TFT screen, and 1GB of storage (a microSD slot is also included). Featuring both a 1.3-megapixel front-facing camera and an 8-megapixel rear-facing shooter, the tablet will be running Android 3.2.1 Honeycomb at launch — though an upgrade to Ice Cream Sandwich should be forthcoming. Of course, no details are confirmed until LG itself makes an official announcement.

While there's no hard information on pricing or availability yet, the device is rumored to be shipping by the end of the year. Check out the photo below to see how the Optimus Pad LTE sizes up with an 8.9-inch Samsung Galaxy Tab. 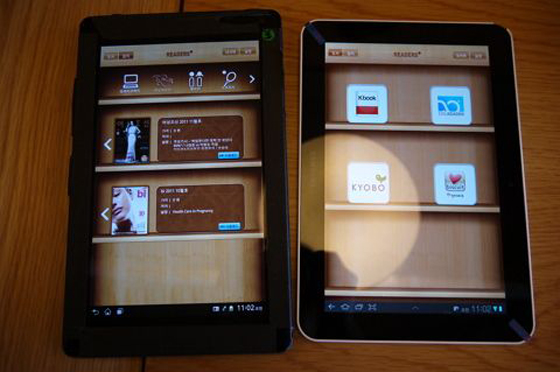