Google just introduced an interesting new magazine application called Currents for Android and iOS devices, which feels very much like the company's riff on social readers like Flipboard or Pulse.

Share All sharing options for: Google Currents for Android and iOS offers magazines from Forbes, Fast Company, PBS, and more

Google just introduced an interesting new magazine application called Currents for Android and iOS devices, which feels very much like the company's riff on social readers like Flipboard or Pulse. It's being launched with 150 publishing partners, including PBS, The Huffington Post, AllThingsD, Forbes, and Fast Company, but users can add RSS feeds, Google+ streams, and other photo and video feeds to the mix, and other publishers can easily get their content into the app using Google's free tools. The whole thing is integrated with Google+ and Google Analytics as well — users can easily share to Google's social network, and publishers can see what content is most popular.

We just played around with it a little, and it's indeed very much like Flipboard — you can easily jump between publications, and articles are generally nicely laid out. The interface is basically the same on Android tablets and the iPad, which leads to some weirdness — there's a home button on the bottom of the article view, so you end up with both the app home button and the standard Honeycomb home button on the screen at the same time, for instance. That said, it definitely works, and most of it is fairly well-thought-out — it's clear Google thought long and hard about why people would use an app like Flipboard instead of the browser and decided to try and nab some of that traffic for itself. 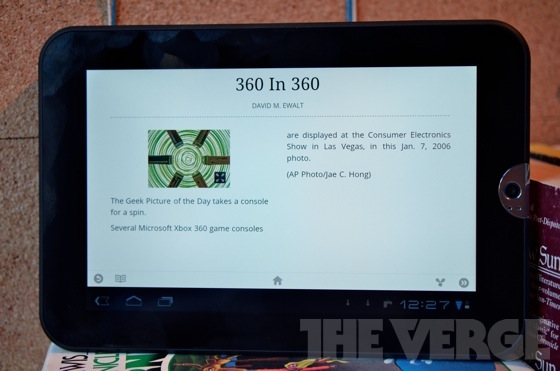