The first time I laid eyes on the LG DoublePlay, I thought I was in love. I'm a former T-Mobile Sidekick / Danger Hiptop fan, you see, and both physical keyboards and rapid multitasking are near and dear to my heart. So when LG spit out a Android smartphone with not only a split keyboard, but also a 2-inch secondary display to swap between apps on the fly, I figured it was the phone for me despite its fairly low $99.99 pricetag on contract.

Besides, the pedigree checked out: T-Mobile's Sidekick 4G impressed us earlier this year for the same price, and the LG Optimus One set a respectable bar for low-end smartphones back in 2010. What could go wrong?

Almost everything about the phone's physical design, for one. It may look perfectly fine in the press pics, but the LG DoublePlay is an absolute brick in the hand, well over half-an-inch thick, and weighing nearly half a pound — heavier than even massive slabs like HTC's Evo 4G, Amaze 4G, Titan and Rezound, and even a touch more than the tank-like Droid 3 and HTC Arrive sliders. In recent memory, only the Kyocera Echo, with its twin 3.5-inch screens and hefty folding mechanism, could balance the scales evenly. Here's a handy comparison chart.

To add insult to injury, there doesn't seem to be any perceptible reason for the extra weight here. Unlike any of the devices I refer to above, the DoublePlay has a distinctly cheap feel. While it does have a solid sliding hinge with very little play and I like the gunmetal-gray and silver motif, it feels like a predominately plasticy device and it can creak when held. The phone's ergonomics are pretty terrible, too. Remember how I said the DoublePlay was a brick? It's also easy to drop, with smooth edges and a lack of grippy surfaces to keep it from slipping out of your hands.

Slide open the screen, and and it will be time to come to terms with the cramped, awkward layout of its smaller two-inch counterpart and a split-keyboard backlit by blue LEDs. Obviously some sacrifices had to be made to fit the miniature touchscreen, but the four-row keyboard not only ditches niceties like hardware search buttons for quick multitasking, but also any kind of spacing or staggering between its tiny keys. Their domed caps only served to make my thumbs press two keys at a time by falling into the valleys in-between. I did manage to bang out some email with the hardware keyboard, but I dreaded it every time, and I think this might be the first smartphone with a physical input mechanism where I preferred using Swype on the touchscreen.

Also, as we discussed earlier, you've got to keep a good grip on this phone to keep it from slipping out of your hands, but for whatever reason LG put the power button right along the curved surface you're likely to grip when typing. I often ended up accidentally shutting off the screen when trying to send out texts. There's nothing particularly wrong with the other minimalistic controls, though. The volume rocker has a firm, clicky actuation and a useful notch to tell up and down apart, and the typical four capactive buttons below the screen work well. The Micro USB port is covered by an unobtrusive pull-out shield, and the battery cover's easily removable if you want to swap cells out. 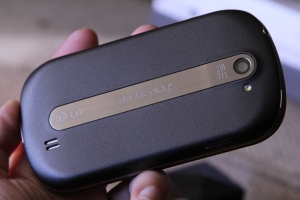 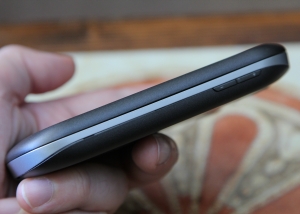 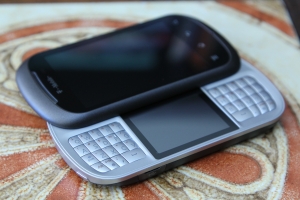 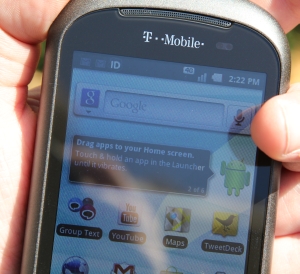 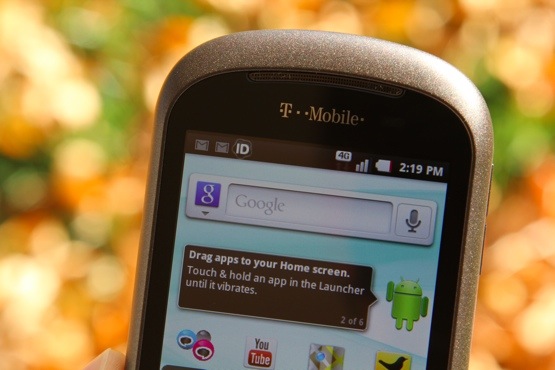 Speaking of those screens, one of them is reasonably good, but unfortunately it's not the big one. Despite the comparatively gigantic size of the DoublePlay in today's market, LG opted for a 3.5-inch HVGA (480 x 320) resolution screen here, and from the distance you'll typically be interacting with the phone, that 165ppi pixel density makes for grainy viewing. Given that free-on-contract smartphones often boast larger screens and 800 x 480 resolution, the $100 DoublePlay feels exceptionally dated in this department. The screen also exhibits some pesky ghosting when you scroll. Also, the screen washes out colors slightly and it loses brightness when viewed at off-angles, but we don't really expect you'll be sharing a messaging phone with a friend that often anyhow.

The way the screen handles sunlight is pretty interesting, though. There appears to be some sort of anti-glare filter beneath the glass that dissipates light to make the screen easier to read outdoors, though it simultaneously makes it look like your images are filled with tiny indigo dots.

By comparison, the tiny two-inch QVGA (320 x 240) secondary display is clear, bright and colorful, but it doesn't really matter because of how little you'll be using it. 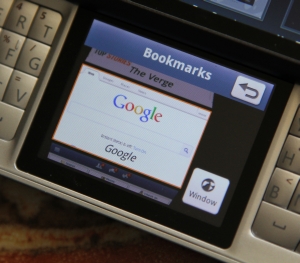 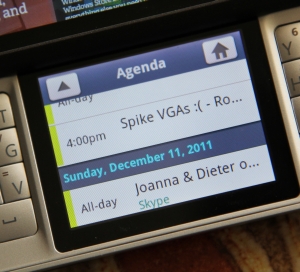 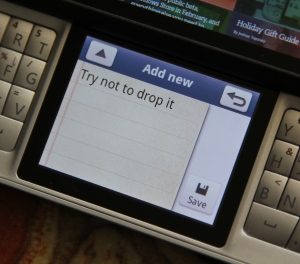 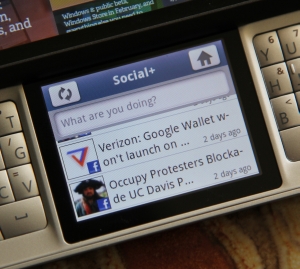 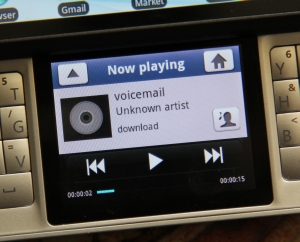 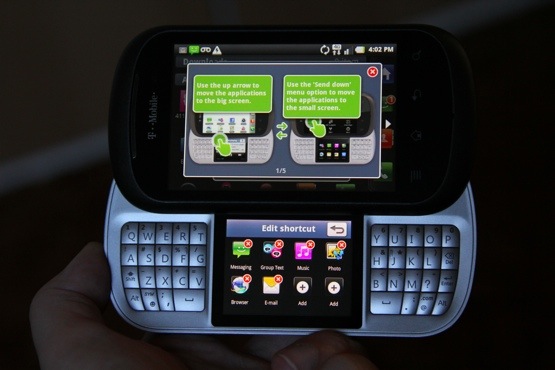 LG is such a tease. Take a look at the DoublePlay's miniature display. It looks just like the Android app drawer, no? That's just what I thought: I expected I'd be able to use the tiny screen as a app launcher for the entire phone. That's not how it works at all. Rather, the DoublePlay gives you precisely eight slots for specialized apps that run on the tiny screen of the phone... and only nine apps to choose from. You can't add your own. While a few of the selections could be genuinely useful, don't be fooled. The second screen is more gimmick than tool. Here's what you'll have access to:

Otherwise, you're looking at Android 2.3 with the typical LG and T-Mobile tweaks, preinstalled apps like Telenav GPS, Polaris Office, Wi-Fi Calling, Slacker Radio and T-Mobile TV, as well as shortcuts to install trial versions of Bejeweled 2, Tetris and SimCity. I'll never understand why carriers don't pre-install the bloatware for you, at least, rather than have you spend precious minutes and megabytes only to find out you've got a demo rather than a full game.

The LG DoublePlay won't blow away any benchmarks, but it's pretty reasonably specced for the price. With a 1GHz Qualcomm Snapdragon S2 chip and 512MB of memory, it kept up with the Android UI just fine, and though I certainly wouldn't want to view desktop-size web pages on the DoublePlay's screen, they loaded rapidly over T-Mobile's HSPA+ network. If you're fond of numbers, you'll probably be happy to hear we notched scores of around 1200 in Quadrant, not bad for a single-core 1GHz phone, and we pulled down as many as 6Mbps when tethering over Wi-Fi.

Similarly, while you shouldn't expect the DoublePlay to run all the latest games, it certainly runs quite a few. Angry Birds Rio and World of Goo worked quite nicely, as did Air Attack HD, and we were even able to play Minecraft Pocket Edition, although we saw some noticable slowdown there. (Shadowgun also runs, but it stutters like mad.) Mind you, none of these games looked very good on the DoublePlay's screen, and the device's terrible rear speaker also doesn't help matters there. 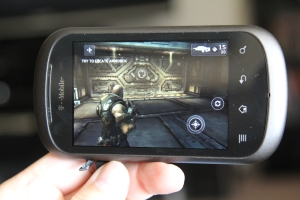 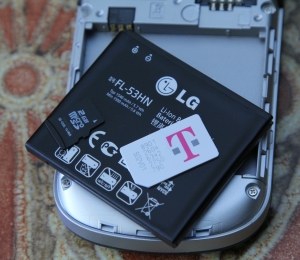 As long as we weren't using the aforementioned speakerphone, call quality was fine, about what we expect from T-Mobile in San Jose, California. Coverage can be spotty in certain parts of the city, and the DoublePlay didn't seem much better at picking up a signal there. We did have trouble getting a GPS fix on one occasion, but it might have been a fluke.

Battery life was actually surprisingly decent for a dual-screen device. With heavy use or as a 4G hotspot, we could drain the 1500mAh battery quickly, but we still got well over 24 hours with lighter loads. If you forget to plug it in at night, you can still spend part of the next day using the phone before it'll need to be recharged.

The camera on the LG DoublePlay actually isn't half bad. You'll definitely see a lot of grainy images indoors and after the sun goes down, but the five-megapixel sensor captures plenty of detail, colors were neither disturbingly vibrant nor unnaturally muted, and we generated some perfectly passable pictures when viewed at lower resolutions. Video quality isn't bad, either, and the 720p footage actually looks relatively high-definition, unlike the "HD" material we've gotten from some cheaper smartphone and tablet cameras in the past. 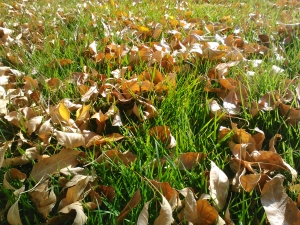 When I look at the LG DoublePlay now, I see a great idea that went terribly wrong. There's plenty you can do with two screens, but this handset barely scratches the surface. More importantly, between conception and release the physical hardware morphed into one of the heaviest, bulkiest Android handsets out there. The phone's not completely terrible, though. If you happen to like the gimmicks of a split keyboard and a second screen well enough to carry around a brick, the handset's moderately peppy internals may actually serve you well. Charging $100 on-contract for such a phone seems outrageous, though, and you can do far better. If you have to have a QWERTY keyboard on T-Mobile, the Sidekick 4G offers a fantastic one for just $80 on contract, not to mention a far better screen, and if you can settle for an all-touchscreen phone, there's the dual-core G2x and the Galaxy S 4G priced at $100 each. The bar is far too high now for the LG DoublePlay to compete.

More from this stream LG DoublePlay for T-Mobile specs, price, and release date