Hot on the heels of Google I/O -- which ended literally moments ago across the street -- Samsung's holding an intimate event to show off the Series 5 Chromebook that Google had teased during its heavily Chrome-focused keynote event this morning. Specs include a dual-core Atom N570, an HD webcam, 8.5 hours of promised battery life, and a 12.1-inch 1280 x 800 display for half a grand (or $400 without cellular data), which could be a tricky price point considering that full-featured netbooks can be had for under $300. I've gone in close for a first look at one of the first two retail Chromebooks ever to be announced -- so follow the break for my quick take.

Though it doesn't feel particularly light -- and at 3.8 pounds, it's really not -- the Series 5's definitely thin enough to tout some high-portability street cred. The keyboard feels great (there's something about the asymmetric four-way directional pad layout that I like), but Cr-48 users will be delighted to know that the full-size touchpad seems at least marginally better at first blush (and the "clickiness" of it is nearly perfect). Sadly, the keyboard isn't backlit -- so be sure you memorize that Chrome keyboard layout if you plan on doing much browsing in the dark.

On second use, I found that I was having quite a bit of trouble precisely clicking things with the touchpad -- it has a tendency to move the cursor mid-click, which I'm hoping can be fixed through a firmware update or by tweaking sensitivity settings. Scrolling, though, worked well. 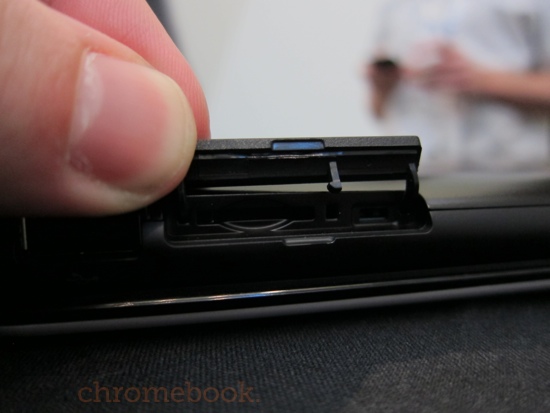 The Series 5's two USB ports are placed on either edge -- a wise design choice that'll prevent any drama from adjacent cables getting in the way of one another (then again, it seems like there won't be many circumstances where you need to plug two USB devices into your portable web browser). The left edge also features a flap that conceals the SIM slot along with the jailbreak switch (pictured above) which will change the boot sequence and allow you to mess with the kernel, just like Cr-48s of old. As Google insinuated at the keynote earlier today, this "sanctioned" jailbreak capability will be a requirement for retail Chromebooks. The left edge features power, VGA, and a dual-purpose headphone / external mic jack. Notably missing is an Ethernet port, which may be a bummer for those rare occasions when a wired connection is easier to come across than a wireless one. I couldn't get a good sense of how well the speakers perform, but for what it's worth, the grills are pretty small -- quarter-sized or so -- and they're on the bottom left and right. Fortunately, Samsung placed them in a slightly curved area of the shell so that they won't muffle against your desk.

As for the display, it seems just a bit washed out -- there's lots of backlight bleed that becomes noticeable when you're looking at a lot of black. It's a matte finish, which I find is usually best for getting work done... particularly if you don't like looking at your own face for hours on end. Of course, the flip side of that is that it might not be as strong for entertainment -- you know, watching movies on your transcontinental flight -- but if you get down to brass tacks, I'd personally take matte over glossy every time.

If you're curious about performance (who isn't?), we took the machine for a spin through Sunspider and a battery of YouTube videos ranging from SD up through 1080p. Playback was totally solid until we hit 1080p -- the bandwidth that Samsung has on hand isn't quite strong enough for consistent 1080p streaming, but in the rare moments that we had enough buffer, we saw some hiccups that seemed to be horsepower or software issues, not lame WiFi. Sunspider, meanwhile, clocked 1461.9ms for the full test (though it should be noted that these units are running on the dev channel right now, so all stability and performance bets are off).