Let's be honest, there isn't a ton of design innovation when it comes to desktop replacement laptops these days. Okay, there's relatively none. However, Acer's new Aspire Ethos 8951 and 5951, which were just unveiled in Europe this morning, are all about changing that sad trend. The 15.6- and 18.4-inch rigs have all the standard high-end laptop components -- Intel Core i7 Sandy Bridge processors, NVIDIA GeForce GT 500M graphics, and Blu-ray options -- but they also have a secret power. Both models have an ejectable touchpad, which doubles as a remote control. Is it a useful feature? Or just a gimmick to make desktop replacements a bit more exciting? Hit the break for a few images and impressions.

Before we get into that funky new touchpad, let's talk about the overall design of these media machines. I didn't get to spend too much time with the new Ethos laptops, but I immediately took note of the more polished design -- they have been covered in a brushed black aluminum and are offset with some chrome accents. In tact are the flush glass LCDs, however like the Iconia Touchbook, Acer has covered them both in Gorilla Glass. The 18.4-inch system still has five speakers and a subwoofer, and both house chiclet keyboards.

So what's going on with the touchpad underneath that keyboard panel? From afar it looks like your typical touchpad, but simply flip the switch on the front lip of the machine and the touchpad pops out. Surprisingly, it ejects rather smoothly and it can easily be snapped back into place. As you might have guessed, it's powered by battery and charges when docked. Like past Ethos pads, you can launch the MediaRemote mode, which illuminates touch media controls -- play, rewind, fast forward, etc. Or you can use it as a regular touchpad and freely navigate the desktop at a distance. I only got to see the touchpad in action for a few minutes, but it seemed to work as promised and multitouch gestures even worked at a distance. 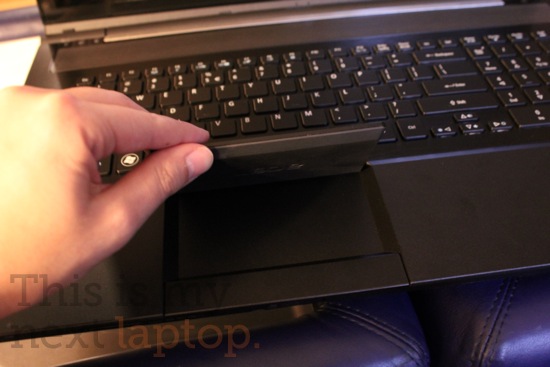 I'll admit that I was skeptical at first of this removable touchpad feature, but I have to say it's a fairly clever idea, especially on a larger multimedia system like the 18.4-inch Ethos. My guess is that plenty of people still use these sorts of laptops to watch movies or stream TV shows. Of course, Acer isn't the first to bundle a laptop with a media remote -- HP and others did this for awhile -- but there's less of a chance of you losing your touchpad and more of a chance of you actually remembering to use it as a remote with it right on the palm rest. Sure, it's not a feature I'd see being useful on smaller screened laptops -- who really needs to sit far back from a 13-inch system? -- but for a desktop replacement it's certainly a nice bit of innovation.

Note: I don't have any details on when the Ethos 8951 and 5951 will be hitting the US, but I assume they shouldn't be too far behind with the May European launch.