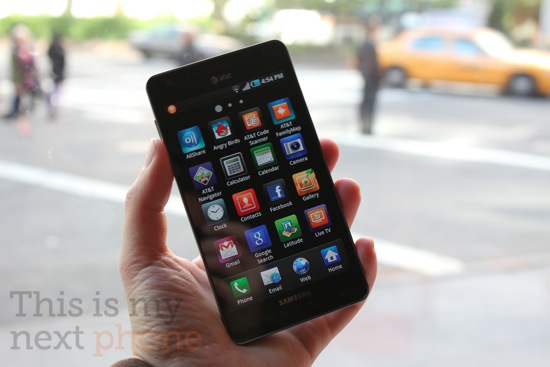 We've gotten confirmation today from a trusted source that Samsung and AT&T are unveiling the production version of the Infuse 4G later this afternoon, a beastly (but just 8.9mm thick) Android handset with a 4.5-inch Super AMOLED Plus display that first debuted at CES a few months ago in prototype trim. A Costco flyer spotted on Phandroid pegs the phone for a May 12th launch -- next Thursday -- so it looks like AT&T won't keep us waiting too long. Official retail pricing will be $199.99 on a new two-year contract.

Update: It's official! The Infuse 4G will support Category 14 HSPA+ capable of theoretical downlink speeds up to 21.1Mbps, AT&T's first true HSPA+ handset. The in-store date is Sunday, May 15th. Interestingly, the $199.99 price is straight-up -- no pesky mail-in rebate required. The first half million buyers will also receive a $25 credit good for use on content in Samsung's Media Hub. Oh, and we almost forgot the most important part: the phone comes pre-loaded with Angry Birds, including an exclusive "Golden Egg" level that, when beaten, gives owners access to "register to win Samsung prizes exclusive to Infuse 4G users."

Update: We got our review unit! Hit the break for some hands-on shots. Oh, and did we mention we got a Galaxy S II to compare it to?

Infuse 4G vs. Galaxy S II
Editor markup for Samsung Infuse 4G for AT&T: comparison with Galaxy S II. This is only visible in the story editor.