Share All sharing options for: HP's ProBook 5330m and its 3G DataPass service appeal tomore than just the businesspeople

HP can go ahead and call its new 13.3-inch ProBook 5330m a business laptop but we're going to call a spade a spade -- it's a killer laptop even for those that don't own a business suit. And well, a glance at the picture above should give you a pretty good idea of why we feel that way. The brand new brushed-aluminum chassis feels solid to the bone -- the bottom is made of magnesium alloy -- and it's two-tone color scheme makes it a bit more daring than the other aluminum laptops out there. On top of that, the .99-inch thick / 3.99-pound machine has a beautiful backlit chiclet keyboard, an HD webcam, and Beats Audio enhanced speakers. You see why we're thinking this is one is a bit more living room than boardroom? It's also one of HP's first DataPass 3G enabled laptops -- jump past the break for the details and some hands-on impressions / shots!

Like we said, the 5330m's all-metal body feel incredibly rigid and the rest of the system also feels top-notch. The keyboard didn't exhibit any bend in our short time with it and the rubberish, mylar mouse buttons felt extremely comfortable when navigating the 13.3-inch matte display. Oh yes, it's a matte screen and it's wonderful -- we just wish there was another resolution option. There's only the standard 1366 x 768 offering.

The 5330m's internal organs match its external strength. It will be available with the latest Core 2011 processors, including new standard voltage Core i3 and i5 processors on the way from Intel. Unfortunately, there's no discrete graphics option -- you're stuck with Intel's HD 3000 -- but it will be configurable with a selection of 7,200rpm hard drives and an 128GB SSD. We don't have exact details on the entry-level $799 config, but we assume it will get you a Core i3 processor, a 250GB hard drive, and the standard four-cell battery. 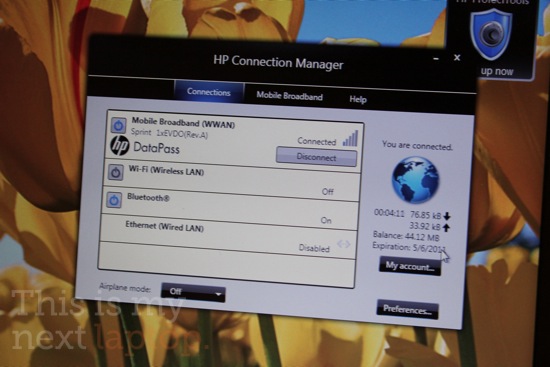 However, the most interesting addition comes with its mobile broadband options. Like most other HP business laptops, the 5330m is available with Qualcomm Gobi EV-DO/HSPA modules. Adding one of those will cost about an extra $100, but you no longer have to sign a carrier contract to get the system on a 3G network -- HP will be offering its own DataPass, which allows users to buy data by the hour, day, or month. Unfortunately, the rates, which are mapped out below, are pretty skimpy (at least compared to what you can get on contract), but at least the preloaded DataPass software will give you an exact reading of how much you've used.

So how does this all seem to work? Well, HP obviously didn't go and buy its own spectrum and start its own wireless network. Instead, it's relying on a company called Peregrine Network, which resells white-label pay-as-you-go service to device manufacturers. The laptops we saw were connected to Sprint’s 3G network, but since HP’s systems can be outfitted with the hybrid CDMA / GSM Qualcomm Gobi chipset for connectivity, Peregrine and HP can buy wholesale capacity on any of the major networks -- and indeed, HP hinted there would be more partnerships to come. Interestingly, according to the terms of service agreement, Peregrine will handle both the billing and customer support for HP DataPass customers.

All in all, it seems like a decent solution for those that have never seen much value in having a specific data plan for their laptop or those that haven't wanted to invest in a MiFi or 3G modem that requires a two-year contract. However, the pricing does seem a bit insane and we're a bit skeptical about having to deal with Peregrine's support and billing infrastructure. Either way, HP will be rolling out DataPass on a number of other 3G-equipped business laptops in the coming months. We're hoping to take a deeper look at the service when we receive our 5330m review unit -- so stay tuned!