OnLive CEO and President Steve Perlman is happy. Speaking on the phone this week, Perlman told us how, early in the company's life, most stories questioned if a streaming game service was even feasible. He specifically cited a March 2009 EuroGamer article, "Why OnLive Can't Possibly Work," which still shows up on the front page of Google when searching "OnLive." But that was years ago, and the June 7th launch of Red Faction: Armageddon — releasing day-and-date with retail, like most of its games these days — will mark the service's 100th game. The conversations these days, he says, are much different.

In conjunction with the milestone, and with next week being E3, the company is making several big announcements today. A universal controller designed to work with all OnLive-compatible devices. A play for the UK this fall. Facebook integration. Support for Intel CE4100 — and a rather bold assertion straight from Perlman that 75 million TVs and Blu-ray players will be sold this with OnLive in tow. All this and more after the break!

This past January at CES, OnLive announced a partnership with Vizio to bring its app to Via Plus TVs, Via Blu-ray players, and Android phones / tablets later this year. But it's been clear that was just a stopgap, one page out of the Netflix playbook, and OnLive seems game to put itself on as many devices as possible. Today the company also announced support for Intel's Atom CE4100, the embedded processor used in Google TV and other set-top devices like Boxee.

Perlman told me very specifically that he anticipates 25 million TVs and 50 million Blu-ray players to be sold this year with OnLive bundled in. That doesn't equate to 75 million new accounts, but it certainly opens the doors for more opportunities, and he tells us that Microconsole owners are more active users (read: they buy more games). Perlman wouldn't budge on naming what new products will be coming out to help reach that goal — "they're just not used to announcing [at E3]" — but said that the respective companies should be making their unveilings throughout the summer and into the fall.

OnLive launching in UK this fall

Starting June 7th at 8PM BST, gamers across the pond can visit OnLive UK and reserve a Player Tag. The service will launch this fall, "well in time for holiday shopping," with a library of over 100 games. Trans-Atlantic multiplayer will be supported but not necessarily with all games (bandwidth-permitting, Perlman told me).

There'll be other international markets after Great Britain, but Perlman wouldn't reveal a timeline for those just yet. "The issues are less about engineering and more about business," he said, citing PEGI ratings as an example of hurdles required to cross. 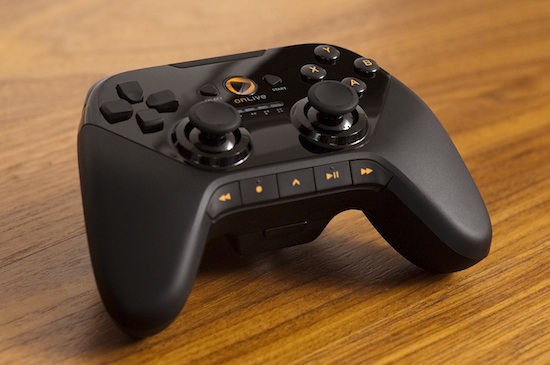 It'll look pretty much exactly like the current bundled OnLive Microconsole gamepad, only with multiple radios to support almost any OnLive-compatible device: TVs, PC / Macs, tablets / smartphones, media players, and IPTV / cable boxes. Perlman said that these devices will be able to support up to four controllers at once, either wirelessly or connected via USB. Perlman tells that while it technically supports the iPad, whether or not Apple approves it for use is still up to the folks in Cupertino.

Some of the other interesting news items:

Is OnLive trying to unseat the big gaming platforms? Perlman told me he believes the service is "complementary" to them, including Valve's PC-based portal Steam. When asked about any conversations with the likes of Microsoft or Sony, Perlman has said he's "talked with everyone" in the industry but wouldn't elaborate further. (Note: I wouldn't read much of anything into that.)

So with all that server-side processing power, couldn't OnLive pull off games that would be impossible on currently-available gaming hardware? Yes, Perlman said, and the company will be showing some of that off at the company's E3 booth. "Our first exclusive," he called it, but we'll have to wait until next week to find out.