Last week Toshiba revealed some more details on its long unnamed 10.1-inch Honeycomb tablet, including its $429 starting price, but this morning we got the real deal — some solid time with what's now officially called the Thrive. Sure, we had already seen the hardware back at CES, but it's now running Honeycomb 3.1 and packaged with a few of Toshiba's own apps. So is this tablet finally ready or does its extra heft immediately pull it out of the extremely fierce Android tablet race? Hit the break for impressions and a hands-on video. 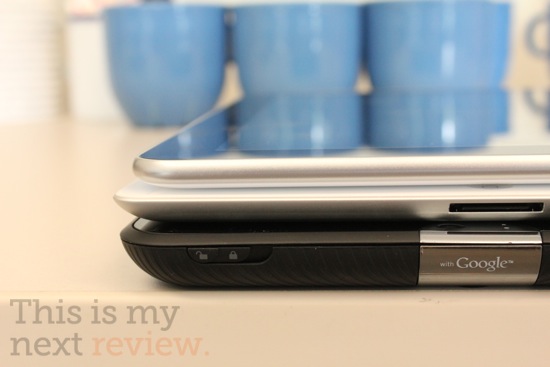 There are really no surprises with the Thrive's hardware, especially if you've read some of my previous hands-on reports. The tablet has an extremely comfortable rubberish back with raised diagonal lines. And while that may just sound like a nice description, it really makes the entire slab comfortable hold. It's certainly easier to grip than Moto's chiseled Xoom. But is that enough to erase the fact that the 0.6-inch / 1.6-pound tablet is about .27 inches thicker than both the 1.33-pound iPad 2 and 1.25-pound Samsung's Galaxy Tab 10.1? (Yep, that's the iPad and the Tab 10.1 stacked on top of the Thrive up there!) That ultimately comes down to personal preference and if you're into sacrificing thinness for the Thrive's full-sized ports.

Indeed, that seems to be Toshiba's major point of differentiation here. You'll see in the video and in the gallery below that the Thrive is well-stocked with full-sized ports, including USB 2.0, HDMI, and micro-USB jacks. It also has a SD card reader, 3.5mm headphone jack, and a docking port for its video / audio accessories. See, that extra width is good for something! The other major difference? The back cover detaches and you can swap in a new battery or buy a new color cover for $19.99.

Toshiba's claiming IPS-like quality on its 1280 x 800-resolution display, but it really doesn't seem as crisp as the panel on the iPad 2 or the Eee Pad Transformer. That said, it is quite bright and viewing angles seemed strong. As you can hear in the video, the screen is backed with some haptic feedback -- I tend to disable that with these tablets since I can't stand the sound when typing, but I realize I may be in the minority on that. Speaking of sound, the speakers actually sounded decent in the short demo.

Software-wise, Toshiba's keeping things pretty true to the stock experience. There's no reskinning or additional widgets. However, it's preloading a slew of its own apps, including a pretty handy new File Manager. There's a brief look at that in the video below, but I'll be interested in testing how that works with peripherals when I get a review unit. Additionally, there's the expected e-reader and RSS apps. Oh, and while you have full access to the Market, Toshiba's got its own App Place, which is really a secondary store of handpicked apps. The company thought it would be useful to organize tablet apps in its own store, and if they can actually pull that off, it doesn't seem like such a bad idea, considering the Market is really disorganized when it comes to Honeycomb specific apps at the moment. The store was slow to load on the unit I saw, but hopefully that will be worked out before these head to retail.

Overall, performance seemed in line with the Xoom with 3.1 — transitions between screens was smooth, scrolling was snappy, and apps launched quickly. Of course, that makes sense since the Thrive also has a Tegra 2 processor and 1GB of RAM.

At the end of the day the Thrive is just another Honeycomb tablet with some slight modifications, including full-sized ports, a swappable back / battery, and some extra apps. Those are notable differences, but something tells me they won't be enough to take most people away from the other very thin options out there. However, the 8GB version of the tablet will go for $429 when it hits in July, which will make it one of the cheaper Android 3.1 tablets on store shelves (the Eee Pad still has it beat at $399). And well, that South Park episode may have been right -- price may just be what makes Toshiba's tablet different for some.

Stay tuned for the full review in the next couple of weeks.