True to this morning's early leaks, TabCo is indeed Fusion Garage, and its Grid 10 is ready to clear up the original JooJoo tablet's terrible reputation. That doesn't seem like an easy task, but CEO Chandra Rathakrishnan took the virtual stage this morning to reveal quite a bit about what makes the new 10.1-inch tablet different from the rest, including its new crazy, Android-based Grid OS. Hit the break for the full details. 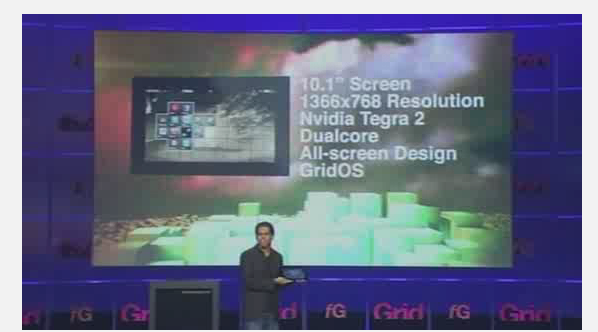 We didn't get a ton of information on the specs, but Chandra revealed that the 10.1-inch screen has a 1366x768 resolution and the tablet is powered by an NVIDIA Tegra 2 processor.

Claiming that Android is the "red ocean," the Grid 10 doesn't actually run Android Honeycomb 3.X, but rather runs its own Grid OS based on the Android kernel. The homescreen consists of different "clusters" that are arranged on, well, a grid. From the brief demo the clusters are broken into different categories, including social, messaging, etc., but you can rearrange them and create new ones by dragging and dropping apps. It actually seems pretty neat and it sure looks to beat the JooJoo's original browser-only OS.

The OS also has a "chromeless browsing experience," which seems to be highly integrated with Bing. We have to say both the browsing experience and the panable homescreen seems pretty slick, though we'll hold our judgement until we see one of these in person. Oh, what about apps? Apparently, the tablet will be able to run Android apps and it will come loaded up with Fusion Garage's own Grid Shop. Also, don't forget the Grid OS will also run on Fusion Garage's promised Grid 4 smartphone and will support some syncing capabilities across both products.

While JooJoo owners out there are actually going to get the Grid 10 for free (yes, free!), new buyers will be able to pick up the WiFi version for $499 and the WiFi / 3G model for $599. Both will be available for pre-order today and will be shipping on September 15th. We've been promised a chance to see the Grid 10 in person later this week, so stay tuned for impressions.

SINGAPORE (8/15/11)-----Fusion Garage today launched the innovative Grid-10 tablet computer while revealing itself as the brand behind TabCo, the parody company that captured industry and consumer attention over the past eight weeks. The Grid-10 is Fusion Garage’s second generation tablet and brings a host of new features to the tablet market including a new operating system ,a dynamic user interface based on the semantic web that offers "predictive intelligence" and the highest resolution display available.

On the same global webcast, Fusion Garage CEO Chandra Rathakrishnan demonstrated the Grid-4 smart phone, a standalone smart phone that also works in tandem with the Grid-10 tablet. The Grid-4 and Grid-10 take advantage of the company’s new Seamless State capability. Seamless State lets users consume content on a Grid-10, pause, and pick up that same content exactly where they left off while switching to the Grid-4.

"After eight weeks of being a brand behind a parody brand, I am excited to be talking to you directly today as the face of Fusion Garage," said Rathakrishnan on the webcast. "The TabCo campaign set very high expectations. It would be madness for me to have undertaken the TabCo campaign if the Grid-10 couldn’t live up to the billing. We are here today to begin the process of justifying the expectations we have set. We believe it is a very special product."

THE GRID-10: A NEW GENERATION OF INNOVATION STARTING WITH A NEW OPERATING SYSTEM
The Grid-10 brings a new level of innovation to the tablet market with features and functionality not found on any competitive model. It tablet was designed nearly from scratch without relying on pre-existing approaches to tablet functionality and without relying on re-skinning an existing operating system.
At the heart of the Grid-10 is the Grid OS, a new tablet operating system which powers a dynamic user interface. Fusion Garage took the core of Google’s Android operating system and developed a completely new user experience on top of it.

"This is not a re-skinned version of Android," said Rathakrishnan. "What we did with the Android kernel is akin to what Apple did when it created the Mac OS. They built a completely new OS on top of UNIX BSD and we took exactly the same approach with Android. This approach gave us the stability of Android and allowed us to bring a new level of functionality, aesthetics and flair to the tablet market. It also allowed us to power a completely new type of user interface."

THE GRID USER INTERFACE CHANGES THE WAY USERS INTERACT WITH A TABLET
The Grid UI is entirely gesture based (except for keyboard input) and eliminates the need for any buttons on the Grid-10 beyond power on/off. The gestures allow users to navigate the device naturally, easier and without restriction. Even accessing the device is new – rather than slide a bar, the user signs on – literally – with a signature. The gesture-driven UI essentially reinvents the touch interface. Users can pan around an almost endless grid that is like a large table space. Apps and other desktop icons are placed where the user wishes within categorized clusters of their choosing on the Grid-10 home screen.

Additionally, as featured in the TabCo campaign, the Grid-10 UI offers wheel-based interaction. A finger tap brings up a wheel icon with spokes that offer various functions. By sliding a finger around the wheel, the user chooses the desired functions such as edit, search, buys. etc. The gesture-driven UI and associated wheel-based interaction provide a host of associated features which help set the Grid-10 apart from competitive products.

These include:
Built-in "Predictive" intelligence: Based on the concept of the semantic web, the Grid UI anticipates user needs for actions and information in several ways including:
Intelligent Notifications: These determine the time of day an event takes place and, for example, offers time-based suggestions, such as restaurant recommendations near a user’s GPS-determined lunch location. Recommendations are pulled from various web locations such as Yelp!

Intelligent Calendar Integration: This determines if a user has an appointment and, for example, suggests the best driving route based on traffic condition. It also can recognize a restaurant name in the user’s calendar and offer reviews, addresses, maps, and other related information.
Smart Searching/Buzz Recommendations Engine: The Buzz Recommendations Engine powers Smart Searching.

Smart Searching and Buzz Recommendations are based on word association technology. When a user highlights a word (such as "Transformers") automatic search recommendations are offered to the user in the most likely categories (Wikipedia, International Movie Database, online stores to buy the video or associated toys.)

Buzz delivers recommendations on broad categories of word choices such as products, people, music, restaurant names, and more. It also delivers associated consumer sentiment on any given search by scanning Twitter for previous tweets on a given subject and provides a sentiment analysis of the topic to provide positive, negative and neutral percentages. For example, if the movie Transformers is highlighted and the Buzz option is clicked, users will be able to see the corresponding sentiment from Twitter.
Grid’s Heartbeat feature gives users a full picture of their world as it happens. Appointments, applications, messaging, downloads, notifications and contextual information are all available at a glance. Users pull in Heartbeat with a two-finger gesture from the right side of the screen and can then multitask between screens of open applications with each giving a complete view of the full application.

MEDIA SUITE SOFTWARE MAKES GRID-10 ONLY TABLET TO TAKE ADVANTAGE OF iTUNES CONTENT
Fusion Garage’s Media Suite software runs on the user’s home computer (PC or Mac) and enables the Grid-10 to be the only tablet that can find, transport and play iTunes content on a non-Apple tablet. At the time of installation on a user’s desktop computer, Media Suite scans all music, video and photographic content, copies it and seamlessly transfers it to the Grid-10 exactly as it was originally organized by the user. It doesn’t matter if the content was originally purchased from iTunes or organized within Windows Media Player, it can now be enjoyed on the Grid-10. Only DRM-protected content cannot be transferred to the Grid-10. Content can be transferred using WiFi or a USB accessory from Fusion Garage.

"We want to give people the opportunity to experience a new platform while enjoying the content they own without limits," said Rathakrishnan. "Whatever you have in your content library elsewhere, you will have on the Grid-10. "

The Grid-10 also comes pre-loaded with a set of full-feature native software applications. Fusion Garage will supply an applications suite that includes email, a video player, a music player, photo viewer along with other apps that you would expect of a tablet.

Fusion Garage will launch its own app store - The Gridshop - this fall as developers begin to make applications available to the company. The time gap is attributable to the stealth approach required by the TabCo campaign leading up to the Grid-10 launch. Users will, however, have immediate access to other 3rd party application stores, such as Amazon’s app store and its broad array of content

AND WHEN YOU’RE READY TO HEAD OUT, YOUR CONTENT FOLLOWS YOU VIA STATE SYNC
Users can enjoy their content even more on the new Fusion Garage devices via the company’s State Sync. This allows the transfer of content from one Fusion Garage device to another and to rejoin the content exactly where the user left off on the previous device. While consuming content on a desktop PC or Mac or on a FG device, a user can hit "pause" on that content, leave that device behind and begin consuming the same content at the exact point of pausing on another FG device.

EXPERIENCE YOUR CONTENT VIA THE INDUSTRY’S HIGHEST RESOLUTION
Great features and content aren’t worth much if a tablet’s screen resolution can’t keep pace. The Grid-10 has the highest resolution of any tablet – 1366x768 with an aspect ratio of 16:9 – providing a widescreen experience not found on other tablets. Videos, pictures and web surfing have never looked better than they do on the full screen, visually impactful Grid-10.

Fusion Garage has taken the visual experience one step further with motion picture-class animations.
"Apple products look the way they do visually as you use them largely because of the animations that move content between screens or enable actions to appear smooth visually," said Rathakrishnan. "We’ve gone one giant step further and provided a new level of ‘eye candy’ through motion picture-class animations. These aren’t the standard fade in/fade out. These are a powerful and visually demonstrable change to what one sees from the standard Android OS-based tablets or on industry-leading devices from Apple."