The WIMM One, a postage stamp-sized piece of circuitry running Android, is one of the more interesting gadgets to pass through our offices in the past few months. It's the first offering from WIMM Labs, who has partnered with Foxconn to develop the tiny module that could be used in a variety of devices -- watches come immediately to mind, but you're encouraged to use your imagination. The idea centers around "wearable imagination" (which just so happens to make up the acronym in its name), but this isn't just another smart watch -- head past the break to find out why.

The focal point of the tiny gadget is its one-inch square transflective TFT display with a 160 x 160 resolution. Though the screen is glossy and backlit, it can be put into a reflective mode by sliding two fingers across the front for easy viewing in direct sunlight -- it's not Pixel Qi though, we asked. Inside its water resistant shell, there are Wi-Fi, Bluetooth, and GPS radios, along with a magnetometer, an accelerometer, and a vibrate motor. 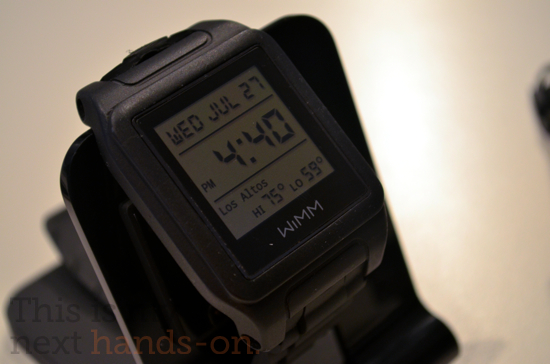 The entire module is made to be, well, modular. We were shown various watch bands that you simply pop the WIMM One into, but things like music player adapters and bicycle attachments are apparently in the works. A small set of sensors along the back allow it to communicate with a charging dock, and the company hopes to differentiate itself from other makers of "smart watches" by offering these different enclosures. Of course, comparisons to Fossil's MetaWatch -- which should be shipping this month -- are inevitable. We haven't been able to see either product in its final form yet, but clearly the WIMM One is designed to offer a higher level of functionality in exchange for a lower battery life (Fossil promises about a week by the time they're done tweaking the MetaWatch's internals, whereas WIMM's offering should get through one day depending on radio use).

At this stage of the game, Android 2.1 is running under the hood, but that should get bumped to 2.3 by launch. The version doesn't much matter though, since there's a custom skin. Swiping down from the top of the screen reveals a sort of app carousel that houses things like a world clock, calendar, and alarm -- though eventually you'll be able to add additional ones through an online portal. The same online portal is where you'll manage calendars that sync with the module, install apps, and manage other various settings for the device. That's right: WIMM envisions that companies producing devices on its platform could offer their own app stores, and third-party developers will be able to plug in. 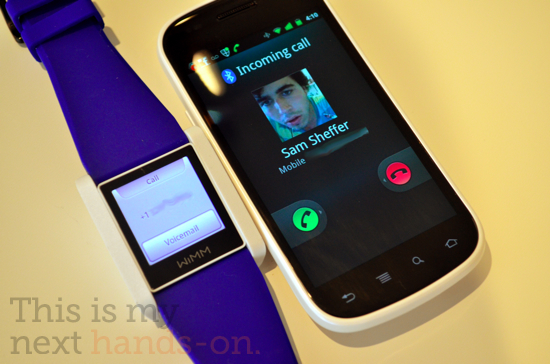 Another selling point of WIMM's design is its phone integration. Once you're paired via Bluetooth, the module will alert you of incoming calls or text messages, and if you've installed the accompanying Android or BlackBerry app it'll show the contact's information as well. It'll also function as an alarm should your device fall out of the WIMM's Bluetooth range.

Update: The company tells us you can get online via your phone's network connection if it supports Bluetooth tethering -- and if it has Wi-Fi hotspot capabilities, that works too. 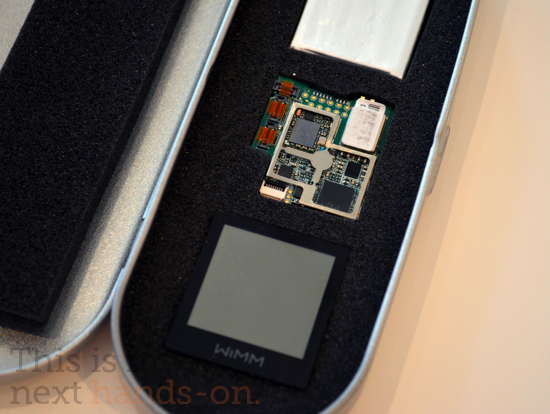 The WIMM One unit is set to ship as part of a developer kit (which includes the module and a watch strap) in around four to six weeks. It’ll cost $299 for non-developers, while those building apps for the platform can have $100 knocked off the price. We're also told that there should be a commercial application of the tech shipping by the end of the year. The success or failure of the platform will undoubtedly rest on whether developers embrace it or not. There's certainly a good bit of potential here, but we'll have to see how things play out when those units start getting wrapped around wrists.