You may remember that back at CES, Toshiba showed up with a clunky 15.6-inch Qosmio laptop with a glasses free 3D display. With a large power pack strapped to its cover, it was far from ready, but eight months can make quite a difference. That same 15.6-inch rig (or what is now the Qosmio F755) is now prepping for its worldwide debut, and starting on August 16th the 3D-equipped laptop will be available at US retailers for a starting price of $1,699. It's not a bad offer when you consider the base specs — a Core i7-2630QM processor, 6GB of DDR3 RAM, Nvidia GeForce GT 540M graphics, and a 750GB hard drive — but, of course, the differentiating feature here is that glasses-free display. So, has Toshiba really improved the three-dee quality or is it still the same old choppy, nausea-inducing experience? Hit the break for some quick impressions.

Before I jump into my thoughts, let's take a look at what's going on with the display and the 3D technology. The F755 has a 15.6-inch 1920 x 1080 resolution panel, but that's only the resolution in 2D mode; when you switch to 3D mode you drop down to 1366 x 768. The screen is similar to what you'll find on the Nintendo 3DS — it's got a parallax-barrier 3D LCD — however, Toshiba is also using the webcam in conjunction with facial recognition software (called SuperD Face) to track your eyes / movements and solve that problem of 3D dead zones / off-angle viewing. It certainly provides better viewing angles than I saw in January, however, it's still very much only meant for one person and close-to-center viewing. The system was quick to track my movements; however, there's still a small adjustment which can make the 3D effect flicker. 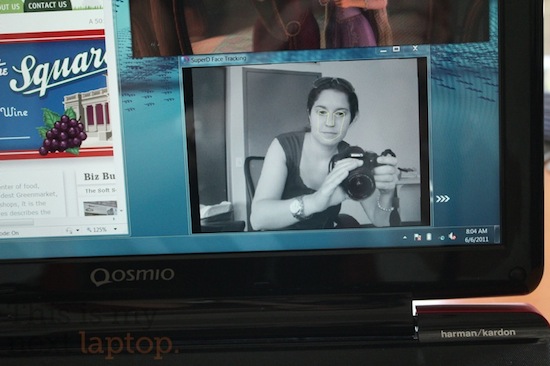 The 3D viewing experience seemed pretty solid — that is, if you aren't seriously affected by what 3D does to your brain, like some around here! A 3D Blu-ray looked great at full screen, though the depth didn't seem as pronounced as it usually does with Nvidia's 3D Vison / active shutter glasses. Naturally, 2D to 3D converted content didn't look as sharp or three dimensional as pure 3D footage. (Toshiba makes conversion really simple with this touch-sensitive button above the keyboard.) Interestingly, you can also choose to watch 3D in one window and look at 2D content in others (for instance, a browser or document) — although, I'm not really sure why you'd really want to do that.

All in all, there are some impressive improvements here, although that's until you hear that there's no 3D gaming capability at the moment. According to Toshiba, the gaming support will come in November — it's working with Nvidia on fine-tuning the drivers for the display and tracking software. That seems like a pretty big bummer, considering most seem to be picking up 3D laptops with first-person shooters in mind, but Toshiba's hopeful early adopters won't mind come mid-August. Hey, I never said eight months made for a completely finished product.