Samsung might have just announced a trio of new Galaxy S II phones a few hours ago, but it's shifting gears fast to some brand-new laptops. And they're not just your run-of-the-mill systems. The 14- and 15.6-inch Series 7 laptops might not be as thin as the Series 9, but they've got aluminum finishes, backlit keyboards, and some fast-boot technology. And the $999 starting configuration comes with a quad-core Intel Core i7 processor and AMD discrete graphics. See, not just your boring budget notebook -- hit the break for the lowdown on the specs as well as some hands-on impressions / video.

Samsung's packing the 14- and 15.6-inch Series 7 laptops to the brim with fast innards, and well, that's kind of the point of the new series. All the 15.6-inch versions come with Intel's 2.20GHz quad-core Core i7-2675QM processor, while the 14-inch model takes it down to the dual-core Core i5-2430M processor. Joining those powerful processors are discrete AMD graphics with 1GB of VRAM -- the 15.6 gets AMD's latest HD 6750 and the 14-inch the 6490M graphics chip. Yes, for $999 you get a 15.6-inch laptop with a quad-core Sandy Bridge processor and AMD graphics.

However, those seeking some solid state drive power will want to jump on up to the $1,149 model, which includes both the standard 750GB hard drive and also an 8GB solid-state drive. Referred to as Express Cache (EC), the drive lives on the motherboard and will store frequently used applications. According to the product manager, you can't manually assign what lives on each drive, but rather it intelligently places your frequently used files and programs on the drive so it can open them faster. (It sounds a lot like the Intel Smart Response technology available on Z68 desktop motherboards.) Still, even those configurations without the EC technology are promised to resume from sleep in three seconds and boot in 20. 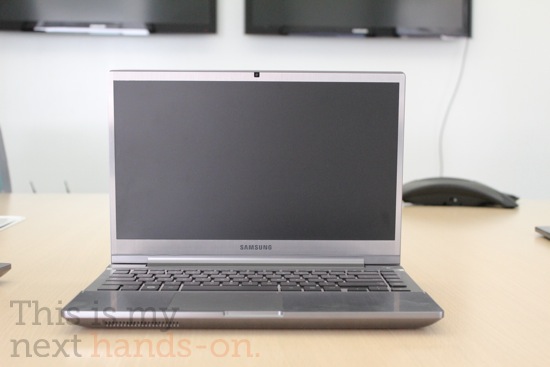 But specs aren't the whole story here. The Series 7 is a well-designed laptop -- it looks like a cross between the HP Envy and the MacBook Pro -- and while it's not entirely made out of metal like some others out there, the lid, palmrest and bezel are made of aluminum. The plastic bottom of the system does feel a bit cheaper than the rest, but overall it feels tough. More impressive may be what's on the deck -- the chiclet keyboard is backlit and there's an oversized single-button touchpad (which apparently is made by Elan, rather than Synaptics). The touchpad's off-center location is sure to bother some, but in terms of responsiveness it seemed quite decent. Of course, that was one of Samsung's major pain points on the Series 9, so I'll wait on my review unit to make a final call on that.

Lastly, the 1600 x 900-resolution, 300-nit display (there's no higher option on any of these) is matte and quite bright. However, the 14-inch display (pictured above) has a very thin bezel, which has enabled Samsung to fit it into a 13-inch chassis. It's similar to what we've seen with LG's Shuriken display, though Samsung claims it is using its own technology -- naturally, borrowed from the TV side of the business.

So, how do the systems fare in terms of weight and size? Not too badly given what they pack inside. Both measure a uniform one inch thick while the 15.6 version weights in at 5.05 pounds and the 14-incher at 4.30 pounds. You'll see in the images below, both have slot-loading optical drives and USB 3.0 ports.

I'd be lying if I said I wasn't impressed with what Samsung seems to be doing here with the Series 7. It's wrapping some really nice specs in a solidly built chassis for a seriously impressive price. We'll see if Samsung can bring some decent battery life (it's promising eight hours), but I'd say off the bat, Samsung's going to have a pretty awesome laptop on shelves come October 2nd.