"Wait, you're announcing a Windows 7 tablet now?" Yes, those were literally the words that came out of my mouth when Samsung told me of its new Series 7 Slate. However, despite a move towards Android tablets (of which it has three!) and Microsoft's plans to push ahead with Windows 8 for tablets, Samsung's decided to announce the 11.6-inch Series 7 Slate with Windows 7 Home Premium. So, why exactly? Product Manager Matthew Crocker told me that it wasn't until now that Samsung could create a Windows Slate that addressed "speed, size, and usability." So just what specs and features does this one include to accomplish those things? Hit the break for the full rundown, including a hands-on video and pictures.

In terms of specs, the Series 7 is a lot like ASUS' Eee Slate. It literally has the guts of a high-end laptop, including a dual-core Core i5-2467M processor, 4GB of RAM, and a 64 or 128GB SSD. However, Samsung's claiming to have brought over a lot of its Series 9 features, such as instant-on and sub 30-second boot times. Yet despite those organs, it is said to have over six hours of battery life. The 64GB version, which comes with a stylus, will ring up at $1,099. The $1,349 version will include a 128GB drive, a stylus and both a docking station and keyboard. There's also a 2-megapixel front-facing camera and a 3-megapixel shooter on the back. 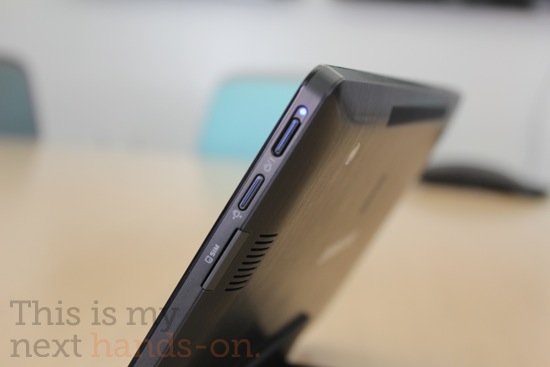 Samsung's done a very nice job of cramming all those components into a .5-inch and sub two-pound tablet. As you'll see in the pictures, it's quite thin and packs a number of ports along its sides, including a full-size USB port, SIM slot, and Micro HDMI. There's not much to talk about in terms of actual aesthetic; the black back is smooth and there's a small Windows button on the bottom bezel, which can be programed to launch a specific app.

However, the most impressive part of this slate is the 1366 x 768-resolution 11.6-inch, 400nit display that's equipped with a Wacom digitizer. The pressure-sensitive stylus glides across the screen and the capacitive screen itself is responsive to finger input. Of course on that latter point, the biggest problem is the software, and while the pen and keyboard make Windows 7 more palatable, finger input remains a huge issue. In my short time with it, I mistakenly poked the minimize window button rather than the maximize and struggled to dig out the Paint program from the Start Menu. Samsung is trying to improve things with its Launcher program, which is basically a series of app homescreens, but that skin doesn't go very deep. Your best bet here is to keep the pen in hand. 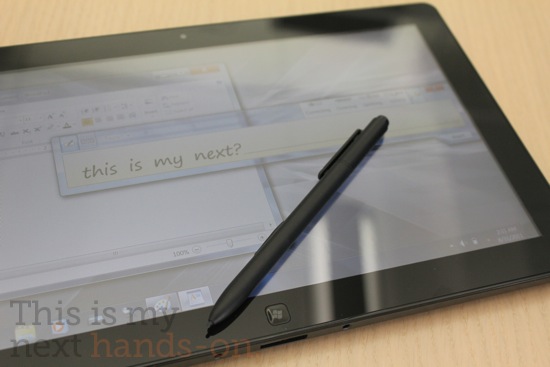 Based on my first impressions, the Series 7 Slate may be the best Windows 7 tablet ever made -- it's fast, the pen experience is smooth, and the hardware is thin and well-built. However, I'm not sure it matters. While the product manager did tell us that it would be upgradeable to Windows 8, there's a very very small market for this type of device and at $1,099 it's not going to be an easy sell (an iPad and netbook can be had for less!). I'm still not sure why Samsung's releasing this right now and not waiting on Win 8, but for those few who have been waiting on a well-rounded Windows 7 tablet for so long may finally have a solid option this October.

Update: Samsung still maintains that it has "every intention on making the Series 7 Slate upgradeable to Windows 8." It doesn't have any details yet on that upgrade path, but plans to partner with Microsoft on it.

Update 2: I forgot to mention that Samsung wouldn't specifically comment on if this will replace the Sliding PC 7 (I did ask!). Samsung's Matt Crocker stressed that it's going with model at the moment and that it's still investigating the slider form factor. In other words, it's probably not coming very soon.