Share All sharing options for: Lenovo IdeaPad U300s ultrabook, U300, and U400 coming this October (hands-on)

It sure is going to be a busy few months of thin and light laptops. In addition to the new Toshiba Z830 Series ultrabook, Lenovo's announcing its very own IdeaPad U300s Intel-approved ultrabook as well as two additional thin notebooks — the 13.3-inch U300 and 14-inch U400. It's a lot of Intel Core processors wrapped in sandblasted aluminum cases, so hit the break for the details on all three systems as well as some in-depth impressions / hands-on video of the U300s. 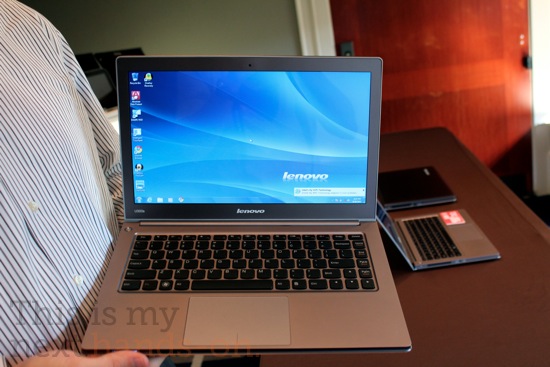 Remember the 12.5-inch Lenovo IdeaPad U260? It was a beautiful aluminum sandblasted laptop with a glass touchpad. Well, the 2.9-pound U300s is that awesome system reinvented with a larger 13.3-inch, 1366 x768-resolution screen and some new additions and subtractions.The vents from the base have been removed, and the keyboard is now breathable so air flows in through the key gaps and out the opening on the left edge. The .58-inch chassis is quite thin, but that means, unlike the Toshiba Z, it's not as well stocked on ports — it only has one USB 2.0 port, one USB 3.0 socket, a 3.5mm headphone jack, and an HDMI port.

Still, Lenovo's managed to cram in a Sandy Bridge Core i7 processor, an SSD (up to 256GB), and 4GB of RAM. However, like Toshiba and Samsung, Lenovo's putting the focus on usage speeds, claiming a 20 second boot time and under five second resume times. So, how about that battery life, which was the U260's biggest pain point? Lenovo promises to have mended that here with a larger cell and eight hours of juice.

I got to spend a couple of minutes with the U300s earlier this week and I almost forgot how much I missed the book style design and soft feel of the brownish aluminum (there will be a clementine orange as well). It's one incredibly solid feeling laptop and the curved keyboard is one of the best out there for touch typists. It is very saddening that the panel isn't backlit, however, Lenovo may make up for it with the smooth feel of the single-button glass touchpad. The U300s will hit in October and start at $1,195. 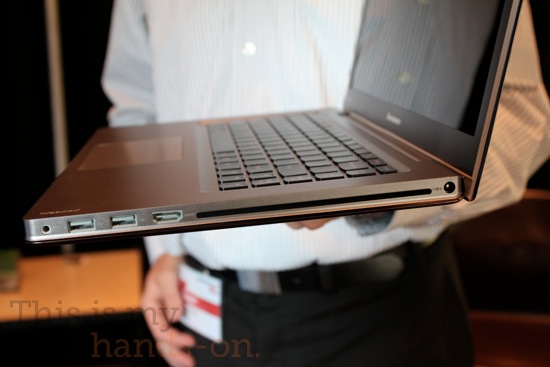 As you might have guessed, the U300 and U400 aren't as slim, and thus don't get the "s" designation. But it's not like these are your average mainstream rigs -- the 3.5-pound U300 is a tad thicker than the s at .72 inches and the 4.4-pound IdeaPad 400 measures .88 inches in thickness. Both are available with Sandy Bridge processors, SSD and hard disk drive options, and up to 8GB of RAM. The U400, however, kicks it up a notch with a slot-loading optical drive and an optional AMD Radeon HD5470M GPU (with 1GB of VRAM). Both are also expected in October for $799 and $849, respectively.