Microsoft's officially kicking off its Build conference this morning with a release of the first version of Windows 8 to developers. The actual bits (or operating system image) will be available to devs at 8PM PT this evening through the Windows Dev Center (dev.windows.com) and will also be distributed at the show itself. But where will all those future apps live? Microsoft's following that up with the announcement of the new operating system's Windows Store. While not actually included in the released preview, the store will be available closer to launch and will include both new Metro-based apps as well as programs "you know and trust on Windows." It's unclear how they will mark legacy apps in the store since those won't all run on the future ARM-based Windows 8 devices or if there will be any sort of meshing of the Windows Phone 7 marketplace. We're hoping to dig up some more answers on that soon, but in the meantime, we've got more information on it all in our piping hot hands-on with the Windows 8 Developer Preview.

Update: The Windows 8 Developer Preview will be available this evening at 8PM PT at dev.windows.com. No activation required.

Update 2: Why wait until 8PM when you can download right now? Yes, that's right, Microsoft's released the Developer Preview hours ahead of schedule. Find it right here. 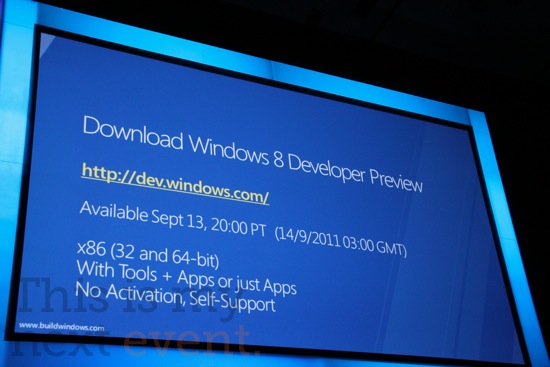 Also follow along at the Microsoft Build liveblog right here!