Windows 8 on a laptop: pictures, video, tips, and hands-on preview

Windows 8 on a laptop: pictures, video, tips, and hands-on preview

Testing out a new OS on standardized hardware is all well and good, but there's nothing like installing a fresh copy on your own machine. Now that the Windows 8 Developer Preview is out, we wasted no time tossing the latest build on our handy Toshiba Portege R705. So, what's it like to install and run Windows 8 on a last-gen Core i3 laptop with no touchscreen? Spoiler alert: it's actually pretty easy.

With our 2.26GHz Core i3-350M notebook equipped with a 5400RPM hard drive, installation took about thirty minutes in all, during which time our machine restarted itself several times and did the majority of its duties while displaying a few lonely, interchangeable lines of white text on a completely black background. Interestingly, although the Developer Preview you can download at Microsoft's site is an ISO image that you'll need to burn to disc or a bootable thumbdrive, Microsoft handed us a special USB key instead, which let us do an in-place install of Windows 8 right over our Windows 7 partition using only a setup.exe file -- at the cost of our existing OS. The installer did display an ominous ultimatum before we began the file transfer which made us fear for our files, too, but when Windows 8 booted half an hour later, we found most of our old programs and documents waiting for us in a folder labeled "Windows.old".

Compared to the tricked-out Samsung Series 7 tablet with its Core i5 processor and fancy multitouch gestures, we didn't figure our laptop would fare all that well... but we were surprised to find that Windows 8 felt slightly more stable on the tried-and-true notebook platform, with fewer crashes and odd glitches. The 5400RPM hard drive didn't make for terribly speedy boot times, though. We averaged about 50 seconds to get to a usable desktop, compared to around 11 seconds for the Samsung slate. That's not bad, though, compared to similar Windows 7 machines, and wake times were decent -- around four seconds each. What could be potentially worrying though, if this wasn't such an early build, is how often our laptop's fan popped on. Though the new Task Manager told us that 2 percent of our CPU time when the device was sitting around, the normally cool and quiet Portege's fan continually shot out warm air even when the OS was idling.

On the plus side, we were genuinely surprised how much less convoluted Windows 8 can feel with a mouse and keyboard at the helm. "I promise you, the minute you use a touch device with Windows 8, the moment you go back to your laptop or desktop, you'll have fingerprints all over your screen," Windows president Steven Sinofsky said this morning, but once we didn't feel pressured to play with our screen, we didn't really miss touch much. Rather than deal with occasionally fickle bezel gestures and touchscreen buttons when swapping back and forth between Windows 8's two UIs, the keyboard and mouse let you switch fluidly. If you're used to pressing Start and then typing while on the Windows desktop to pull up common apps and tasks, that still works here, as does Alt-Tab and an abbreviated version of Windows 7's Aero Flip without the 3D effect.

Furthermore, you can just type from the Start screen to search -- a good bit faster than swiping to find the Search charm and pulling up the virtual keyboard -- and we actually spotted a useful gesture that we haven't been able to replicate with touch. If you hover your mouse cursor at the left side of a window with several Metro apps open, a tiny preview thumbnail will appear, and you can change which app you'd like to drag into the screen by using your mouse's scroll wheel. 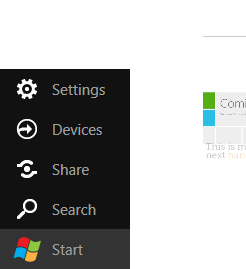 Here are the other shortcuts we've tested so far:

Of course, keyboard shortcuts aren't intuitive the way gestures can be, and the physical peripherals don't necessarily work better -- though dragging apps is far easier with a mouse than a finger right now, you can't scroll across the Start screen nearly as well.

By the way, there's nothing stopping you from installing your very own apps in the Windows 8 Developer Preview, and we gave it a try with little difficulty. Interestingly, if a app would normally create its own program group in the Start menu, Windows 8 will give each item a pinned tile on the Start screen instead -- including uninstallers. 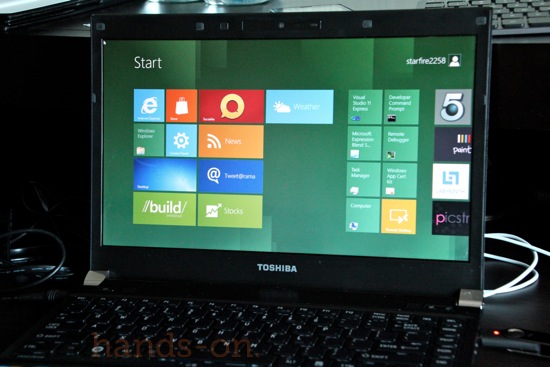 Members of our team who weren’t on the ground with us at Build were initially wary of mouse and keyboard use, but we actually think they translate reasonably well to what seems like a designed-for-touchscreen experience. As we mentioned in our original hands-on preview using the Samsung tablet, the dichotomy of the distinct Metro and desktop UIs feels jarring and somewhat unnatural, but we seemed to take to them better using our traditional setup of a mouse and keyboard. And that's actually one of the main take-aways from the last couple of days -- this OS is about plurality in more ways than one. There are multiple supported architectures, multiple UIs, and multiple forms of input. And at this point, it feels like only a certain selection of them work together. How the rest of them start to play together will hopefully be revealed over the months to come, as Windows 8 transcends its role as developer stomping ground and eventually goes beta.

Joanna Stern heavily polished and contributed to this article.