While the x86 version of the Windows 8 Developer Preview was released last night and attendees were given Intel Core i5-powered tablets, there's been very few public demos of the new OS on ARM devices here at Build. And while we'd love to say that's changing today, it seems all the Win 8 ARM devices are being guarded quite closely. Reference design tablets running the Developer Preview from Nvidia, TI, and Qualcomm are now on display at the show, but sadly, most of them are behind glass with just the Start screen showing. We snapped a bunch of pictures of them and were able to see a short demo of a Qualcomm Snapdragon tablet running the OS (though we were banned from taking video). Hit the break for some shots and some short impressions -- major emphasis on short!

Update: As promised, we tried our hardest to get some video and extra impressions. Check out our hands-on with the Windows 8 Nvidia Kal-El tablet here. 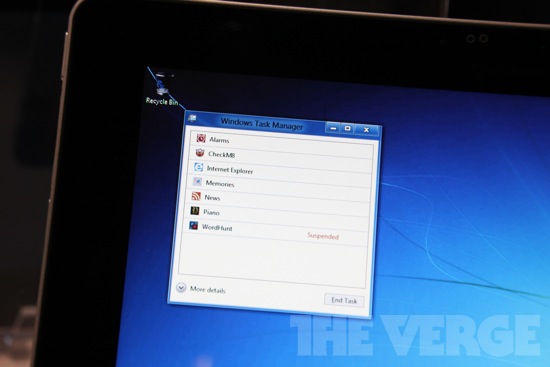 We'll lead with this one since it was the only slate not sealed behind glass. We were able to see Start screen navigation on the 11.6-inch Snapdragon MSM8660-powered tablet as well as three Metro-style apps (IE and two HTML 2D games). The scrolling across the Start screen didn't seem as smooth as the Samsung Developer Tablet, but it wasn't slow by any means. We also caught a glimpse at the switch from the Start screen to the Desktop and open the Task Manager in the Desktop. Like we said, we weren't able to touch the screen ourselves, but we did get to feel the back of the tablet, which was noticeably cooler than the Samsung Dev device. We guess fanless processors will do that!

While all the other ARM licensees are showing dual-core tablets, Nvidia's off in the corner bragging about the fact that its reference design is the "world's first quad-core ARM Windows 8 tablet." Sure, it's a notable thing to brag about, but it doesn't tell us much when it's stuck behind glass with just a Windows 8 Start screen showing!

The same goes for TI. The dual-core 1GHz OMAP4430-powered device was stuck behind glass and running the same HD video on loop, or else just displaying the Start screen with nothing else to show for it. TI did tell us that it expects its dual-core 1.7GHz OMAP 4470 processor to be powering Windows 8 tablets when the OS is ready.

We'll be trying our hardest here to bring you some more impressions of these ARM tablets, but given the way these are being safeguarded, we're fairly confident the ARM build isn't quite up to snuff with what we've seen on x86 so far.