Motorola has been rumored lately to be working on an AT&T smartphone codenamed "Edison" that would likely replace the Atrix 4G in the lineup, and as luck would have it, we had an opportunity to play with one today. When you consider the timeline of events, this is a pretty interesting story: both the Atrix and Droid Bionic were announced as closely related dual-core cousins at Motorola's press event at CES last January, but the Droid Bionic just came out a few days ago after being taken back to the drawing board for a major redesign. The Atrix, meanwhile, came out on schedule back in February, so it's due for some of the upgrades the Bionic has received... and that's where the Edison comes in. Follow the break for pictures and our full impressions. 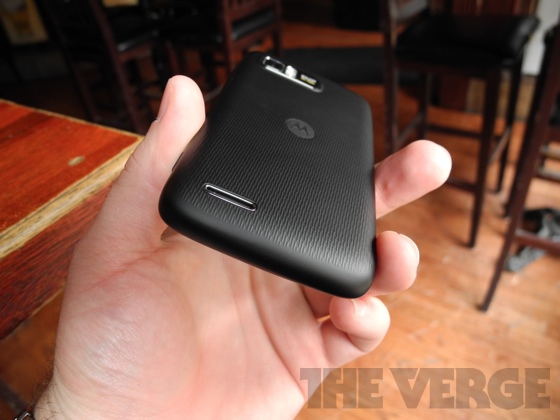 Let's just cut to the chase: this is a lovely phone -- it looks and feels fantastic. I'd argue that the Droid Bionic is both Motorola's best Android effort to date and also one of the best smartphones on the market today, period, and the Edison does a commendable job of translating that feature set over to AT&T. It also backs off the Bionic's harsh, squared-off design language, opting for a curvier look; in fact, at a glance, it almost looks more like an HTC or a Samsung. Regardless of the appearance, the construction seems to be classic Moto: sturdy and on the heavy side (in a pleasant way, not an uncomfortable one).

For controls and ports, you've got a 3.5mm headphone jack centered along the top edge next to a secondary mic (presumably for noise cancellation) along with a flush power / lock button that is fairly easy to press. The right edge has a volume rocker along with a dedicated camera button -- increasingly rare these days -- though we were disappointed to discover that it's single-stage; there's no way to trigger a focus by pressing it halfway down. The left edge has Motorola's typical Micro USB and HDMI ports toward the bottom.

I'd estimate the Edison to be somewhere between 9.5 and 10.5mm thick. Unlike the Bionic, it has no camera bump on the back -- it's even all the way across, and as I mentioned before, it looks nicer. The battery cover is made of a textured hard matte plastic, a little bit like the Galaxy S II's. It shares the Bionic's 1735mAh battery, which is roughly 200mAh down from the massive cell that ships with the original Atrix; it's not known whether there'll be an extended cell available similar to the Bionic's 2760mAh option. 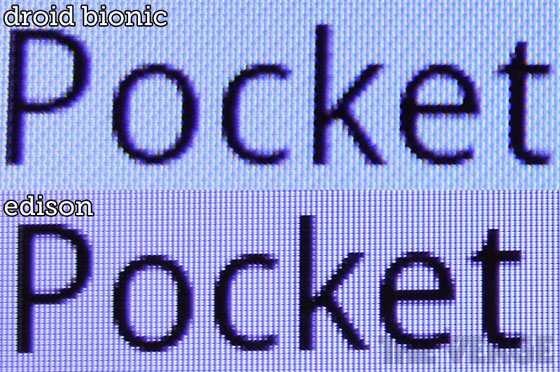 The 8-megapixel camera with 1080p video capture and single LED flash is also a carry-over from the Bionic, it seems (the camera app is also identical). What's different, though, is the screen. Both are 4.3-inch qHD LCDs, but I immediately noticed that the Edison lacked the noticeable hatch patterns on solid shades of gray that you see on the Bionic -- you can really tease this out in the Settings screen, for instance. Sure enough, a macro shot of both displays seems to indicate that they've moved away from the much-maligned PenTile pixel arrangement. I also found that the Edison had a considerably lower color temperature than the Bionic, but the software on the unit isn't final and that could easily be tweaked prior to launch.

The Edison's software is very similar to other Motorolas we've seen launch in the last couple months -- it's an extremely lightweight skin that doesn't much remind us of the Blur of old. The operating system is identified as Android 2.3.5. Crapware is relatively light -- we happened to notice the AT&T Music Store in the app drawer, for one -- and we're told that most of the garbage can be uninstalled by the user, which is nice. 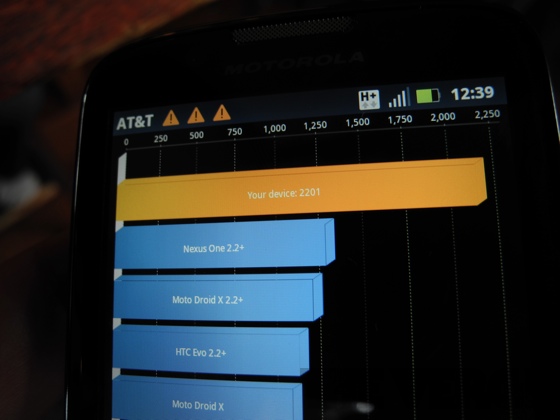 What about performance? We saw Quadrant results between around 2,100 and 2,400, which falls in line with what you'd expect out of the 1GHz OMAP 4. Moto's lightweight skin felt smooth and snappy, though we'd want to take it for a much longer test drive before drawing any conclusions. We saw 1GB of RAM reported, which makes sense considering that this is definitely a Webtop-enabled phone -- the Micro USB and HDMI ports are positioned correctly for docking, and there are Webtop options in the Settings screen. For storage, you've got 8GB internally plus microSD expansion. We weren't able to get it to connect to AT&T's new LTE service here in Chicago, so it looks like HSPA+ is the best that it'll do. Interestingly, like the original Atrix, the status bar shows "H+" instead of the "4G" that our Elevate 4G shows when it's in HSPA+ coverage.

We don't have any information on when the Edison might be available, but we're told that the build Motorola's currently running is quite stable and seems ready to go -- and in our brief time with it, we'd tend to agree. Given all the rumors of an impending onslaught of 720p displays (and, of course, Ice Cream Sandwich) in the coming weeks and months, we'd recommend AT&T get this retailed quickly if they want to capitalize on it; by all appearances, it's a solid device that deserves a little time in the high-end shelf space alongside the Galaxy S II.