Facebook engineer hits the road for Google over iPad app

One of Facebook's engineers, Jeff Verkoeyen, has left the company to join up with Google, and he didn't go quietly. Verkoeyen detailed his frustrations with the company on his personal blog, and most of his grievances stemmed from the failure of Facebook to launch its long-rumored and much talked about iPad app. Yes, Facebook (as you are surely aware) still does not have an iPad application, and though it was widely expected to launch at f8 last week, those hopes were dashed as numerous other updates were made to the social networks ubiquitous takeover of the the net.

Verkoeyen writes that the application has been "feature-complete" since May, meaning that it's been nearly ready for a public beta for almost 5 months, and yet its failed to appear. The company, he writes, repeatedly pushed back the launch of the application, and he even expressed doubt over whether or not the application would ever be released. Verkoeyen could be wrong about that last part however, as Mashable reported just yesterday that Facebook would likely announce its iPad application at the Apple event next Tuesday. We have no way of verifying that, though there certainly wouldn't be a dry eye in the house if it were, in fact, to come to pass. We'll be there live of course, Facebook iPad application or not.

Update: Jeff Verkoyen contacted Business Insider, one of the original reporters of his blog post, to say that his words shouldn't reflect on Facebook as a whole, and that his problems were "personal," rather than institutional. He also updated his blog, removing some details of the iPad app. The post has now apparently been deleted. 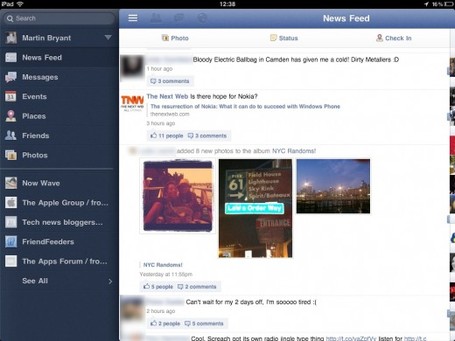