Amazon launches the new $99 Kindle Touch — a touchscreen e-reader in both Wi-Fi and 3G variations.

In addition to the new Kindle Fire tablet unveiled today, Amazon honcho Jeff Bezos has just presented a new touchscreen Kindle at the company's event in New York City dubbed the Kindle Touch. The small device lacks a keyboard, has a traditional Kindle E-Ink display, and can be navigated in three touch zones on the front of the reader. The device uses infrared (IR) touch as opposed to capacitive or resistive touch technology (though the company says the screen is multitouch capable), and employs a new menu system the company is calling EasyReach. The Kindle Touch will be priced at $99 (with Special Offers, meaning you'll have to suffer through some advertising - a point Bezos failed to mention on stage). If you want the device sans ads, you'll pay $139.

A second version equipped with 3G called the Kindle Touch 3G which will work globally will be offered for $149 (or $189 without Special Offers). Amazon claims the devices are 8 percent lighter and 11 percent smaller than the older Kindle, and both versions will ship on November 21st. Both are available for preorder on Amazon now.

We've got more details and a gallery of images and video below the fold, so keep reading, or check out our full hands-on preview of the Kindle Touch right here.

The Touch features a number of new Kindle advancements, such as X-Ray, which allows you to "see all the passages across a book that mention ideas, fictional characters, historical figures, places or topics of interest, as well as more detailed descriptions from Wikipedia and Shelfari."

The devices also take advantage of Amazon's new deal with public libraries, allowing you to borrow books on the device as you would a hardcopy. 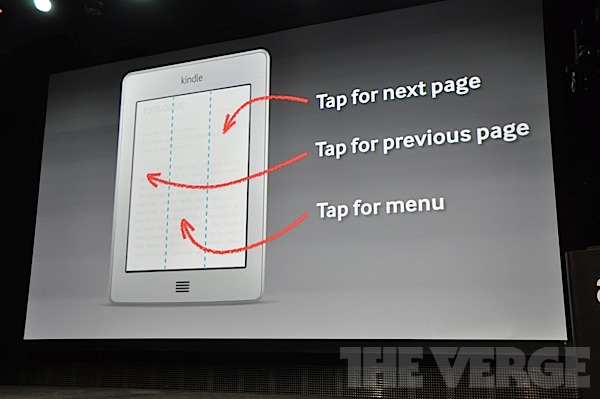 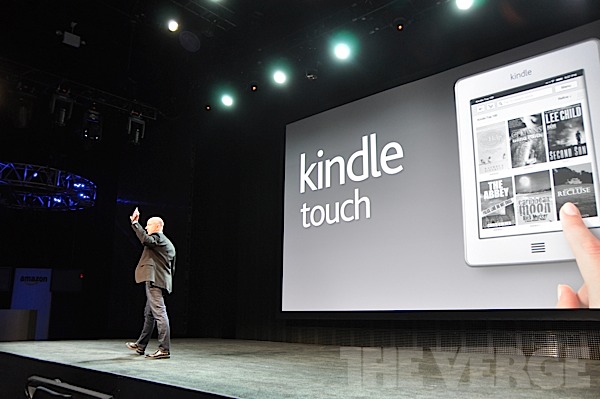